Polk County Relay For Life Makes a Difference in Community

Polk County Relay For Life makes a difference in community, for research
by Andy Philpot 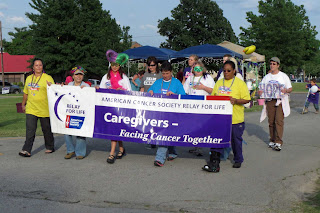 As Relay For Life is now a well established tradition in Polk County, it serves many more purposes that meets the eye.  Co-chairs of the local Relay For Life, Regina and Richie Lawry, can tell you that while the event itself is one weekend of the year, the efforts are a year -round effort.  This year-round effort that the Lawrys have instilled into making Relay For Life as successful as possible in our communities, the same commitment is followed by a number of organizations, businesses, and individuals, who seek to raise as much money as possible for Relay For Life.  This money in turn goes toward cancer research, which in turn leads to more treatments of the many cancers our friends and family encounter, which in turn leads to many more birthdays and reasons to celebrate. 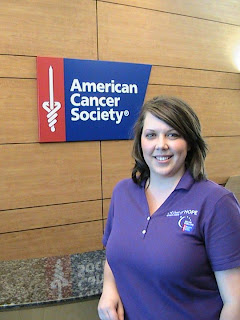 Helping to emphasize the significance of every dollar that is raised in community Relays, two different testimonies were shared at this year's Polk County Relay For Life.  Keisha Pittman, from Arkadelphia, shared her cancer battle testimony during the opening ceremonies of this year's Relay, and emphasized that every dollar amount is important toward the shared goal of defeating cancer.  She spoke how community Relay For Life events in both big cities and smaller towns are all invaluable because they all go toward the common goal.  The funds of Relay For Life are what helps make continued research and advancements in cancer treatments possible. 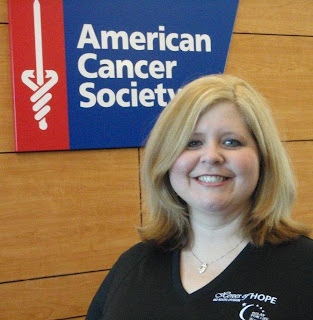 Deidra Porter, of Conway, shared her testimony just before the Luminaria ceremony, and how her cancer experience has her that much more an advocate for Relay For Life events throuought the devoted communities.  Porter was diagnosed with cancer, and moments before she was to begin her first treatment, she learned she was pregnant.  Like Pittman, Porter's testimony was both emotional and inspirational.  Porter not only endured cancer and now can share her story with others, but she also has a healthy son that has endured the treatments.  Sharing the exact sentiment of Pittman, Porter praised Relay For Life and how every dollar raised in important to the overall goal of seeking an end to cancer.

Pittman and Porter traveled to Mena to share their testimonies with the Polk County Relay For Life participants, and their stories are added to the always growing list of cancer survivors that do hear the words "You Have Cancer", but endure the battle and can proudly wear a purple shirt as they walk the Survivors Lap. 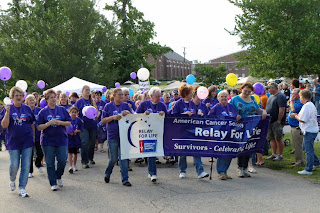 Relay For Life is held for the purpose of celebrating the survivors, remembering those we have lost, and giving hope that one day the world may be cancer free.  Through the celebrating and remembering, the success gets passed along to the American Cancer society through the fundraising that happens all year long.  With each Relay For life that takes place, it adds to the overall funding that can be used toward cancer research and treatments. 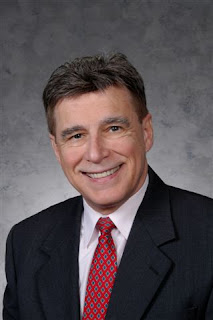 Relay For Life has been raising money for the American Cancer Society since 1985, when Gordy Klatt came up with a way to raise funds for his local American Cancer Society office in Tacoma, Washington, and show support of all his patients who had battled cancer.  He did this by spending 24 hours circling the track at Baker Stadium at the University of Puget Sound.  He ran more than 83 miles and his efforts raised $27,000 to fight cancer.  It has only gotten bigger and better from there. 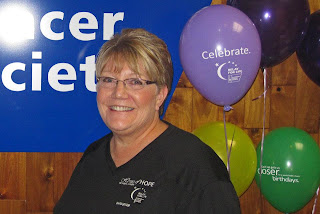 Regina Lawry of Arkansas started volunteering for the American Cancer Society at an early age, when her mother would go around their neighborhood collecting money for the organization. “She told me you just never know who it might help,” says Lawry.
Turns out, the money collected by Lawry and her mother may have helped their own family.  Regina’s mother would eventually battle leukemia and her father faced colon cancer.  Three of her sisters were diagnosed with breast cancer.  Her brother fought skin cancer.  Regina is the only one of her immediate family to not get a diagnosis.  “I feel like I live my life waiting for the other shoe to drop,” says Lawry, who manages a credit union in the town of Mena.
That’s why Lawry still volunteers for the American Cancer Society.  She says she knows first-hand that research is critical, by again, watching her mother. “During her treatments she participated in a bone marrow study.  At that time they told her it was very painful and would not help her but the research would help someone else down the line,” says Lawry.  “Twenty years later a bone marrow transplant saved my sister Lenora’s life.” 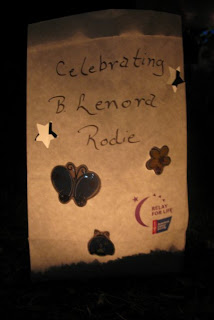 The American Cancer Society helped fund the development of the bone marrow transplant.  That procedure helped Lawry’s sister live 13 years more until the cancer returned.  Lawry cared for Lenora during that time, which included helping her get to sessions of the American Cancer Society’s Look Good…Feel Better program.  It helps women who are undergoing treatment deal with skin and hair changes, offering them free wigs and tips on how to apply makeup.  “Lenora put her face on every morning before we left the house for her bone marrow treatments.  She said she had to have a little dignity,” says Lawry. 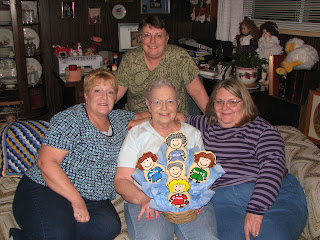 Meantime, one of Lawry’s other sisters was battling breast cancer too.  It was her sister Roberta who introduced Lawry to the American Cancer Society’s Relay For Life, an event where participants form teams to raise money for patient programs, research and much more.  Survivors are celebrated, those lost to cancer are remembered and every one at the event gets a chance to fight back against the disease through Relay.  “When I watched my four siblings walk around the track arm in arm during the Survivor’s Lap and then saw my mother’s name and my father’s name on luminary bags, I knew this was something I had to get involved in,” says Lawry.
Since then, Lawry has been involved in her local Relay For Life event, and representing her community as a Hero of Hope.  It’s an opportunity for her to travel and share with others the impact of the American Cancer Society. “I know the American Cancer Society makes a difference.  I’ve seen it in my own family,” says Lawry.  “The American Cancer Society funded research that helped develop treatments for leukemia, Tamoxifen and many other drugs.” 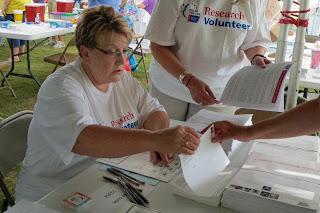 Lawry says she’ll keep taking part in Relay, not only for the future but for someone in her past. “I show my mother’s luminary to my granddaughters and think how proud she would have been of us all and if only those ground breaking treatments for leukemia would have come just a few years earlier.  I relay for my granddaughters so that if they ever get cancer there is a treatment to save their life,” says Lawry.

For Want of a Nail 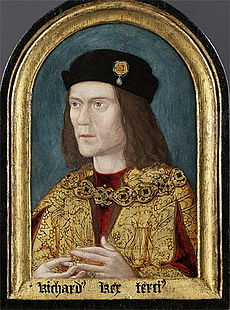 In the play the pivotal moment of the battle is shown. The morning of the battle, Richard hurriedly sent a servant to make sure his favorite horse was ready.  “Shoe him quickly,” the man told the blacksmith.  “You’ll have to wait,” the blacksmith answered.  “I’ve shoed the king’s whole army the last few days, and now I’ve got to get more iron.”  “I can’t wait,” the groom shouted impatiently.  “The king’s enemies are advancing right now, and we must meet them on the field.  Make do with what you have.”

So the blacksmith bent to his task.  From a single bar of iron he made four horseshoes.  He hammered and shaped and fitted them to the horses’ feet.  Then he began to nail them on.  But after he had fastened three shoes, he found he didn’t have enough nails for the fourth.  “I need one or two more nails,” he said, “and it will take some time to hammer them out.”  “I told you I can’t wait,” the king’s servant said impatiently.  “I hear the trumpets now.  Can’t you just use what you’ve got?”  “I can put the shoe on, but it won’t be as secure as the others.”  “Will it hold?” asked the groom.  “It should, but I can’t be certain.”  “Well, then, just nail it on. 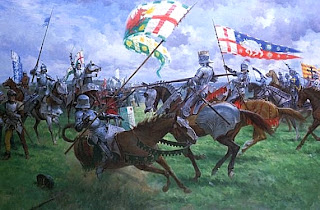 When the armies clashed, Richard was in the thick of the battle, riding up and down the field, cheering his men and fighting his foes.  In the thick of battle as he valiantly rode into the enemy lines, one of the horse’s shoes flew off.  The horse stumbled and fell, and Richard was thrown to the ground.  Before the king could grab at the reins, the frightened animal rose and galloped away, leaving Richard all by himself.  Richard looked around him.  He saw that his soldiers were turning and running, and Henry’s troops were closing around him.  He waved his sword in the air.  “A horse!” he shouted.  “My kingdom for a horse!”  But there was no horse for him.  A moment later Henry’s soldiers were upon Richard, and the battle was over. 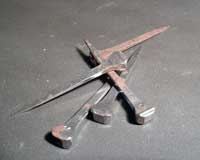 I call it the River Principle. If your life flows like a river, always passing along life and energy to those around you, then you will be pure and clean. 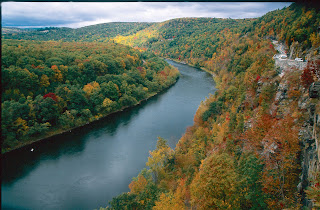 But if you’re like a pond, face it; you can only hold so much stuff.  And then, no growth takes place.  The water becomes stagnant and stinky and bad stuff grows there and mosquitoes breed. 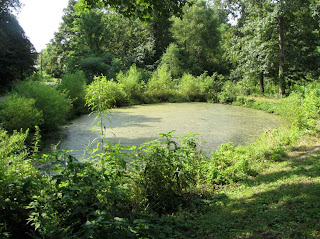 That’s why I believe Paul wrote what he did after giving us the lists of spiritual gifts in 1 Corinthians 12.  What's the next chapter after 12? 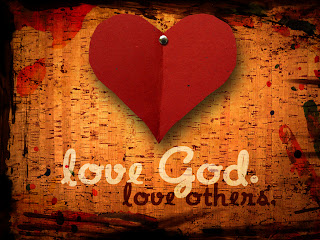 Love is the nail that holds our lives together.  It is what gives us purpose.  Whatever else we think we are accomplishing, whatever gifts we have, everything will fall apart and the battle will be lost if we don’t have love.