Today, June 15th is a special day. 37 years ago I said "I Do" to my very best friend. The best decision I ever made was to marry the girl who stole my heart when she walked into Mr Brost's History class the beginning of my senior year of high school. I know that high school romances are not supposed to be forever and that when kids get married when they are in their teens the marriages aren't supposed to last, but we have proven those things wrong. It is still awesome to go through each day with my best friend.

The rest is history. After a year of a long distance relationship, five hundred miles, we were finally in the same place at the same time. I knew that I wanted to spend the rest of my life with this girl. On June 15, 1975 we were married in the Denver First Seventh-day Adventist Church. The last 37 years have been an interesting and very fulfilling time. I'm looking forward to the next 37 years together.

Here in Arkansas June 15th is a special day for another reason. Although most Arkansans celebrate the day as our anniversary, some remember that June 15 is the birthday of Arkansas. Arkansas was declared the 25th state of the United Stated on June 15th, 1836. 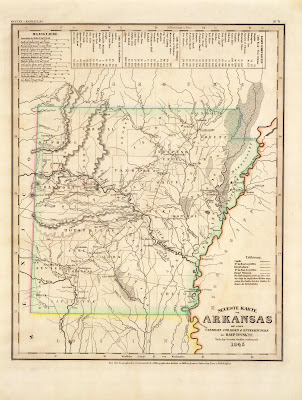 Arkansas became United States territory in 1803 when President Jefferson purchased over 800,000 square miles of land from Napoleon Bonaparte, the Emperor of France. After the Louisiana Purchase a few Americans slowly began arriving to settle Arkansas. They did not officially own the land, because the land was neither surveyed nor offered for sale until after 1815.

The survey of the Louisiana purchase was ordered by President James Monroe. It began after the end of the War of 1812, as a means for the federal government to pay its veterans with land. The nation's greatest asset was land west of the Mississippi River, and it was necessary to survey that land so that it might be apportioned fairly to veterans and sold to settlers and other investors who were already moving into the area. The official land survey began in October 1815. The survey opened up the territory to settlement. 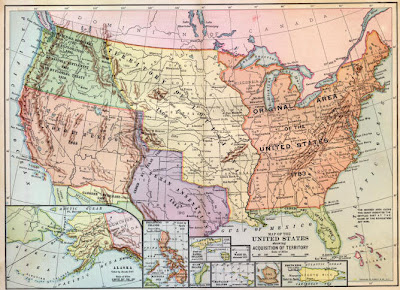 The area we now know as Arkansas was first a part of the Louisiana Territory and then of the Missouri Territory before it became a separate territory in 1819. Arkansas Post, established by the French in 1686, was the first permanent white settlement in Arkansas. When the Arkansas Territory was organized, Arkansas Post became the capital.

When the Territory of Arkansas was created in 1819, almost immediately land speculators began claiming land of the south bank of the Arkansas River that would become Little Rock. In 1821, the legislature chose Little Rock to become the territorial capital and the city was founded that same year. By the late 1820s, the city consisted of about 400 residents and 60 buildings, mostly built of logs.

The first state Capitol in Little Rock was begun by Governor John Pope in 1833. At that time nine out of ten Arkansans were farmers, growing mostly cotton and corn. The population came largely from Kentucky and Tennessee, a part of the westward movement of Scottish, Irish, and English stock from Virginia and the Carolinas since early colonial times. 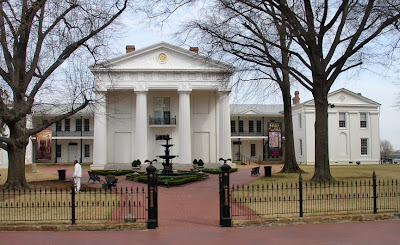 In the early 1830's the issue of statehood for Arkansas was first discussed. Part of the appeal of statehood for many citizens in the territory was that statehood would ensure that Arkansas would avoid the United States government's appropriation of public land for use as Indian reservations.

An important milestone which helped Arkansas secure statehood was the results of the 1836 census. The Arkansas territory surpassed the required minimum statehood population of forty thousand. According to the census, more than fifty-two thousand people lived in the territory, which meant Arkansas met the population requirement for being one of the new states. The Arkansas Territory was larger than the state of Arkansas. After statehood the leftover area to the west had post offices that continued for some years to use Arkansas postmarks although they were actually in territory known as Indian Country. After voting on a State Constitution, Arkansas was declared the 25th state of the United Stated on June 15th, 1836. 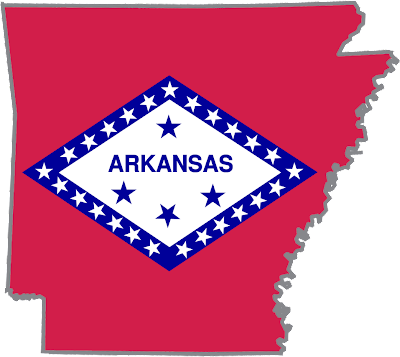 Last weekend on the spur of the moment we decided to see if there was a room available at The Lodge at Mount Magazine. Normally during this time of the year you have to have reservations well in advance, and there is a two night minimum. We were able to get the only room that was still available. We called my son and his wife and asked if they would like to go to Mount Magazine. They called back in a few minutes and said they would like to. Mount Magazine is a beautiful two hour drive from our house. Mount Magazine is the highest point in Arkansas, and The Lodge sits on the edge of the mountain with breathtaking views of the Blue Mountain Lake on the Petit Jean River. When we checked in to our room this is the view we had out of  our window.

Families began settling on Mount Magazine after the Civil War. Almost every flat area was farmed. None of the buildings are still standing, but old wagon roads and stone fences can be found in many areas.

A railroad brought many people to the Petit Jean valley around the turn of the century. Passengers were awed by the scenic beauty and spread the word about wonderfully cool Mount Magazine in Arkansas. In 1900, the railroad company decided to develop the west end into a resort town, which included streets, parks, a post office, and a hotel called the Skycrest Inn, the mountain's first hotel. All good things come to an end and this peaceful period on the mountain was no exception. Farms wore out, the stock market crashed, and people had no money for leisure. Most of the land on the mountain was turned over to the government because of unpaid taxes during the 1930s. During the depression, the WPA and the CCC government programs constructed a road across the mountain from Havana to Paris. Dams were constructed to create Cove Lake and Spring Lake. Nature trails led visitors to scenic vistas. 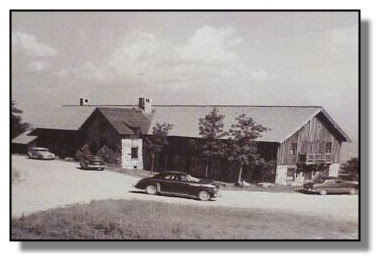 Between 1938 and 1941, the WPA built a lodge, a restaurant, an amphitheater, 18 cabins and camping and picnic areas. The Mount Magazine Lodge was a beautiful two-story building featured 26 guest rooms, a kitchen, dining room, and a stone patio with a wonderful view of the Petit Jean River Valley and the Ouachita Mountains. On either side of the lodge were 18 cabins. That lodge burned in 1971. In 1989 a Special Use Permit was issued by the U.S. Forest Service to the Arkansas Department of Parks and Tourism to allow the State of Arkansas to develop the site. In 2002 the area became the Mount Magazine State Park, and in  2006 the new lodge was opened.

That evening we drove around the Cameron Bluff Overlook Drive which has amazing views where you can see over 40 miles. It was getting close to sunset, so we stayed to watch the sun go down. The sunset was incredible.

On the way back to The Lodge I saw deer grazing on the side of the road. They didn't seemed concerned by my being there.

Once I arrived back at The Lodge, I hiked back up to Signal Hill, this time with the others. It was a beautiful morning for a hike, and that early in the morning it wasn't too hot yet.

The last thing we did on Mount Magazine before we headed home was check out the old WPA Amphitheater that was built in the late 1930's. The amphitheater, resembling something from ancient Greece, provided a unique location for sunrise services. It was something special and unique for visitors in the 40's and 50's but now there is very little left. 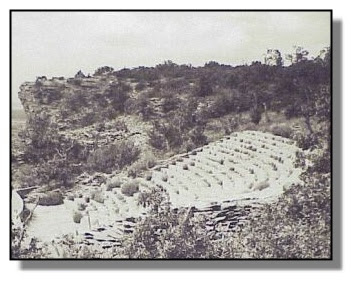 Can you imagine going back in time and being in the audience at this amphitheater with it's incredible backdrop? It must have been an amazing experience. It is kind of sad to see the condition it is in now.

We had a wonderful time on Mount Magazine, and I am so thankful that The Lodge had a room left just for us. If you ever have the opportunity to visit Mount Magazine, I highly recommend it.