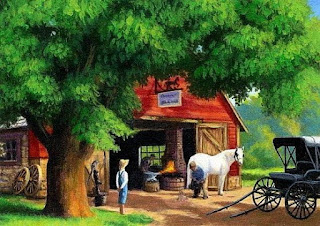 “Under a spreading chestnut tree, the village smithy stands.” I can still remember these words by Henry Wadsworth Longfellow from my high school English Literature class. I never thought about blacksmiths and their role in society and the economy until I was married. My wife’s grandfather was a blacksmith on the plains of Eastern Colorado in the early 1900s. My father-in-law would tell stories about growing up with a blacksmith for a father.

From the Middle Ages until the late 1800s, the blacksmith was considered indispensable in every town. The village blacksmith was skilled in making various tools, household objects, weapons, and repairing any metal item. As Europeans traveled across the Atlantic, blacksmiths came with them. Having a local blacksmith proved crucial in providing tools and building supplies for early settlers.

With the Industrial Revolution came the ability to produce large numbers of goods in a factory. Factory production of firearms, tools, and all types of metal parts made work hard to find for individual blacksmiths. By the end of the 19th century, most blacksmiths found themselves out of a job, and many became the initial generation of automobile mechanics. By the 1930s, the village blacksmith was a thing of the past. 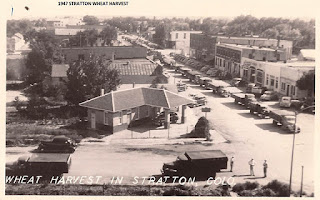 But in the early 1900s, there was still a need for a village blacksmith in small rural American communities. During this time, my wife’s grandfather was a blacksmith in Stratton, Colorado. Her Daddy would tell her stories about the blacksmith shop and her Grandpa. Because he died before she was born, my wife only knew her Grandpa through these stories.

Everyone in the small town of Stratton knew Winfield, the blacksmith. Whenever he was at work in his shop, they could hear the sound of his hammer ringing against the anvil. Longfellow put it this way. “Week in, week out, from morn till night, you can hear his bellows blow; You can hear him swing his heavy sledge. With measured beat and slow.” While recounting stories of his childhood, my wife’s Daddy, known as Red when he was a kid because of his red hair,  told her, “When the anvil quit ringing, you had better get home. It was time for supper.”

All of the local children were afraid of Red’s father, the blacksmith. He was always dirty and covered with soot from the fire in the forge at his shop. When kids came by the blacksmith shop, he would run them off. The blacksmith shop was a dangerous place for a kid, and he didn’t want them getting hurt. He could be pretty harsh with them and had a reputation for being disagreeable.

One day, Red’s buddies wanted to go to the general store and get some penny candy. “I don’t have a penny,” Red told them. “Why don’t you ask your Dad for a penny,” they answered. “I don’t ask my Dad for money,” Red replied. His buddies continued to pester him about the penny. Finally, Red decided that he would ask his Dad if he could do some work to earn a penny. When he went to the blacksmith shop, his buddies stayed on the other side of the street and wouldn’t go near Red’s Dad. When Red asked his Dad if he could work and earn a penny, his Dad asked, “what do you need a penny for?” Red replied, “I want to go get some penny candy with my buddies.” “Here is a nickel,” said Dad, “go get candy for you and your friends.” When Red crossed the street and showed his buddies the nickel, they couldn’t believe their eyes. They were afraid of this disagreeable man, but he had given Red a nickel to treat them to candy.

The story of the penny candy and the blacksmith reminds me of my relationship with God. When we look at God’s law, we sometimes see a harsh God who seems to want to restrict us. Because the blacksmith didn’t want kids to get hurt, he wouldn’t let them near his blacksmith shop. The kids perceived this as being harsh, and they feared him. Many of us look at God that way. But God, in His love for us, has given us His law as a place of peace and safety. “Those who love Your law have an abundance of peace, and nothing along their paths can cause them to stumble.” Psalms 119:165 (VOICE)

Many times we look at God’s law as a jail. We feel that it creates uncomfortable restrictions. We need to ask God to give us a love for his commandments, to instill in us a desire for the peace and safety of His law. “For this demonstrates our love for God: We keep his commandments, and his commandments are not difficult.” 1 John 5:3 (ISV) 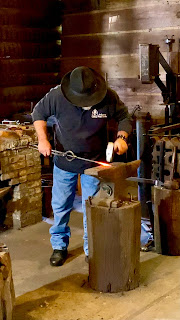 Another lesson we can learn from the blacksmith is the importance of fire. When a blacksmith is working with metal, the only way that he can shape it if he has heated it in the fire. In Isaiah 44:12 (NET), the Bible says, “a blacksmith works with his tool and forges metal over the coals. He forms it with hammers; he makes it with his strong arm.” And in Isaiah 48:10 (NIV), God says, “I have refined you, though not as silver; I have tested you in the furnace of affliction.” Have you ever felt like God was testing you in the furnace of affliction? I know I have.

Gentle Reader, I can’t say that I enjoy the heat, but I’m thankful that God is refining and shaping my life. Steel in the hand of a skilled blacksmith is malleable and not resilient. If the steel was resilient, then it would always bounce back to its original shape and be useless to anybody. I want to be useful, and the only way for a bar of steel to be transformed into something useful is to be put in the fire and shaped on the anvil. Remember that if you are being tried and shaped in the fires of life, “God is working in you to help you want to do and be able to do what pleases him.” Philippians 2:13 (NCV) Longfellow expressed this idea in the final verse of his poem. “Thanks, thanks to thee, my worthy friend, For the lesson thou hast taught! Thus at the flaming forge of life, Our fortunes must be wrought; Thus on its sounding anvil shaped Each burning deed and thought.”