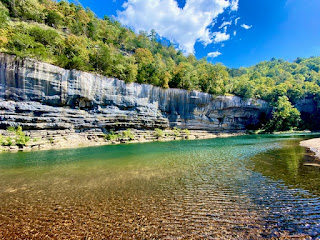 My favorite place in Arkansas is the Buffalo River area. The Buffalo River starts in the Boston Mountains and flows in an easterly direction. Along the river are multi-colored bluffs of eroded sandstone, limestone, and dolomite, with some towering to heights over 400 feet. In 1972, Congress named the Buffalo River as the country’s first national river. It is one of the few remaining free-flowing rivers in the lower forty-eight states.

The Flood Control Act of 1938 included the Buffalo River in its plans for dams on the White River. The threat of a dam on the Buffalo worried Arkansas conservation groups and those who used the river for recreation. Decades of political maneuverings, including a canoe trip on the Buffalo by Supreme Court Justice Douglas, came to a head in December 1965, when Governor Orval Faubus said he could not support a dam on the Buffalo River. Naming the River a National River put an end to the controversy. 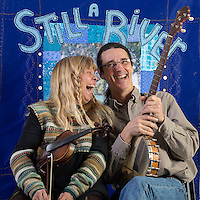 In 2017, The Buffalo River National Park Service brought Still on the Hill, an Arkansas folk duo, to the Ouachita Little Theater. I had heard them in concert once before and made plans to attend. They sang songs from their Still a River CD.  The songs told the stories of well-known landmarks along the Buffalo River, such as Bee Bluff, Sam’s Throne, Tyler Bend, Granny Henderson’s cabin, and the zinc mine at Rush Creek. I loved the music, but one part of the concert made an impression on me. Kelly Mulhollan picked up the strangest guitar I have ever seen and began telling Ed Stilley’s story. The guitar looked rough and homemade. With its butterfly shape and the words “True Faith, True Light, Have Faith in God” inscribed on the body, the guitar didn’t seem real. 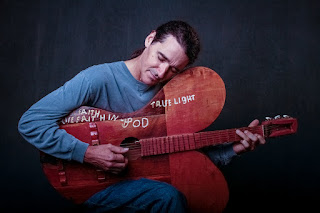 I was fascinated as Kelly told the story of his friendship with Ed. He first met Ed in 1995. His wife, Donna, was visiting friends who had been Ed’s neighbors and had received a guitar from Ed. Donna knew her folk-art-loving husband would appreciate the strange piece. “She ran home to me and said, ‘You’ve got to see this to believe it,’” He continued, “from the very start, we both felt like we had stumbled into one of the great folk artists of our time,” The Mulhollans developed a beautiful friendship with Ed, spending a lot of time with him. As he strummed a few chords on the strange guitar,  Kelly said, “Ed gave me this wonderful instrument in 2004. It was among the last instruments he built. Its proportions are undeniably dramatic, and it’s a fine-sounding instrument as well. I have been using it for years in live performances.”

Ed’s story is remarkable. The Still on the Hill website tells it this way. In 1979, he led a simple life as a farmer and singer of religious hymns in Hogscald Hollow, a tiny Ozark community south of Eureka Springs, Arkansas. Life was filled with hard work and making do for Ed, his wife Eliza, and their five children, who lived simply, as if the second half of the twentieth century had never happened.

But one day, Ed’s life was permanently altered. While plowing his field, he became convinced he was having a heart attack. Ed stopped his work and lay down on the ground. Staring at the sky, he saw himself as a large tortoise struggling to swim across a river. On his back were five small tortoises—his children—clinging to him for survival. And then, as he lay there in the freshly plowed dirt, Ed received a vision from God, telling him that he would be restored to health if he would agree to do one thing: make musical instruments and give them to children. 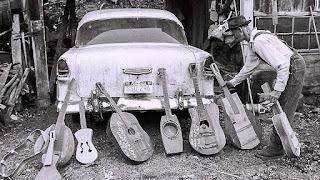 And so he did. Beginning with a few simple hand tools, Ed worked tirelessly for twenty-five years to create over two hundred instruments, each a crazy quilt of heavy, rough-sawn wood scraps joined with found objects. A rusty door hinge, a steak bone, a stack of dimes, springs, saw blades, pot lids, metal pipes, glass bottles, aerosol cans—Ed used anything he could to build a working guitar, fiddle, or dulcimer. On each instrument, Ed inscribed, “True Faith, True Light, Have Faith in God.”

As a craftsman using only basic woodworking tools, a fertile imagination, and materials available to him from the forests of the Ozark Mountains, Ed Stilley made hundreds of guitars that he gave away to neighbors and children. 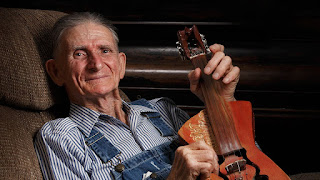 When an interviewer asked Ed why he never signed his guitars, he replied, “because I done it for the glory of God. I never done it in my name. I wasn’t smart enough to make ’em and I shore wasn’t gonna put my name on ’em. I had some people try to get me to and I said you just get yourself a piece of paper and put my name on that. I said, “I’m gonna tell you why.” I said, “Now whenever God tells you to do something, He wants you to do it exactly like He gave the order.”

The calling that Ed felt reminds me of a verse found in 1 Corinthians 7:17 (NIV) “Nevertheless, each person should live as a believer in whatever situation the Lord has assigned to them, just as God has called them.” And the Apostle Peter tells us, “Each of you should use whatever gift you have received to serve others, as faithful stewards of God’s grace in its various forms.” 1 Peter 4:10 (NIV)

Gentle Reader, sometimes we may feel that God calls only pastors. In Christian circles, the word “calling” feels like a name saved only for special people and those paid to do ministry. But God calls every one of us. Jesus says, “Come to me, all of you who are weary and carry heavy burdens, and I will give you rest.” Matthew 11:28 (NLT) Our first calling is to be near Jesus. When we are, everything else begins to fall into place. What is God calling you to do today? It may not be building handmade guitars, but He has a calling for you. Ask Him what he wants you to do.