I was honored to be asked to officiate my niece Stacey's wedding. I love Luke and Stacey. They have such a zest for life. This is their story as I told it during the wedding ceremony. 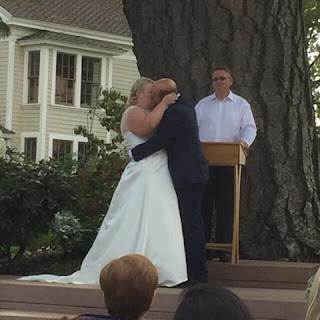 Once upon a time in a land not so very far away lived a girl with beautiful golden hair. One day a friend of the golden-haired girl suggested a date with the prince of the great land to the north. Although the golden-haired girl wasn’t really looking for a prince, she agreed to a group date. The prince thought a visit to a land not so far away might be nice, but when a mutual friend said the girl with the golden hair would be perfect for the prince, he saw warning flags waving.

The prince arrived fashionably late to the group date at Kennedy School. The golden-haired girl along with some mutual friends socialized late into the night. As the evening was coming to a close, the prince, knowing that he had a long ride home, excused himself to visit the chamber pot. When he returned, he asked, “where did the golden haired girl go?” She had gone without saying goodbye. The prince felt bad that the golden-haired girl had treated him this way.

The very next day, the prince used his alphanumeric communication device to convey his thoughts to the golden-haired girl. The prince suggested a one on one brunch date and the golden haired girl agreed. The prince was gallant and a complete gentleman. It had been a long time since the golden-haired girl had been on a date. She thought about all of the topics of conversation that she should avoid. She wanted to be on her best behavior, but she was so nervous that those topics were all she could think of to talk about.

Although the prince procured the finest brunch in the land at the cost of 47 pieces of silver, the golden haired girl failed to say thank you. The prince valued politeness, and her failure to even say thank you lowered his opinion of her. The golden-haired girl became known as “no thank you girl” to the prince’s friends and family.

Neither the prince or the golden-haired girl felt that there was a future for them. Neither one of them planned on seeing the other one again. But the Creator had different plans. He saw something that neither of them had seen. Their story wasn’t finished; it was only beginning.

Here is where the story takes a magical twist. Somehow one of the messages sent by the prince’s alphanumeric communication device the night before his date with “no thank you girl” got lost for a couple of days in the series of tubes that make up the interwebs. After it had seemed like there was no hope for romance between the prince of the great land to the north and the girl with beautiful golden hair, the Creator directed the lost message to the golden-haired girl’s alphanumeric communication device.

She was puzzled by the message because she felt that she would never hear from the prince again. She felt that the proper protocol would be to reply to the prince using her alphanumeric communication device.

When the prince received her message he thought it was a bit strange but he felt that the polite thing to do would be to answer. Messages were sent back and forth, but the prince was not regular or consistent with his messages. The golden-haired girl began to refer to him as “radio silence guy” to her friends and family.

We are all gathered here today because of the story of “Radio Silence Guy” and “No Thank You Girl.” After a “lukewarm” face to face meeting in the great land to the north. (Sorry about the pun, I couldn’t help myself). And what seemed like another false start, “No Thank You Girl” was finally able to get “Radio Silence Guy” to communicate with her by voice transmission devices.  Once they started communicating in this way, they found that they were connecting and that they enjoyed this form of communication.

There were weeks that “No Thank You Girl” would spend more time communicating with “Radio Silence Guy” by voice transmission device than she spent sleeping. She began to realize that the prince might not have been her prince in shining armor – although when the sun was directly overhead, there was a certain glint of the top of his head – she was feeling something. Was it love? It hadn’t been love at first sight, but there was something about this “Radio Silence Guy.”

The prince of the great land to the north wondered why it had taken him so long to realize that “No Thank You Girl” was the fairest of all the young maidens in the realm. He discerned that the words of the Creator were true where it was written in the Scroll of Ecclesiastes chapter four, “Two are better than one, Because they have a good reward for their labor. For If they fall, one will lift up his companion. But woe to him who is alone when he falls, For he has no one to help him up.”

And he continued to read the scroll, “If two lie down together, they will keep warm; But how can one be warm alone?"

As he pondered these things, he crafted a plan.  He asked the girl with the beautiful golden hair to accompany him to a tropical island paradise that lay far across the Western Sea. While they were enjoying the enchantment of the island, “Radio Silence Guy” asked “No Thank You Girl” if she would marry him.

Since they are standing in front of you today, I think you know what her answer was.

Luke and Stacey, I am not here today to give you marriage advice, but I thought it would be OK to mention some advice from the poet Ogden Nash.

I want to leave you with one more nugget of wisdom from Ecclesiastes 4, “Though one may be overpowered by another, two can withstand him.”  The beauty of marriage is that you can look to each other for support and encouragement. You can strengthen and sustain each other. You can uphold and defend each other.

Don’t ever forget or neglect your friendship with each other. Continue to share in each other's lives. Spend time talking to and with each other. You are no longer “No Thank You Girl” and “Radio Silence Guy.” You are the awesome and formidable team of Luke and Stacey. I can’t wait for new chapters in your story. 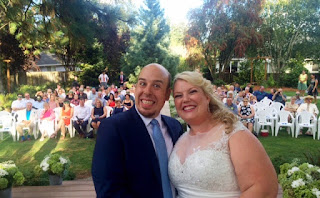