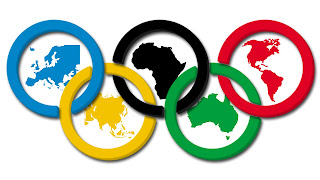 I have always enjoyed watching the Olympics. I have passed on my Olympic passion to my daughter. When she was five years old, her hero was Olympic hurdles gold medalist, Edwin Moses. She would set things up in the hallway and practice jumping over them. 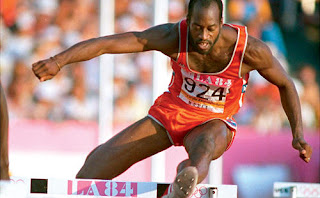 This year is the first time that I haven’t been spending every evening watching the Olympics. Earlier this year we made the decision to do away with our satellite television. I’m still interested in the Olympics, but now I keep up with it by reading articles on the internet. Michael Phelps, Katie Ledecky, Simone Biles, and Usain Bolt are top performers in these games, and there have been lots of articles about their medal winning performances. 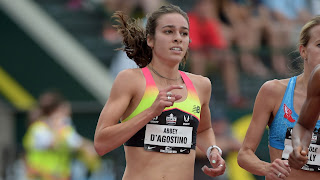 As I was reading Olympic news, a story grabbed my attention. It didn’t involve any well-known names. It wasn’t about an American medal winner. It was a story about lending a helping hand.

During a qualifying heat of the women’s 5,000 meters, Abbey D'Agostino, a 24-year-old from Topsfield, Massachusetts, was involved in a chain-reaction wreck with New Zealand's Nikki Hamblin, and they both went down with about 2,000 meters to go. Hamblin fell on her right shoulder. D’Agostino got up, but instead of running in pursuit of the others, D’Agostino leaned down and put her hand on the New Zealander’s shoulder. Hamblin was just lying there. She appeared to be crying. D’Agostino helped her up and urged her not to quit. Hamblin said, “Yup, yup, you’re right. This is the Olympics Games. We have to finish this.” 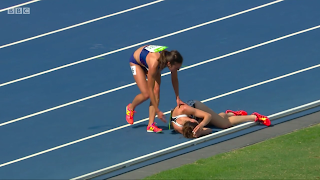 As they started to run again, D’Agostino soon realized she’d hurt her ankle in the fall. Even though she was in a lot of pain, she refused to give up, running nearly half the race with the injury. Hamblin did what she could, hanging back with D’Agostino for a while to offer encouragement. “She helped me first. I tried to help her. She was pretty bad,” Hamblin said. She eventually had to leave D’Agostino behind and was certain that the American would have to stop. But she didn’t.

“I didn’t even realize she was still running. When I turned around at the finish line and she’s still running, I was like, wow,” Hamblin said. She waited for D’Agostino to cross the line and they hugged. This time, it was D’Agostino who was in tears. As she was about to be taken away in a wheelchair, D’Agostino offered her right hand to Hamblin, and the two runners gripped each other’s forearms for a few moments. 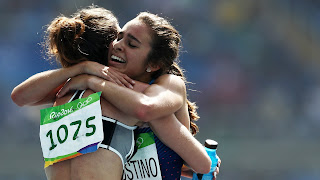 In an Olympics that has seen a number of unsportsmanlike incidents, Hamblin and D’Agostino provided a memory that captured the Olympic spirit. “I’m never going to forget that moment,” Hamblin said. “When someone asks me what happened in Rio in 20 years’ time, that’s my story ... That girl, shaking my shoulder, saying ‘come on, get up.'” Abbey D'Agostino was quoted saying, "Although my actions were instinctual at that moment, the only way I can and have rationalized it is that God prepared my heart to respond that way. This whole time here, He's made clear to me that my experience in Rio was going to be about more than my race performance — and as soon as Nikki got up, I knew that was it." 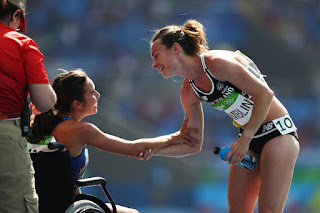 Abbey D'Agostino can say with the apostle Paul, “I have fought the good fight, I have finished the race, I have kept the faith.” 2 Timothy 4:7 (NKJV)

Paul wrote to the Corinthians explaining the role that Christians should have when those around them have trouble. “He comforts us every time we have trouble, so when others have trouble, we can comfort them with the same comfort God gives us.” 2 Corinthians 1:4 (NCV) When people that you know have trouble, are you a comfort to them? Or are you too busy worrying about your own plans? 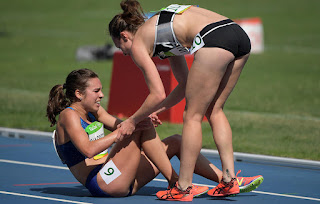 “Put yourself aside, and help others get ahead. Don’t be obsessed with getting your own advantage. Forget yourselves long enough to lend a helping hand.”  Philippians 2:4 (MSG)

Gentle Reader, look to the example of Abbey D'Agostino who instead of focusing on herself, first gave a helping hand to another. There is happiness in serving God through serving others.