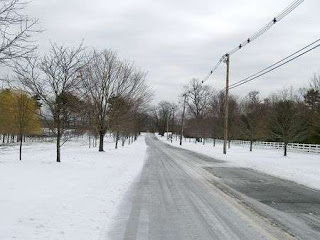 The cold Kansas winter wind blew as the young boy walked down the icy country road. The gravel road was coated in sleet and ice. “Be careful, Bobby,” Daddy said, “you don’t want to slip and fall like I just did.” “Yes, Daddy,” Bobby answered. They had already been walking for more than a mile, and still had several more to go. Bobby had never seen a road that was so slick. The day before, there had been several inches of sleet, followed by heavy freezing rain. The ice coated everything making it impossible to travel the country roads by car.

Earlier that morning, Daddy had said, “Bobby, why don’t you come with me to take care of the neighbor’s cattle.” Daddy had promised the neighbor that he would feed the cattle while the neighbor had to be out of town for a few days. He hadn’t gone to feed the cattle the day before because of the ice storm, and he knew that the cows would be hungry. “We can’t take the Model A, it’s frozen solid, and the roads are too slick,” Daddy said, “we will have to walk.” “But the neighbor's house is five miles from here,” Bobby said. “Yes,” Daddy answered, “but I promised that I would take care of the cattle so if the only way that we can get there is by walking, then we will have to walk.” 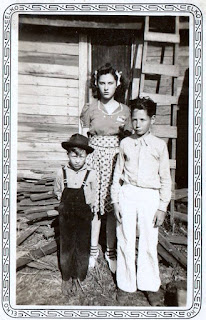 Along the country road on the way to the neighbors’ house, there were several long steep grades. Daddy and Bobby struggled to make it up the slippery slopes, and Daddy fell multiple times. “How long will it take us to get there,” Bobby asked. “However long it takes,” Daddy answered, “I promised that I would take care of the cattle and I must keep my word no matter how bad the conditions are or how long it takes.” Bobby put his hands in his pockets to warm them up as they continued walking down the icy road.

After walking for three and a half miles, Daddy and Bobby came to the state highway. As they were walking down the highway, a truck came by spreading sand on the road. The driver stopped and asked where they were going. Daddy told him that they were heading to the neighbor’s house about a mile and a half on down the highway. “Hop in and get warmed up,” the driver said, “ride with me while I’m sanding the road and I will take you there.” Bobby was happy to crawl up into the cab of the truck and sit between the driver and Daddy.

When they reached the neighbor’s house, the truck stopped, and Daddy and Bobby crawled down out of the truck. “Thank you so much,” Daddy told the driver as they waved goodbye. Bobby gave grain to the cattle and Daddy pitched hay. The cows were very happy to see them and get something to eat. When they had finished feeding the cows, Daddy chopped a hole in the ice so the cattle could get a drink. When they had finished, Daddy said, “we had better get started back home. We have a long way to go, and we want to get home before dark.” 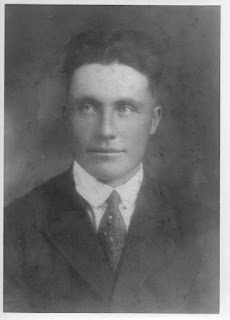 Shortly after they started walking down the highway, someone gave them a ride to the country road that led to their house. They still had three and a half miles to walk. As they made their way down the icy road, Daddy slipped and fell several more times. When they could finally see the home place, it was almost dark. They had walked miles and miles of treacherously slick roads to feed some cows. “Why did we have to go feed the cows when the roads were so icy?” Bobby wondered.  “A man’s word is important,” Daddy answered. “If you make someone a promise, you should do everything in your power to keep it.” When they opened the door to their house and felt the warmth of the wood stove, Bobby was happy to be home. He hoped that Daddy wouldn’t be too sore from all the times that he slipped and fell on the icy road.

The Daddy that felt that his promise to a neighbor was so important that he was willing to walk ten miles on slick, icy roads on a cold winter’s day was my Grandpa and Bobby was my Daddy. Daddy learned by example from an early age that a man’s word is his bond, and that the promises we make are important. As much as I would like to be able to say that because of the example of my Grandpa and my Daddy, I have always kept my promises; that isn’t the case. I have made promises that I didn’t keep. But God expects us to keep our promises. “If a man makes a promise to the Lord or says he will do something special, he must keep his promise. He must do what he said.” Numbers 30:2 (NCV) 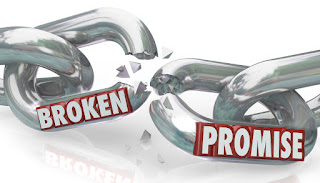 Gentle Reader, I have had many promises made to me that were broken. I’m sure that you have too. And just like you, I have broken promises that I have made. But unlike the promises we make to each other, God keeps every promise he makes to us. God does not go back on His word. “God is not a human being, and he will not lie. He is not a human, and he does not change his mind. What he says he will do, he does. What he promises, he makes come true.” Numbers 23:19 (NCV) When you read your Bible, look for the promises God makes to you. A favorite promise of mine is found in Isaiah 41:10 (NLT) “Don’t be afraid, for I am with you. Don’t be discouraged, for I am your God. I will strengthen you and help you. I will hold you up with my victorious right hand.” It is a promise you can count on!

Posted by Richard Lawry at 1:30 AM