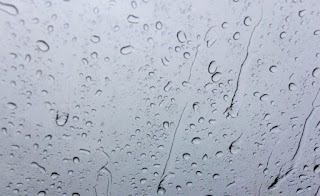 Softly splashing raindrops hit the windshield as I drove out of town early in the morning. The skies were overcast, and a blanket of grey shrouded the landscape. I watched the raindrops trickle down the side windows as the wipers kept the windshield clear. The drops were steady but soft, and I hoped that it wouldn’t begin to rain harder. I don’t like to drive in heavy rain, especially on the crooked, winding roads of Western Arkansas.

I was heading to Mountain Pine to pick up my eleven-year-old granddaughter. She had spent the week at summer camp. Campers from the week had to be picked up early so that a new group of campers could be dropped off to spend a week at camp. After an hour or so, the rain became intermittent, and there was a hint of blue skies trying to break through the grey clouds. By the time I reached Camp Yorktown Bay on the shore of Lake Ouachita, the rain had stopped, and it was a beautiful partly cloudy summer day. 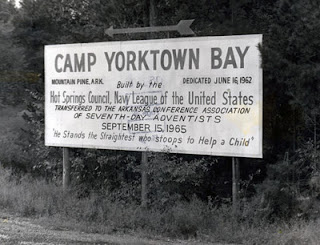 Camp Yorktown Bay was built by the Hot Springs Navy League Council in 1960. The idea for a camp started when the League wanted a training base for its sea cadets along the shores of Lake Ouachita. Camp Yorktown Bay was named in recognition the Aircraft Carrier, U.S.S. Yorktown. The camp is now operated by the Arkansas-Louisiana Conference of the Seventh-day Adventist Church. 700 to 800 kids attend each summer.

When I arrived at the camp, I checked in with security and stepped into the cafeteria to find my granddaughter. At first, as I glanced around the room filled with campers and their luggage, I didn’t spot my granddaughter, but then I saw her running towards me with her arms open wide. She gave me a huge hug and immediately started talking ninety miles an hour. She wanted to introduce me to the girls who had been in her cabin. They all had to say their goodbyes and then wanted me to take a photo of the group. 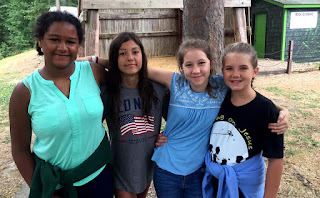 We loaded her things into the car and then started the two-hour drive home. As we drove, my granddaughter chattered away, telling me all the things that she had done at camp such as swimming, boating, riding horses, climbing the rock wall, and many other things. She told me stories of things that happened in her cabin. She told me about the evening campfire programs with skits, singing, and storytelling. She thought the skits were hilarious, and she liked the speaker. She sang songs that she had learned at camp even though it was hard to make the hand motions in the car. She talked non-stop about her camp experience. There was no doubt that she had a good time at summer camp. After an hour or so, she started to slow down, and before I knew it, she had fallen asleep.

I was so pleased that my granddaughter had such a good time at camp. After listening to her chatter, there was no doubt that she loved summer camp. It made me think about how Christians talk about God and spirituality. More than 70 percent of Americans identify as Christian, but you wouldn’t know it by listening to them. An overwhelming majority of people say that they don’t feel comfortable speaking about faith. Those who do feel comfortable speaking about their faith often focus on the things that they don’t like, and how much they dislike those who have different religious or political beliefs.

The Barna Group, a social research firm focused on religion and public life, surveyed 1,000 American adults. This study revealed that more than 75% of Americans do not often have spiritual or religious conversations. A mere 7 percent of Americans say they talk about spiritual matters regularly. Many people now avoid religious and spiritual language because they don’t like the way it has been used, misused, and abused by others.

If being a Christian is so great, and I think that it is, why don’t more Christians talk about how great it is? If we are having a wonderful time, we should be like my granddaughter who had so much to say about how much she liked summer camp. 1 Peter 3:15 (NIV) says, “in your hearts revere Christ as Lord. Always be prepared to give an answer to everyone who asks you to give the reason for the hope that you have. But do this with gentleness and respect.” Often the Christians that I do hear talking about spiritual matters are not doing it with gentleness and respect.

I recently read a story about a waitress and her encounter with a group of Christian women. The waitress hears the table of women she is serving speaking excitedly of another person. They seem to be genuinely enthusiastic. Curious, she listens more closely and finds out that these women are talking about Jesus. 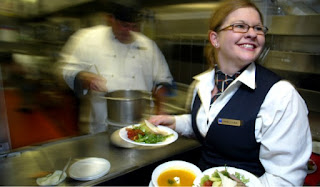 The waitress can see that the women seem very nice, and enjoy each other’s company. But when she takes their orders, they are cold and superficial toward her. When she returns with their food, she hears them talking about how amazing the church service was and how good God has been to them. But as she serves them, they are harsh and complaining.

The women leave the table, barely acknowledging the waitress. As she starts cleaning up, she finds a gospel tract on the table with a single dollar bill. The tract is cleared away with the rest of the trash and thrown away. She quietly picks up the dollar bill and slips it into her pocket. The waitress now has a negative impression of Jesus and the people who claim to worship him.

Gentle Reader, what kind of witness are you? Are you one of the many Christians who never talk about spiritual things? Or are you one of the Christians who says all the right things about God, but who treats others with indifference? Maybe you are one who speaks words of hatred towards people of other religions or people who are non-religious. I hope you are a Christian who can’t help telling others about how great it is to be a Christian and how much you love it; Like my granddaughter talked about summer camp. We need to be like Peter and John, who said, “we cannot stop telling about everything we have seen and heard.” Acts 4:20 (NLT)