Angels on the Ouachita 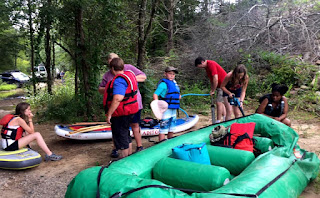 The house was with a flurry of activity as kids and adults prepared for a day on the river. We were excited because the Ouachita River levels were perfect for floating a raft. Seven adults, four kids, food, drinks, a rubber raft, and three paddle boards including the Megalodon multi-person paddle board loaded into the vehicles and we were ready to head out. It had been raining off and on, but our spirits were high as we headed to the Ouachita River.

By the time that we reached the Pine Ridge access and started unloading, the rain had stopped. While others were blowing up the rafts and paddleboards, a couple of us ran the shuttle to drop off a vehicle at the Shirley Creek access, six miles downstream. When everything was ready, we pushed off into the water and started downstream. The river was gently winding its way between the banks with lush green trees whose roots have been exposed by high water earlier in the year. 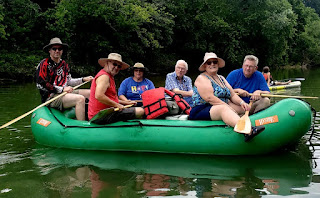 It was a perfect summer day; not too hot, and the early morning rains were gone. There was blue sky and sunshine with enough cloud cover to make it comfortable. The river was peaceful and serene as we floated past amazing rock formations and the occasional home. The kids were having a great time jumping off the Megalodon paddle board, swimming in the river for a while then climbing back on the board. Shrieks and laughter filled the air as we made our way downstream.

After an hour or two, we found a gravel bar and beached our raft. We pulled the coolers out of the raft and had a lunch of sandwiches, chips, fruit, and cookies. It is amazing how hungry you can get paddling on a river. Just upstream from the gravel bar was a large rock outcropping. The water at the base of the rock was quite deep, and the kids, along with my son-in-law, had a great time jumping off the rock into the water. The kids were having a good time swimming and jumping and didn’t want to leave, but it was time to get back on the river. 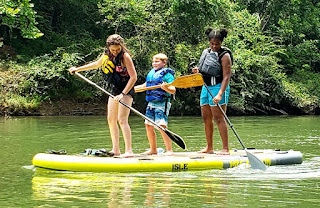 While we were on the river, we pulled the paddle boards around the raft and stopped in the middle of the river for a devotional. We talked about Naaman and the Jordan River. Naaman left Syria and came to Israel looking for Elisha. His servant girl had told him that Elisha could heal him of his leprosy. When he knocked on Elisha’s door, “Elisha sent Naaman a messenger who said, ‘Go and wash in the Jordan River seven times. Then your skin will be healed, and you will be clean.’” 2 Kings 5:10 (NCV) But Naaman wasn’t impressed. He said, “‘the rivers of Damascus, are better than all the waters of Israel. Why can’t I wash in them and become clean?’ So Naaman went away very angry.” 2 Kings 5:12 (NCV)

Naaman’s servants spoke sensibly to him, helping him to see that what Elisha asked was not that difficult. He went to the Jordan River, dipped seven times, and was healed. Why was he healed? It was not because of the Jordan River. It was not because he dipped seven times. It was because God told Naaman, through His prophet Elisha, that if he obeyed he would be healed. God healed Naaman because he obeyed. God wants to heal all of us, but he asks that we obey Him. Obedience doesn’t save us; God saves us. But He asks that we obey Him as a sign that we trust Him.

We continued down the river until we reached the Shirley Creek takeout. When we had pulled our raft and paddle boards up the steep muddy stairs to the picnic area where our shuttle vehicle was parked, we realized that the keys to the vehicle were back at the Pine Ridge drop off point. What would we do? We had a group of tired people who had just spent the day floating six miles on the river, and they were ready to go home. But we were miles away from the keys that we needed. Walking would take several hours. Just as we realized our dilemma, a vehicle drove into the picnic area. Two guys were scouting out the river for a float trip. They were asking some of our group questions, so they sent my son-in-law to talk with them. He is very knowledgeable and has floated many rivers, including the Ouachita several times. He told the guys about our predicament and asked if they would take us back to Pine Ridge. They agreed to take us. 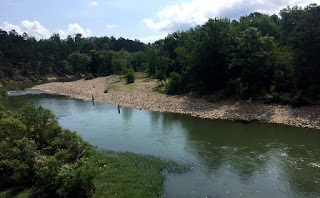 My son-in-law and I rode back with them to pick up the two vehicles that we had left at Pine Ridge. As we drove along, we talked about our river floating experiences. When they dropped us off at our vehicles, I told the guys, “I have always wanted to know what angels looked like, but you really surprised me.” The laughed, and said that no one had ever called them angels before. But if they weren’t angels, I still think that they were sent by God. We could have been at the picnic area for hours without seeing anyone.

When we had returned with the other vehicles, I was reminded of the fact that. “your Father knows exactly what you need even before you ask him!” Matthew 6:8 (NLT) It made me think of my heavenly Father in such a loving and caring way. In the middle of taking care of the universe, God saw fit to remind me that just because I didn’t yet know how He was at work in my situation, didn’t mean He didn’t know exactly what was happening. He provided the answer to my problem even before I knew I had a problem.

Gentle Reader, God knew what I needed even before I asked. He provided a way out of my predicament. He sent angels on the Ouachita. He will do the same for you. Just because God provided two guys to give me a ride when I needed it doesn’t mean they weren’t actually angels. “Don’t forget to show hospitality to strangers, for some who have done this have entertained angels without realizing it!” Hebrews 13:2 (NLT)

Posted by Richard Lawry at 7:10 AM