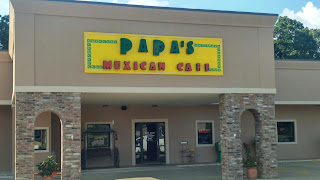 Black clouds began to sprawl across the sky as we sat at Papa’s Mexican Café. It was our weekly family night, and we were having a wonderful meal at Papas. The kids wanted to sit at their own table separate from the adults. They were making up storylines for their very own superhero movie. From the adult's table, we could see out the front door. As the clouds rolled in and we began to hear thunder, we thought that we should cut the evening short. On our family nights, we usually sit and visit for quite some time after we have eaten. But tonight, we decided that it would be a good idea to get home before the storm hit. My Daddy had driven his Shay Model A Roadster, and with no side windows, it would be good to get home before it began to rain.

As we walked to our cars, we could see dark, brooding, black clouds to the southwest. The skies looked ominous. We made it home before the storm hit. As we sat in the comfort of our living room, we could see the boughs of the trees in the back-yard swaying in the strengthening gusts of wind. The rain started with just a few drops; then the dark clouds unleashed a torrent of water, driven by the strong wind. The sky turned a strange color, and the thunder rolled as lightning flashed all around. I checked the radar on my phone and saw that there were serious storms to the south of us.

While the rain fell in great sheets, lightning flashed around us followed by loud cracking booms. We were concerned about how severe the storm would be. Some small, pea-sized hail beat on the windows. When I checked the weather radar on my phone, I saw that there were very severe storms a few miles south. Reports started coming in on social media, showing very large hail south of us. 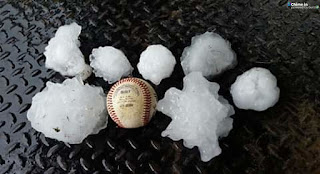 Baseball-sized and even softball-sized hail fell in the Cove, Vandervoort, and Wickes area. We wondered if the hailstorms were heading our way. Before long, the storm in our area weakened, and the winds died down. The rain slackened and began floating down in gentle waves.

Later that evening when I saw the photos on social media that several residents in the towns of Cove and Vandervoort posted of hailstones ranging from the size of a tennis ball to larger than softball-size, I knew that there would be a lot of damage. I was sure that the hail had damaged many cars and trucks. Sure enough, the next morning, as soon as I opened my auto glass shop, the phone started ringing off the hook. Many people in the area had their glass broken by the hail. I was busy all day pricing, scheduling, and ordering glass.

What could have caused such large hailstones? Hail forms when thunderstorm updrafts are strong enough to carry water droplets well above the freezing level. This freezing process forms a hailstone, which can grow as additional water freezes onto it. Eventually, the hailstone becomes too heavy for the updrafts to support it, and it falls to the ground. The hailstones grow larger as they move up and down in the thunderstorm updraft.  Eventually either the hailstones get too large and fall to the ground or get blown out of the updraft. For hail to get the size of a baseball, you need the updraft in the thunderstorm to be moving more than 100 mph! I can’t imagine what the speeds were to form softball and even grapefruit-sized hailstones. 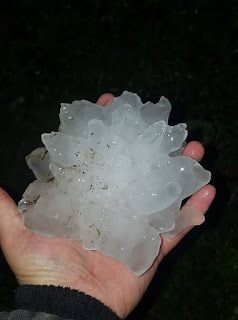 According to Weather Underground historian Chris Burt, the world's largest hailstone by diameter and weight was observed in the U.S. on July 23, 2010, near Vivian, South Dakota. The hailstone measured 8.0 inches in diameter, and it weighed 1.9 pounds. The National Weather Service has confirmed the hail which fell during the evening of June 19 in the Vandervoort community in south Polk County tied for an Arkansas record of approximately five inches. By comparison, a softball is 3.5 inches in diameter. The largest hailstones in this storm were the size of large grapefruit. There were reports of a calf that was killed by the hail.

As large as the Vandervoort hailstones were, the Bible tells of much larger hailstones that will fall in the future at the very end of time. “Huge hailstones weighing about 100 pounds each fell from the sky. The hail crushed people. And they spoke evil things against God because of the plague. That’s because the plague of hail was so terrible.” Revelation 16:21 (NIRV) After seeing some of the damage that was caused by this storm, I can’t imagine the damage that 100-pound hailstones would do. The hailstones at the end of time are not the only hailstones mentioned in the Bible. In Joshua chapter 10, we find the story of the day that the sun stood still when Joshua and the Israelites were in battle with the Amorites. Did you know that a hailstorm was a pivotal point in the battle? “As the Amorites retreated down the road from Beth-horon, the Lord destroyed them with a terrible hailstorm from heaven that continued until they reached Azekah. The hail killed more of the enemy than the Israelites killed with the sword.” Joshua 10:11 (NLT)

Hailstorms can be deadly. Forty years ago, when we were living in Loveland, Colorado, a hailstorm damaged our new Toyota Corolla and broke out the windshield and the back glass. The hail punched holes in our neighbor’s camper. Hail damaged the roof of our home and had to be replaced. In that same storm, a baby died when a grapefruit-sized hailstone came crashing through a skylight in a shopping mall.

Gentle Reader, when 100-pound hailstones are falling at the end of time, I want to be among the people who say, “this is our God; We have waited for Him, and He will save us. This is the Lord; We have waited for Him; We will be glad and rejoice in His salvation.” Isaiah 25:9 (NKJV) I don’t want to be among those who see the hail and say to the mountains and rocks, “fall on us and hide us from the face of Him who sits on the throne and from the wrath of the Lamb!” Revelation 6:16 (NKJV) I look forward to the day that “God Himself will be with them and be their God. And God will wipe away every tear from their eyes; there shall be no more death, nor sorrow, nor crying. There shall be no more pain, for the former things have passed away.” Revelation 21:3,4 (NKJV) I hope that you are looking forward to that day too.