My An Arkie's Faith column from the September 15, 2021, issue of The Polk County Pulse. 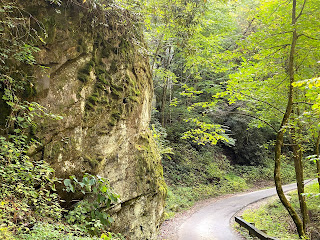 After a long day of driving across Arkansas and Tennessee, Daddy and I were rewarded with the beautiful scenery of the Great Smoky Mountains National Park. To avoid the heavy traffic in Sevierville and Pigeon Forge, we took the scenic route into Gatlinburg. We were traveling on the Little River Road, a gorgeous winding road meandering alongside Little River. It had been many years since I had visited the Smoky Mountains, and I was excited to be there.

We traveled to Gatlinburg, Tennessee, to attend a weekend seminar hosted by the It Is Written television program. It Is Written has been a staple on American television since premiering in 1956. The weekly program, currently hosted by John Bradshaw, applies timeless truths to everyday life, with many episodes dealing with loneliness, fear, low self-esteem, and spiritual principles. Daddy is a longtime supporter of the ministry and has attended many seminars in the past. Earlier this year, he asked me to take him to the seminar, and I agreed. 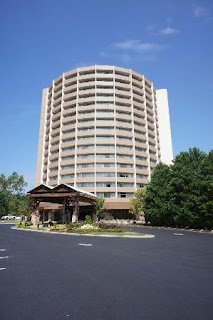 The seminar was at the Park Vista hotel in Gatlinburg. It is set 1,000 ft. above Gatlinburg, and with fourteen floors, the hotel has sweeping views over the city and Smoky Mountains. The hotel is a circular building, and every room has an outside view and balcony. Our room was on the side of the hotel that faced the mountains, and our view was spectacular.

After attending the morning seminar and eating lunch, Daddy and I headed back into the Great Smoky Mountains National Park to explore. We drove a couple of miles from the hotel to the Roaring Fork Motor Nature Trail. The road twists and turns for six miles in a one-way loop that ends up back in Gatlinburg. We stopped a couple of times to enjoy the beauty of the Roaring Fork River. It was a perfect day with moderate temperatures and sunny skies.

One of the stops that we made was at the Ephraim Bales Place. The main feature on the site is the original “dog-trot” cabin; two cabins placed side by side with space between them and a common roof connecting them. The larger cabin was the living area, while the other was the kitchen. The open area served as a covered walkway between the two cabins, a sitting area during warm or stormy weather, and a passageway for air to flow through to help keep the place cool in the summer. 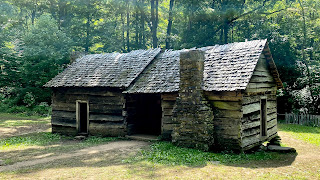 The cabin remains as it was when the Bales family lived here in the early 1900s. Ephraim, his wife, Minerva, and their nine children called this small cabin home. It is hard to imagine eleven people crammed into this tiny home, but they managed. The family lived here from around 1890 until the government purchased the land in 1930 for inclusion in Great Smoky Mountains National Park. The original corn crib, barn, and pig pen remain standing as well.

As I walked around the cabin site, I tried to imagine the life of this mountain family. I thought about what it was like growing up here as one of Ephraim and Minerva Bales’ nine children. I tried to visualize what it was like to live in this tiny cabin with ten other people. Ephraim Bales owned 72 acres here. He farmed thirty acres, while the rest remained wooded. Ephraim’s farm was one of many along the Roaring Fork, where families scratched a hard living from a very rocky land.

I wondered why someone would want to live here. It’s not like today, where you can buy a mountain cabin and get everything you need at the store. These people had to get everything they needed out of the land. The valley of the Roaring Fork, where the Ephraim Bales cabin is located, is an extremely narrow, rock-strewn hollow. Rock is more common than soil. The small fields where Ephraim and his family once planted corn remind us of these mountain people’s difficult lives and how hard they worked. Some abandoned fields’ slope is so steep that it is difficult to believe that anyone farmed them. There is an old mountain saying, “oft times a handful of soil was placed between the rocks so the corn could be planted.” 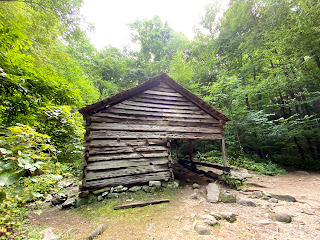 As I thought about the back-breaking work of growing crops on these rocky mountainside fields, I remembered a parable that Jesus taught. “He said: ‘A farmer went out to plant his seed. While he was planting, some seed fell by the road. The birds came and ate all that seed. Some seed fell on rocky ground, where there wasn’t enough dirt. That seed grew very fast, because the ground was not deep. But when the sun rose, the plants dried up because they did not have deep roots. Some other seed fell among thorny weeds. The weeds grew and choked the good plants. Some other seed fell on good ground where it grew and became grain.’” Matthew 13:3-8 (ICB)

Many Christian preachers and writers have discussed this parable of Jesus. It seems that there is often a negative connotation in the discussions. We must not be like the road, the rocky ground, or be among the thorny weeds. I don’t disagree with these applications, but I think that we are missing the bigger picture. The parable is not about the ground; it is about the farmer planting the seed. And the farmer spreads his seed everywhere. The seed represents the good news that Jesus wants to save us. As modern-day farmers, we want the best yield, so we are selective about who we choose to share our good news with. But the farmer in the parable planted seed everywhere.

Gentle Reader, modern farming techniques produce much higher yields than how Ephraim Bale farmed on his rocky fields on the steep hillsides of his farm over 100 years ago. But Ephraim grew crops in a place that modern farmers could not and would not. Were his harvests bountiful? No, they were not. But they were enough to raise a family. We, as Christians, are given the job of planting the seeds of the good news about Jesus. But we are often very selective about who we share our good news with. Jesus tells us to “go into every part of the world. Tell the good news to everyone.” Mark 16:15 (WE) Who will you share your good news with today?

Posted by Richard Lawry at 7:22 AM