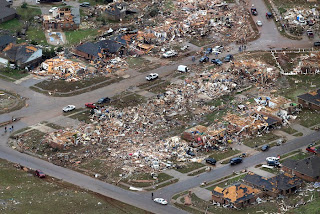 On May 20, 2013 a devastating tornado ripped through Moore, Oklahoma. Authorities say 24 people, including eight children, perished in the twister.  The storm hit on the second consecutive day of tornadoes in Oklahoma, packing peak winds of 200 mph.  The tornado spent 40 minutes traveling 17 miles on the ground and devastated an estimated 30 square miles that included neighborhoods and two elementary schools.  Emergency workers have pulled more than 100 survivors from the debris of homes, schools and a hospital.

Below you can see the path the tornado took.

In these aerial photos you can see the Plaza Towers Elementary School in Moore, Okla., before and after it was hit by the massive tornado. Seven second- and third-graders from this school were among the 24 killed in the tornado. 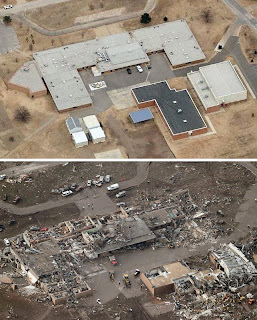 A friend is in Moore, Oklahoma right now giving out meals to the victims and also the volunteers.  Here are a few photos that she has taken. 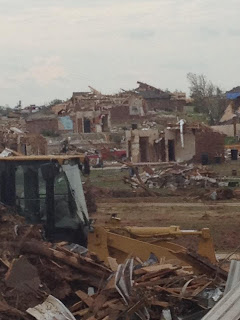 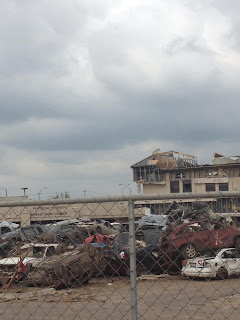 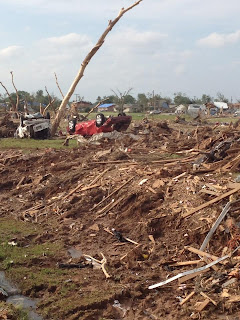 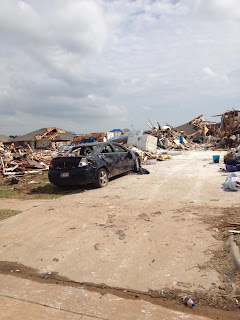 The devastating tornado of May 20, as bad as it was, is not the worst tornado to hit Moore.  On May 3, 1999 Moore was hit with an extremely powerful F5 tornado in which the highest wind speeds ever measured, 302 miles per hour, were recorded by a Doppler on Wheels radar. Throughout its one hour and 25 minute existence, the tornado covered 38 miles, destroying thousands of homes, killing 41 people and leaving $1 billion in losses behind.

Tornadoes cause tremendous amounts of damage.  I know this all too well because on April 9, 2009 a tornado hit my town of Mena, Arkansas.  Fortunately for us neither our home or our business were damaged, but over 600 homes were damaged when a F3 Tornado, with 136-165 mph winds, hit Mena devastating a 25 block area. 100 homes were totally destroyed and over 600 damaged.  3 people lost their lives in the storm.  Here are some photos that I took two days after the tornado.

Here is what I wrote about the tornado two weeks after the storm.

It has been over two weeks since my town of Mena was severely damaged by an F3/F4 tornado. I have not been to the damaged side of town for two weeks. Because I install auto glass I have been busier than I have ever been in my life. I am trying to get as many vehicles usable for people as I possibly can. The destruction of homes, cars and property is beyond my ability to describe. I have been getting up at 5:30 A.M. to go to work, and working until after 10:00 P.M. I come home, take a shower and crawl into bed and the next thing I know the alarm is going off.

I have never been so thankful for a Sabbath day as I was this week. God knew what he was doing when he created the Sabbath day and told men to rest from their labors on the Sabbath. Today has been wonderfully refreshing for me physically and spiritually. I had the first good nights sleep I have had in a while, and was so blessed by our Sabbath School class and Pastor Dan's sermon.

This afternoon we drove into the damaged part of town and took some photos. The sights were very depressing as I thought of how many people in my small town have been affected by this disaster. Officials estimate that over 600 homes have been damaged. As I surveyed the damage today I feel that the estimates are probably low. With the amount of homes damaged I'm sure that 2,000 people or more were affected by the storm. The population of Mena is between 5 and 6 thousand, so nearly half of the population are dealing with the aftermath of the storm.

This photo really brought to my thoughts what people are having to deal with. Many of the damaged homes are still being occupied because the people have no place to go. As I was taking photos from the street this little girl was walking into her house. Earlier we had seen a young girl standing in the doorway of her damaged home looking out into the street with a forlorn look on her face. You can multiply her feelings by a thousand.

What is amazing in a disaster like this one is the extraordinary amount of work it is to clean up. These pictures were taken 16 days after the tornado, and there have been so many people working so hard with the clean up, and it still looks like this. Our tour of the town today left us feeling depressed and overwhelmed.

As we drove through town we passed the Salvation Army location. The Salvation Army does so much for the people of this town, but their building was damaged and is unusable. Even though their building isn't usable, they have been helping here in town along with so many other churches and agencies. The volunteers come from many different churches and organizations. The help and support have been utterly amazing. I came across this thank you note written on a house that says it all.

My thoughts and prayers are with those affected by the Oklahoma tornadoes this year.

Posted by Richard Lawry at 8:01 AM