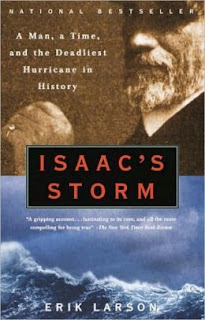 This weekend we are going to visit my son and daughter-in-law in Conroe, Texas.  We have planned a day trip to Galveston, Texas.  I'm looking forward to visiting Galveston again.  The last time I was there was in December 2008.  At that time Galveston was recovering from Hurricane Ike.  There was still lots of damage visible.  Galveston has had it's share of hurricanes.  The hurricane that hit Galveston in 1900 was so destructive that it is known simply as the Great Storm.

Several years ago I read the book "Isaac's Storm", that told about the Great Storm of 1900 by telling the story of Isaac Cline. Isaac was the chief meteorologist at the Galveston, Texas office of the US Weather Bureau from 1889-1901. Some friends of mine from church, Dave and Fay Wiebe, heard me refer to the "Great Storm" of 1900 in a sermon. They brought me a hand typed account by a relative of theirs who survived the storm. The account was dictated and signed by Carrie M. Hughes, and copied by Irby B. Hughes August 9,1957 in Palestine, Texas. 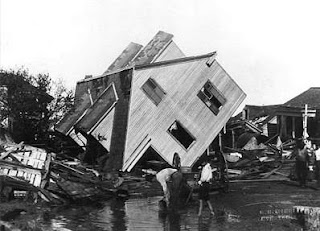 The story tells tells of how 19 people took refuge in the house. As the water rose, they went to the uppermost room in the house. This is what Carrie Hughes wrote about what happened next. "The tremendous wall of broken houses and debris had struck our house, like a battering ram and crushed the underpart, letting the upper part into the water. As it settled down I felt the ceiling touching the back of my head with the water just under my chin. Instantly the roof of the house seemed to blow over from the south throwing little Mattie and me into a corner of it. The next thing I knew I felt ourselves slipping out. I clutched at the ceiling or walls but could catch hold of nothing. As we slipped into the water my hand was grabbed by Eliza Williams, a colored woman whom I knew well. She drew me partly onto the raft upon which she and her daughter Hattie Banks were floating."

Five members of this family made it through the ordeal and 2 did not. As I read the story, waves of emotion swept over me. I have read many survivor stories before, but this one seemed different, as it was a remembrance recorded so that family members would know what happened that night. Because of my friendship with the Wiebe's it seemed real, like I knew the person telling the story.

This is the way that Carrie finished telling her story. "How gladly would we have lost every dollar we possessed could we have kept dear Mattie and Stuart with us, but we do not morn them as one without hope, knowing we shall meet them again. It is such a comforting thought that they were Christians. We do not know where their beloved remains are resting. It may be in one of the numberless unknown graves that dot the whole face of beloved Galveston. It may be they are resting in the depths of the bay or gulf, or their ashes may have mixed with the earth from which they sprung. Whatever may have become of them we know they are safe in the arms of Jesus."

More than 6,000 men, women and children lost their lives during the Great Storm.   It was the deadliest natural disaster ever to strike the United States.  It is hard to imagine what the people of Galveston went through.  Reading the story of her family as written by Carrie Hughes gave me an idea of the terror that people experienced.

I highly recommend the book, "Isaac's Storm", by Erik Larson.  The author uses Cline's own telegrams, letters, and reports, the testimony of scores of survivors, and our latest understanding of the science of hurricanes, to tell the story of one man's heroic struggle and fatal miscalculation in the face of a storm of unimaginable magnitude.
Posted by Richard Lawry at 7:16 PM