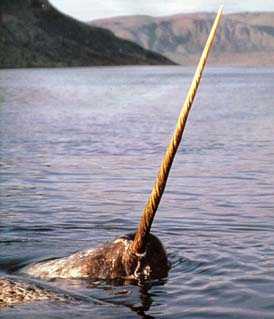 During the Middle Ages the people of Europe believed that unicorns existed. The King James Version of the Bible uses the word unicorn eight times. Unicorn horns were often found in cabinets of curiosities in Medieval and Renaissance Europe.  They were most often examples of the distinctive straight spiral single tusk of the narwhal whale. They were brought into Europe as a very valuable trade item, and sold as horns from the legendary unicorn; being of ivory, they passed the various tests intended to spot fake unicorn horns. Elizabeth I of England kept a "unicorn horn" in her cabinet of curiosities.

In 1967 when I was just starting to pay attention to the radio, The Irish Rovers had a top 40 hit with "The Unicorn". It sold 8 million copies worldwide and reached #7 on the US charts. Here is a copy I found on YouTube.

Listening to The Unicorn Song always makes me smile.  I found out a couple of interesting things about the song.  The first interesting fact is that The Irish Rovers were a Canadian band.  They are still touring, almost 50 years later.  The song was written by Shel Silverstein, who was a cartoonist, poet, recording artist and is probably best known for his children's books.  He was a very eclectic songwriter, penning such songs as "A Boy Named Sue", and many of Dr. Hook and the Medicine Show hits including "Sylvia's Mother" and "The Cover of the Rolling Stone". 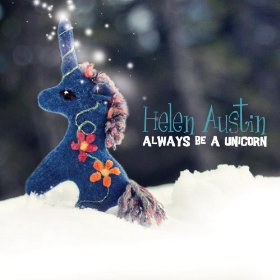 This year I added another Unicorn themed album to my record collection, Helen Austin's Always Be A Unicorn.  I really enjoy Helen Austin's music.  I first became acquainted with her music through the song "Relay" which she wrote for Relay For Life.  This year she released her first children's album, "Always Be A Unicorn".  The record was nominated for a JUNO in the Children's Album of the Year category at Canada's Music Awards.

You can watch the YouTube video of the title track here.

Posted by Richard Lawry at 7:07 AM