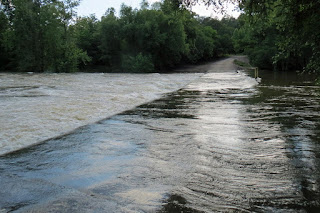 W is for Water.  As in too much water.  In our area on May 30th there were severe thunderstorms, tornadoes, and heavy rain.  My wife and I were on our way home from Little Rock when we encountered the storms. We stopped in Hot Springs and waited in a Walgreens store for about an hour until the Tornado Watch expired. As we traveled home we saw where a tornado had crossed Hwy 270. Crews had cut trees so that traffic could pass but power lines were still down.  We listened to the scanner and heard about tornadoes in our county. When we reached Mt. Ida we were under another tornado watch, so we stopped at the Dairyette to wait out the storm. I took this video of the heavy rain from the front door. 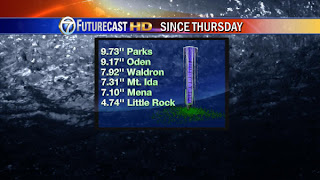 We arrived home safely, but not before seeing tornado damage near Oden.  The next day we learned that the heavy rains had caused flooding in the Y-city area and that there had been loss of life. In the early morning hours, Scott County Sheriff Cody Carpenter and Arkansas Game and Fish Officer Joel Campora lost their lives in the line of duty. Both men died attempting to save the lives of helpless people trapped in a flooded home. 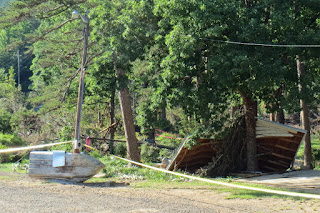 Last weekend we drove up to Y-city and saw some of the damage that the flood caused.  A gas station was damaged and a church had floated off of it's foundation. 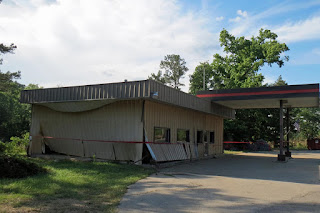 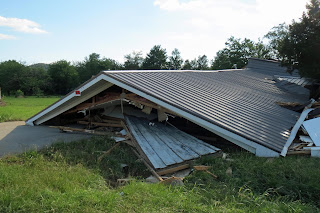 The May 30th flood was not the first time that I have been in close proximity to a flood that caused loss of life. 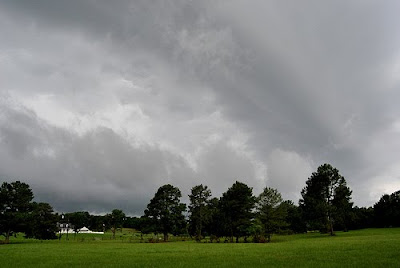 Thursday evening, June 10, 2010, I traveled to Glenwood to pick up a load of windshields. As I traveled I was watching the weather because there were supposed to be storms on the way. It was raining lightly but I had returned home before the it started raining harder. After I had made it home, the sky turned a green color and we were a bit nervous, but when we checked the TV and internet we found that we were not under any watches or warnings. Soon after I got to work Friday morning, My wife called me and told me that there had been terrible flooding at the Albert Pike Campground with many dead and many missing. The Caddo and Little Missouri Rivers had flooded during the night. 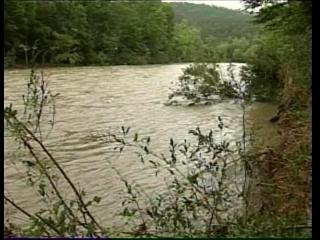 The Albert Pike Campground is located about 45 minutes from Mena over gravel roads deep in the heart of the Ouachita Mountains. Twenty people including eight children lost their lives in the flood caused by up to nine inches of rain that fell in the early morning hours, catching many campers at Albert Pike Campground off-guard.

The park is situated in a valley between two heavily forested hills, near the Little Missouri River. The "Little Missouri" usually has a water level that is so low, it looks more like a creek. People can easily wade across the river. That fateful night the Little Missouri got hit with 8 to 9" of rain within a very short period of time. The water level went from 3 feet to 23 feet from midnight to around 3:00am. 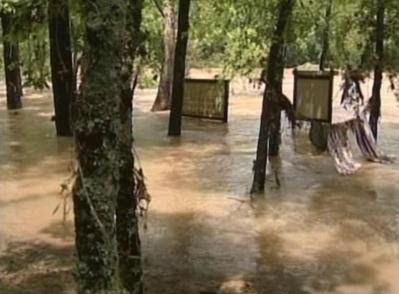 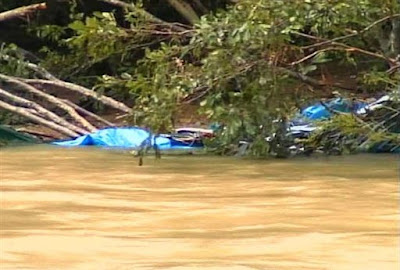 A U.S. Forest Service spokesman stated that it would have been impossible to warn everyone at a the Albert Pike campground that a flood was coming because cell phone service is spotty and there are no sirens in the sparsely populated area. Some parts of the valley are so steep and craggy that the only way out is to hike downstream. Any hikers who had taken cars to the campsites would have been blocked at low-water bridge crossings that are inundated when the rivers rise. 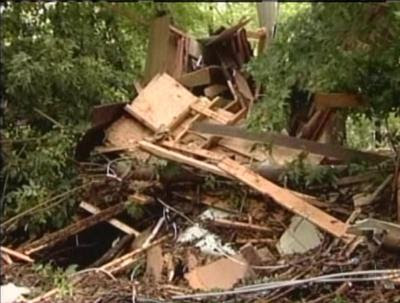 The raging torrent poured through the valley with such force that it peeled asphalt off roads and bark off trees. Cabins dotting the river banks were severely damaged. Mobile homes lay on their sides. 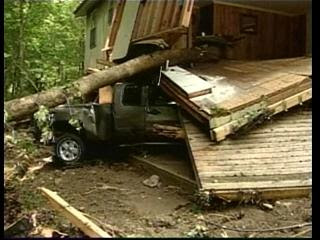 The first time that I was close to a tragic flash flood was on July 31, 1976, while we were living in Loveland, Colorado. A violent rainstorm sent a rampaging wall of water through Big Thompson Canyon. The massive flood killed 144 people. My wife and I along with my family had been picnicking along the banks of the Big Thompson River that afternoon. When it started to rain we packed up and drove home through heavy rain. We didn't know there had been a flood until the next morning. 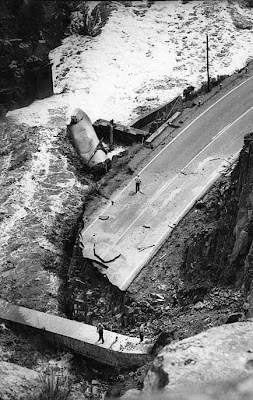 Events such as these floods always bring questions to my mind. Why do these terrible things happen and why have I been spared? I don't have the answers as to why so many tragedies happen. I do know that ever since sin came into this world through Satan there have been terrible tragedies. I suppose that Adam and Eve asked "why" when Cain killed his brother Abel.

The only promise that a Christian has in this life is that there will be trouble. Our trouble free existence will be in Heaven where God will wipe away all tears.

Why do bad things happen? Because we live in a sinful world. I know that's not the kind of answer we like, but there is no better answer available.

I am eagerly looking forward to the day when "God will wipe away all tears from their eyes; and there will be no more death, neither sorrow, nor crying, neither shall there be any more pain: for the former things are passed away".

Posted by Richard Lawry at 7:06 AM