And So Did I 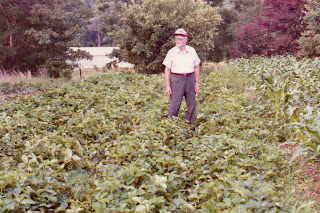 My Grandpa Lawry loved to tell stories,and jokes.  He loved to sing songs and recite poetry.  He knew many poems that he could quote from memory including The Song of Hiawatha by Longfellow.  One of the poems that he would often recite was "And So Did I".  In my memory I can still hear him reciting the poem with a twinkle in his eye.

That long lank dude that sparks our Sue
Was at our house last night
And talk about having fun,
Well I thought I'd die outright!
Laugh, I am laughing yet,
I only have to think and then I go into a fit!
We went to supper and of course,
We had a dandy spread.
Sue trotted out the chocolate cake,
And Ma her fancy bread.
That long lank dude he stuffed himself
With cake, preserves, and pie,
Then drank sixteen cups of tea.
And so did I!

Most folks in love don't eat at all
But Jim ain't one of such.
He says that being in love made him eat
Just twice as much.
Up from his chair he staggered,
You could almost see him swell.
He'd ate so much how he got up
Is more than I can tell.
I saw him beckon Sue
She answered with her eye,
And off into the parlor sneaked,
And so did I!

They made for the old setee
In the corner by the door,
While I crawled in behind to hide
Where oft I'd hid before.
With Sue's steel hat pin in my hand
Ten inches long or more.
I heard him whisper," Sue,
Just let me kiss you once".
Sue cried Jim if you do
I'll get right up and run.
And then she giggled foolish like,
You know how young folks speak.
Before the parlor lamp is lit
And things are kind of dark.
Well Jim kissed her good and hard
And Sue yelled, "Oh! Fi!"
And jabbed her fist into Jim's ribs,
And so did I!

I bobbed down quick, he didn't see
For love you know is blind.
And then I started in with cord
His swell coattails to bind.
He'd on a new "Prince Albert",
For Jim was quite a card,
And for you knew a thing,
I had him tied up good and hard.
Then just as he was kissing Sue,
I jabbed him in his thigh.
He yelled and rolled in fourteen fits,
And so did I.

You must know Jim hit the ceiling
And the settee went there too.
Then round and round he dragged it
Like a mule hitched to a truck.
Til both his coattails tore loose.
Then Jim just cussed his luck.
The neighbors heard the yelling
And come rushing through the door
And stumbled over Sue
Who lay unconscious on the floor!
We soused her too with water
Then an argument arose
As to just what old animal had
Bit Jim through his clothes.
Ma thought it was a snake,
Sue thought it lightening from the sky
But at last they blamed it on the cat.
And so did I!

Posted by Richard Lawry at 1:35 PM