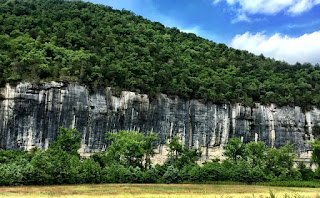 The warm evening sun shone on the towering and picturesque Roark Bluff. The Buffalo River rushed past the bluff, which is one of the most iconic and photographed bluffs along the river. In an open grassy field at Steel Creek Campground, over one thousand people gathered, waiting for the concert to begin. The band, National Park Radio, would be playing a free outdoor show in this beautiful location for the fourth consecutive year.

National Park Radio is a modern folk band from Harrison that is known for its hopeful, heartfelt lyrics with themes about life, love, and difficult choices, all while echoing the enduring beauty of the band’s deep-seated roots in the Ozark Mountains. I first heard them when they headlined the 2018 Lum and Abner Days Festival. I became a big fan of National Park Radio and their music. I made plans months ahead to attend the Steel Creek concert. The concert date just happened to be on my 44th wedding anniversary. 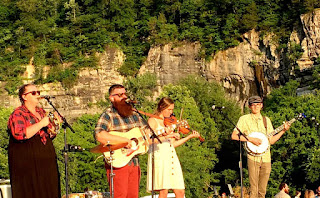 In an article about the concert, Superintendent Mark Foust of the Buffalo National River said; “This is a highly popular event among our local communities and park visitors alike. Last year’s concert brought out almost 1,300 people, many of whom spent the weekend in the area and supported local businesses while they were here. This event has proven year after year to cultivate stewardship and appreciation for the Buffalo River and the Ozarks through National Park Radio’s poignant lyrics, and it has also served as a great boost for the local economy.”

My wife and I, along with my sister, brother-in-law, and granddaughter, were among those who boosted the local economy. We rented the lovely Azalea Falls Cabin near Kingston and had a wonderful anniversary dinner at the Low Gap Café.  We arrived at the campground early in the afternoon. So early, that we were the first to set out our chairs in front of the stage. We spent the afternoon swimming in the Buffalo River and picnicking while taking in the incredible scenic beauty of the area. 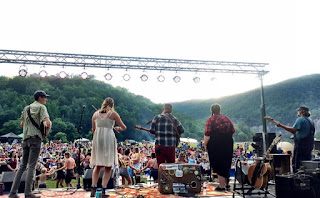 All afternoon people streamed into the concert area, and by the time the show began, the field was a teeming mass of people. When the first strains of music filled the air, everyone in the audience cheered as they settled down to watch the band play with the beautiful bluffs above the Buffalo River in the background. During the intermission, I was able to talk with the leader of the band, singer/songwriter Stefan Szabo, and asked him if he could acknowledge our anniversary and told him that we considered, “If the Rain is Fallin” our song. The song begins, “If the rain is fallin', it makes me think of you. And when the birds are callin', it reminds me too.” And it includes the lines, “And though the years have tired and worn us. We hold hands, and I can't hide, that now the only thing I truly need is just to have you by my side.”

Before the band played “If the Rain is Fallin',” Stefan let everyone in the crowd know that it was our anniversary and that we had chosen to spend our special day at the concert. He then dedicated the song to us. It was a special moment and came as a big surprise to my wife. After the concert, National Park Radio posted on social media; “We had another magical evening with all of our Buffalo National River family at Steel Creek! You guys and this place completely fill our souls. We are forever grateful for the love and support you all give us.”


Why do we celebrate wedding anniversaries? I think that it is because we make a covenant with God to become like one person. “A man leaves his father and mother and is joined to his wife. The two of them become one.” Genesis 2:24 (NIRV) Celebrating your anniversary says, “you matter enough to me to do something special to remember our union.” Remembering helps you continue to value each other and reflect on all you have been through since you were first married. And if it’s anything like our marriage, you’ve been through a lot.

We celebrate wedding anniversaries because if there is anything that should be celebrated, it’s a time-tested marriage. Even if you haven’t been married that long if you have made it to at least one of your anniversaries, your marriage has been tested. There is something special about another year of marriage that deserves to be celebrated. It is sacred because you have kept a covenant to God and your spouse. Your marriage milestone is meant to mean something. It is not just another day that comes and goes without recognition. King Soloman wrote; “Let your fountain be blessed, And rejoice in the wife of your youth.” Proverbs 5:18 (NKJV) and Paul wrote, “on top of all this you must put on love, which ties everything together and makes it complete.” Colossians 3:14 (NTE) 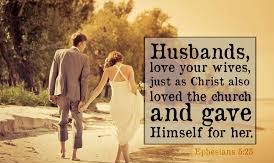 In Ephesians 5:25 (NKJV) the Bible tells us, “Husbands, love your wives, just as Christ also loved the church and gave Himself for her.” When a bride and groom are in love, they can think of nothing else but each other. That is the kind of love God has for His people.  The symbol of marriage between God and his people also occurs in the Old Testament. In Isaiah 62:5 (NLT) it says, “God will rejoice over you as a bridegroom rejoices over his bride.”

Gentle Reader, your relationship with Jesus is meant to be a symbol of your marriage. They are both by grace. A good marriage only happens because your partner gives you grace. They both require focused attention and learning more about the other. So celebrate your marriage anniversary and enjoy the blessings of being together over time. It is something to be proud of because God says marriage is meant to last a lifetime. “Therefore what God has joined together, let no one separate.” Mark 10:9 (NRSV)

Posted by Richard Lawry at 5:08 PM