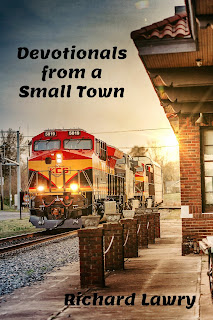 The older Chevy van pulled into my driveway as I was installing a windshield. The van’s owner, Tom, climbed out of the van and came over to talk with me. He was having a problem with the windshield and wanted to see what we could do about it. We discussed the issue and scheduled a time to work on the van. Tom was very friendly, and we visited for a few minutes after scheduling the work. As we talked, Tom told me that he had spent thirty years a conductor on the Southern Pacific and the Union Pacific railroads. When he talked about his job as a conductor, it was apparent that he had loved his job.

When he was ready to leave, I told Tom that I had a gift for him. I gave him a copy of my latest book. The cover of the book features a photo by Whitley Lind Photography of a Kansas City Southern train traveling on the tracks at the Mena depot just before sundown. I thought that he would like the photo, and he did. As he left, Tom thanked me and said that he would see me for his appointment in a couple of days. 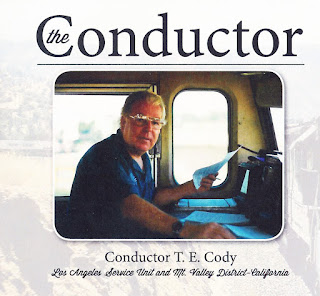 Two days later, Tom drove the Chevy van to my shop for his appointment. It was a dreary drizzly day and had rained most of the morning. I told Tom that because of the rain I would not be able to seal the windshield on his van, and we would have to reschedule. Even though I was not able to work on his van, Tom stayed and visited. He told me that he enjoyed my book and that he had a gift for me. He gave me a DVD of a song titled “The Conductor,” written and performed by Sherry Lovan. The song came about from the writing that Tom did while he was on the railroad. Sherry wove his words and story into a beautiful song.

While we were visiting, I asked Tom about his duties as a conductor. When I was a kid, I always liked watching a freight train go by, and waiting for the little red car to appear at the end. I knew that the conductor was in that little red caboose. But today’s trains don’t have a caboose, so I didn’t realize that they still had conductors. Tom explained to me that the conductor reviews schedules and shipping records. They make sure that cargo is distributed evenly along the train and maintain communication with the train's engineer and traffic control personnel. The conductor monitors any equipment issues or mechanical problems and arranges for repairs and stops when necessary. Tom said forcefully, “the engineer only drives the train, but the conductor is in charge of the train. He is the boss.” 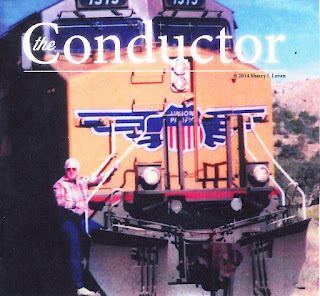 Tom’s words made me think about the Christian life. The old song, “Life Is Like A Mountain Railroad,” came to my mind. “Life is like a mountain railroad. With an engineer so brave. We must make this run successful. From the cradle to the grave.” Sometimes Christians teach that we should let God be the engineer in our lives. But I don’t think that is a good analogy. The song’s analogy is a better one. We are the engineer in our lives. We are the drivers. God has set us free to drive our own lives. “It is for freedom that Christ has set us free. Stand firm, then, and do not let yourselves be burdened again by a yoke of slavery.” Galatians 5:1 (NIV)

If God has given us the freedom to drive our lives, what part does He play in our lives? If we are in charge, does that leave God out? I think that Tom’s explanation of the conductor’s job is also a good explanation of God’s role in our lives. “The engineer only drives the train, but the conductor is in charge of the train. He is the boss.” God wants us to drive, but we need to remember that He is in charge. On a train, the conductor makes sure cargo is loaded and unloaded and properly accounted for. He is responsible for the train, the freight, and the crew. The conductor is responsible for coordinating relationships among the railroad, the shipping company, and the engineer. He must know the train schedules for the railroad to coordinate loading and unloading of freight. Communicating these things with the engineer is also important since the engineer moves the train from one stop to the next 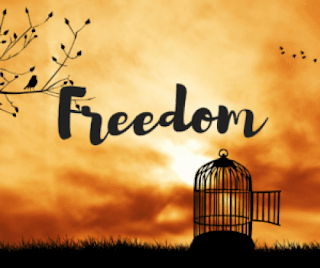 “For you have been called to live in freedom, my brothers and sisters. But don’t use your freedom to satisfy your sinful nature. Instead, use your freedom to serve one another in love.” Galatians 5:13 (NLT) God has given you the freedom to drive your train. Sometimes we look at someone who has made bad decisions and say, “their life is a train wreck.” God had given you the freedom to be the engineer of your life’s train, but we need to remember that God is the conductor. David wrote in Psalms 119:44,45 (NCV) “I will obey your teachings forever and ever. So I will live in freedom, because I want to follow your orders.” Living in freedom, and then wrecking the train because we won’t listen to the conductor isn’t much freedom.

Gentle Reader, everyone craves freedom, but what is freedom? I once heard a preacher say that “freedom is being able to do what you please without considering anyone except your spouse and your kids, the company and the boss, neighbors, and friends, the police and the government, the doctor and the church.” In human society, chaos results if we consider just our interests. We are the engineers of our life, but we need a conductor. Don’t kick the conductor off your train. “Live as free people, but do not use your freedom as an excuse to do evil. Live as servants of God.” 1 Peter 2:16 (NCV)