My An Arkie's Faith column from the December 6, 2017, issue of The Mena Star. 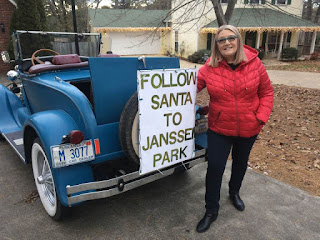 Last year, the Chamber of Commerce asked us to drive my Dad’s Shay Model A in the Christmas Parade with Santa Claus riding in the rumble seat. For those who are too young to know what a rumble seat is, it is an upholstered exterior seat which folded into the rear of a car. Rumble seat passengers are exposed to the elements and receive no protection from the regular passenger compartment top.

This year the Chamber of Commerce once again asked if we would drive Santa in the Christmas Parade. The Shay Model A had been driven very little since last year’s parade. I decided to get it out and drive it over the Thanksgiving holiday to make sure everything was in good working order before the parade. My granddaughters, ages twelve, ten, and seven, spent several days with us at Thanksgiving. They loved to ride in the rumble seat. Since only two could ride at a time in the rumble seat, there was always a discussion about who would ride there. The adults also enjoyed riding in the rumble seat. The two youngest granddaughters were riding in the front of the Model A when they looked through the tiny rear window and caught their parents kissing in the rumble seat. They thought that it was gross and very funny at the same time. 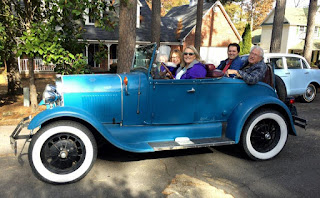 Whenever you drive an old car, you have instant friends. People will approach you and ask about the car. While I was driving with my granddaughters, we pulled into the gas station to put gas in the Model A. The station was busy, and we had to wait for a pump. My granddaughters were very animated, laughing and giggling in the rumble seat. The lady at the pump next to us came over to talk to us. She commented on the car, and how cute the girls were. She told me that the woman with her in the car was ninety-five years old and that she had been very excited to see the old car with the rumble seat. She remembered when she had ridden in rumble seats when she was young and told several stories about her rumble seat experiences.

When rumble seats were commonplace, most people wanted to ride in the front of the car, and the rumble seat was considered second best. Although rumble seats were fun and somewhat exciting to ride in, rumble seat riders were exposed to the wind, the noise, the bugs, the rain and the sun. People jokingly referred to the rumble seat as the mother-in-law seat. John Cougar Mellencamp included the song “Rumbleseat” on his 1985 album, Scarecrow. He sang, “I am a pitiful sight. I can't even get one thing right. I know just what it's like to be riding in the rumble seat.” 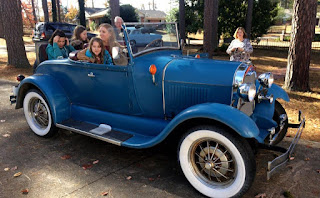 After seeing the Model A’s rumble seat, a customer at my shop told me a story about her own rumble seat experience: "I remember when I was teaching at a one-room school with all eight grades. My beau came courting one night, and after we had gone about a half-mile from home, I heard a slight noise which caused me to look through the rear window of the car. Grinning like a Cheshire Cat and peeking through from the other side sat my little brother, who had hidden in the rumble seat. Would you believe that my beau took him home instead of dumping him out and making him walk?" My cousin tells a similar story about his Dad. The difference in the stories is that his Dad was kicked out of the car and had to walk three miles back home.

Why is it that we get nostalgic when we see old cars. Why do those who remember rumble seats smile when they see one now? Nostalgia is a feeling of pleasure and sometimes slight sadness at the same time as you think about things that happened in the past. Nostalgia is selective memory. We remember the good things and don’t think about the bad. Nostalgia removes the rough edges from the good old days. 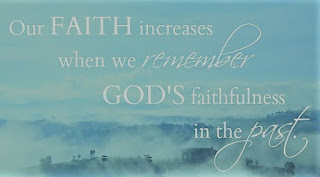 God wants us to leave the bad things that have happened to us in the past. He wants us to look to the future, but he does want us to remember. Psalms 105:4,5 (ICB) says, “depend on the Lord and his strength. Always go to him for help. Remember the wonderful things he has done. Remember his miracles and his decisions.” When we forget what God has done for us in the past, we aren’t likely to have a close relationship with him. In Psalms 78:11,12 (NRSV) the Psalmist wrote about the Ephraimites, “they did not keep God’s covenant but refused to walk according to his law. They forgot what he had done, and the miracles that he had shown them.”

The nineteenth-century American writer Ellen White wrote, “we have nothing to fear for the future, except as we shall forget the way the Lord has led us.” It is good to remind ourselves daily of our own experiences of God’s past protections and the ways He has rescued us. As we look forward to the future, it is helpful to remember how God has been there for us in the past. “Remember the old days. Think of the years already passed.” Deuteronomy 32:7 (NCV) 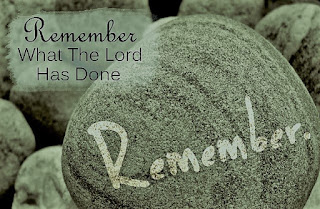 Gentle Reader, most of us tend to dwell on our current difficulties, whatever they may be, and to forget the many times that God has helped us in the past. In the Bible, we read that God regularly urged his people to remember the many ways that He had provided for them, or helped them, in the past and to believe that He would do so again. “Hold on to the Lord and do what He asks you to do. He has helped you before, and He will do it again” Joshua 23:8 (EECW) “I am certain that God, who began the good work within you, will continue his work until it is finally finished on the day when Christ Jesus returns.” Philippians 1:6 (NLT) 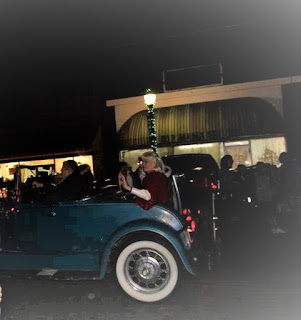 Posted by Richard Lawry at 8:03 AM