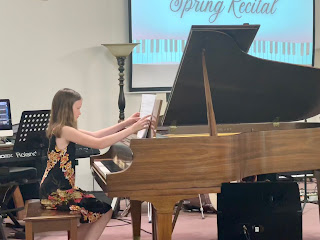 My granddaughters looked beautiful in their dresses as we made our way out the door and headed to the spring piano recital. They had been practicing their recital pieces, and it sounded great to me. I asked them if they were nervous, and they answered, "a little" and "not really." Seeing their confidence and composure reminded me of the years I took music lessons and was always terrified of recitals. But instead of being scared, they seemed excited.

We made our way inside the sanctuary when we arrived at the United Pentecostal Church of Ringgold. The piano students sat in the first two rows, and my granddaughters found their seats with the other students. When the recital began, the twitter of conversation died down, and the room became silent as everyone listened and hoped that each student would play their best. I sent up a silent prayer for each performer, remembering sweating through recital performances as a kid and hoping that no one would experience the panic that I always felt.

My granddaughter, Elisabeth, was second to play in the recital. As she stepped up to the piano and sat down, I slipped from my seat and made my way up the outer aisle to where I could film her. A few seconds after she started playing, the air conditioning came on in the sanctuary. As I filmed, I watched as the air from the air conditioning vent began to rustle the sheet music on the piano. The left side of the sheet music raised off the piano and looked like it might close. I watched the sheet music with a horrified fascination as it slowly waved back and forth. The page moved almost ninety degrees several times before drifting back down into place. 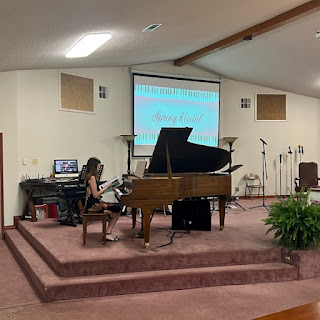 I feared that the distraction of the moving sheet music would cause Elisabeth to stumble as she played, but she handled the situation with a poise and maturity that amazed me. One time I saw a small expression of alarm on her face when it appeared that the sheet music might blow closed, but the page drifted back down as she played on. As the drama of the errant sheet music continued, I breathed a prayer, "please don't let this sheet music spoil her performance and cause her embarrassment." I let out a sigh of relief when Elisabeth finished the piece with no mistakes. Her following two pieces were played beautifully from memory, so there was no way that errant sheet music could spoil them.

After the recital, I talked to my granddaughters and told them I was proud of them. When I mentioned the errant sheet music, I found out that the audience was unaware of the drama. The way the piano was positioned, the errant sheet music could only be seen from where I was filming. No one listening to Elisabeth play had any idea of the difficulties she was experiencing. I thought about how often we see other people and think we know them well, but we cant see their struggles. 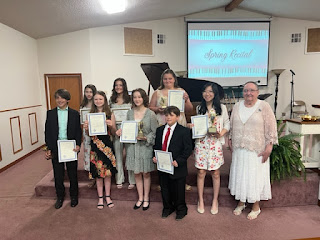 While I watched the errant sheet music and listened to the other piano students, I remembered growing up and taking music lessons. I played the trumpet and was in the band. I didn't mind practicing and could always learn to play my pieces correctly, but my nerves would get the best of me when it was a performance. I have terrible memories of botched performances. Once I was scheduled to play a trumpet solo for a church area youth conference. On the way to the meeting, we had car trouble, making us late in arriving. I was so unnerved that I could hardly make a sound with my trumpet. I wanted the ground to open and swallow me.

Have you ever found that something that you can do, have done, and have practiced many times, fails you when you are under pressure? For me, that was my trumpet. No matter how hard I practiced, I would make mistakes when playing for my music teacher or in front of an audience. In my junior year of high school, I transferred to a larger school and was too intimidated to try out for the band. I eventually stopped taking lessons, telling my parents that the pressure was too much. My trumpet sits forlornly in the garage. Now I can barely make a sound.

I recently heard a story that I'm sure never happened. But I liked the story and its application, so I will share it with you anyway. We will call it a parable. 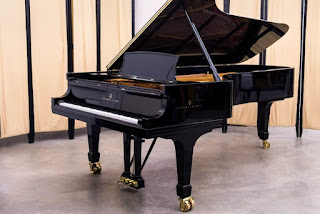 A famous concert pianist was preparing for a show when a group of admirers came to the concert hall. A little boy was there with his mother. He wandered away from her and found himself on a stage with a grand piano. Suddenly the curtains parted, and a spotlight lit the grand piano. The mother looked around for her son and saw him sitting at the piano on stage. He started playing "Twinkle, Twinkle, Little Star." The concert pianist walked up to the boy, put his arms around him, and began playing a counter melody as he whispered, "keep playing; you're doing great." The audience was mesmerized as he played alongside the boy. When they finished, the audience rose in applause.

Paul wrote in Philippians 4:13 (NKJV), "I can do all things through Christ who strengthens me." What we do for God in our own strength is like playing "Twinkle, Twinkle, Little Star" in a concert hall. For us to accomplish anything worthwhile, God will have to be by our side.

Gentle Reader, life is a lot like a piano recital. Whatever we do, people are watching us. While they see our actions, they may never see the errant sheet music that makes us panic. The best thing we can do is ask God to lead our lives. God will sit down beside us and turn our music into something beautiful. Jesus tells us in John 15:4 (NCV), "Remain in me, and I will remain in you. A branch cannot produce fruit alone but must remain in the vine. In the same way, you cannot produce fruit alone but must remain in me."

Posted by Richard Lawry at 7:35 PM