Whatever Happened To Kaiser 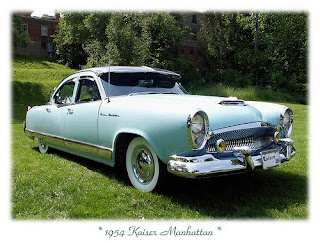 I know that one of the most burning questions being asked today is whatever happened to Kaiser automobiles. Since I am privy to just such information, I thought I would do my civic duty and give you this privileged information.

The Kaiser automobile was the product of the Kaiser-Frazer Corporation. The company was the result of a partnership between automobile executive Joseph W. Frazer and Industrialist Henry J. Kaiser of Kaiser Industries. The company rose from the ashes of the Graham-Paige Motor Company.

In August 1944, Joseph Frazer, former president of Willys-Overland, assumed control of Graham-Paige, and announced that the company would resume automobile manufacture after the war with a completely new car. The new car was to be called "Frazer" rather than "Graham". Frazer quickly had Graham humming with activity. While looking for financial backing, Frazer met Henry J. Kaiser who also had plans for a postwar automobile. The two agreed to work together and in August 1945 formed the Kaiser-Frazer Corporation to build a new Kaiser car. Two Kaisers were to be built for every Frazer, which was to remain a Graham-Paige product. Joe Frazer became president of both companies and Henry Kaiser chairman of Kaiser-Frazer.

Graham-Paige was unable to finance its share of expenses, so the company quit the car business, and transferred all of their automotive assets to Kaiser-Frazer. Kaiser automobiles were manufactured from 1946 to 1955, when declining sales forced the closing of Kaiser's domestic automobile operations. At that time production was moved to Argentina and Brazil, where the company turned out a series of sedans, trucks and Jeeps until the 1960's.

In 1953 Kaiser bought the Willys-Overland company, the producer of Jeep utility vehicles, and merged the Kaiser and Willys operations. By 1956 the company had stopped building Kaiser automobiles and was only building Jeep utility vehicles. The company changed its name to Kaiser-Jeep in 1963. By 1969, Kaiser Industries decided to leave the automobile business, which was sold to American Motors in 1970. Included in the sale was the General Products Division, which Kaiser had purchased from Studebaker in 1964. AMC renamed the division AM General, which remains an independent company and government and military contractor. AM General sold the rights to the Hummer name to General Motors in 1999 but continues to build the vehicles for GM.

American Motors Corporation manufactured Jeep vehicles until AMC was purchased by Chrysler in 1987. Chrysler wanted the Jeep vehicle line because of the rising popularity of utility vehicles. In 1998 Chrysler Motors, and Diamler-Benz merged to form Diamler Chrysler Corporation. The Jeep brand was one of the reasons that Diamler was interested in Chrysler.

Posted by Richard Lawry at 3:49 PM