On our way home from Baton Rouge last weekend we stopped in Lafayette, Louisiana. We had made plans to visit the Acadian Village which is a collection of buildings, gathered around a pond, that simulates an Acadian village of the 1800s. Most of the buildings were relocated to the Village from nearby towns. When we arrived the grounds were closed due to a funeral. We decided to visit the Vermilionville Living History Museum and Folklife Park instead. It was a beautiful day and our visit was lovely.

The Vermilionville park is one of the worlds largest physical representation of an early Acadian settlement using original structures (dating from 1790 to 1890), and new ones built in the style of the 19th century. The many Artisans on site demonstrate the folklife of the region representing a time period from 1765 to 1890. Here is my grandaughter Autumn learning about woodworking.

My Dad enjoyed telling the girls about how the old farm machinery worked.

The grounds were beautiful, and the weather was just perfect. Everyone enjoyed a lovely Sunday afternoon outside.

One of my granddaughters favorite places was the old schoolhouse. They liked pretending they were going to school in the olden days.

Elisabeth was too little to pretend she was going to school, but she liked to pretend that she was taking a pirogue down the bayou.

She soon realized that she would get a sunburn if she didn't put on her LSU hat.

Although everyone had a great time, I think Rebekah had the most fun. She spent the day catching and playing with roly poly bugs. She was too busy with her roly poly to pose for a picture.

We were finally able to get a group photo taken by another visitor at Vermilionville. 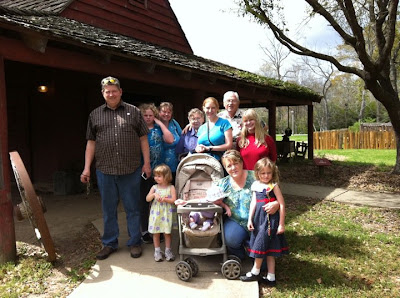 We had to cut our visit a bit short because we still had an 8 hour drive home from Lafayette to Mena. We didn't arrive home until after midnight. If you are ever near Lafayette, Louisiana I would recommend a visit to Vermilionville.
Posted by Richard Lawry at 9:57 AM