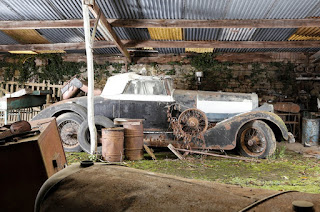 In 2014 a remarkable barn find of rare automobiles was made on a farm in the West of France. After the owner had died, the children inherited the estate, which included a collection of old cars that had been untouched for many years. Wanting to determine the value of the cars, they called France's leading antiques auctioneer. 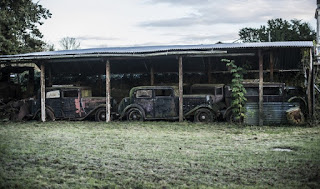 When the appraisers entered the property, they could see many makeshift shelters covered with tin. As they walked around the farm, they found more and more cars under the makeshift structures, and almost all of them were extremely rare. They found significant models from many of the legendary brands in European automotive history: Bugatti, Hispano-Suiza, Talbot-Lago, Panhard-Levassor, Maserati, Ferrari, Delahaye, Delage. The cars had been untouched for at least 50 years. The appraisers valued the cars at between 18 and 20 million dollars. The find was so significant that it was even reported in the U.S. press.

My Daddy recently sold his MG replica. Someone will be able to tell a “barn find” story about the car. In the late 70’s and early 80’s building kit cars on a VW chassis was very popular. In 1981 Daddy purchased a complete MG replica kit from MIGI. He spent many hours building the car. At about the same time he was building the MG, he built an addition to the side of his shop. When he completed the addition, the first thing that he stored in the new building was the recently completed MG replica. The little MG has never moved from that spot until just a couple of weeks ago. 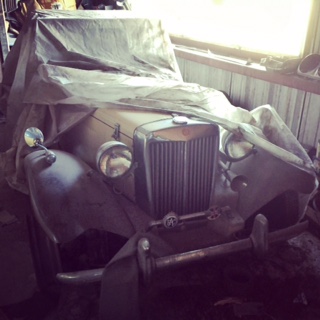 Daddy has never owned a car that wasn’t for sale. He has had many people interested in the little MG kit car over the years. But the value of kit cars dropped dramatically after he finished the MG. They fell out of favor, and the market was flooded with them. He had paid a lot of money for the full kit that included the gel-coat fiberglass body, complete interior, convertible top, and all new chrome bumpers and grill. No one was willing to pay the price he was asking for the beautiful little MG, and it just sat in the corner of the new addition.

After a few years, the little car was covered in plastic sheeting to keep the dust and dirt from damaging the finish. As the years went by, more and more parts were stored around the little MG until it was barely visible. When a deal was made for the MG a few weeks ago, it took several days to uncover the little car and get it out of the building. When we moved it outside, it saw the light of day for the first time in almost 35 years. 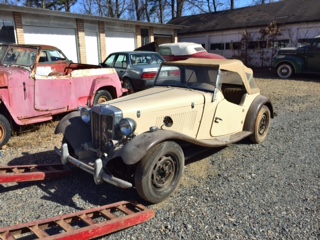 Under the dust and dirt that had accumulated in those 35 years, was essentially a brand new car. When the new owner of the little MG properly cleans and details it, the car will be beautiful once again. It will once again be a treasure.

In the Bible, there is a “barn find” story; well not exactly a barn find, more of a field find. We read about it in Matthew 13:44 (NIV). “The kingdom of heaven is like treasure hidden in a field. When a man found it, he hid it again, and then in his joy went and sold all he had and bought that field.”

Jesus was telling a story about the value of kingdom of heaven. A man found a treasure in a field. He stumbled across a “barn find.” He puts together a plan. He is so excited about his find that he sold everything he had and scraped all of his money together to buy the piece of land with the treasure on it. He knew that the treasure was very valuable and there was no question that he had to buy the field. 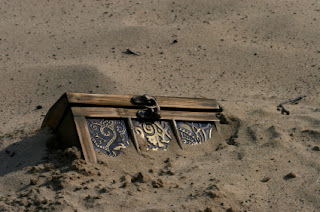 Can you imagine what his friends and family thought? I bet they thought he was crazy. Why would he sell everything to buy that piece of land? The didn’t know that by selling everything he owned, he was gaining a priceless treasure, worth far more. What is this treasure that is so important? Colossians 2:3 (GW) tells us that, “God has hidden all the treasures of wisdom and knowledge in Christ.”

Posted by Richard Lawry at 6:31 AM