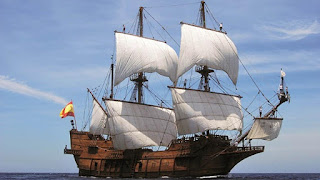 By the time he met the English merchant Michael Locke, Juan was a was a well-traveled seaman, who had perfected his skill as a pilot in the Spanish navy. His early voyages were to China, the Philippines, and New Spain; modern-day Mexico. In 1592, Juan led an expedition north up the coast of North America. When Juan returned to New Spain, he claimed to have found a passageway from the Pacific Ocean to the Atlantic.

The Viceroy of New Spain repeatedly promised Juan great rewards for his discovery, but he never received them. After two years, Juan traveled to Spain to make his case in person, but he was disappointed. He received no reward. It was during this time that Juan met English merchant Michael Locke. Juan told him the fantastic story of a marine passageway that connected the Pacific and Atlantic Oceans.

Michael Locke convinced Juan to offer his services to Spain's archenemy, England. Juan never worked for England, but it is through Michael Locke’s account that the story of Juan de Fuca is known to us today. Juan’s fantastic story of a marine passageway that connected the Pacific and Atlantic Oceans would be the catalyst for centuries of maritime explorers. 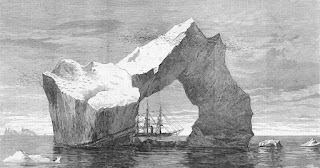 The search for the fabled Northwest Passage inspired explorers to seek out fame, adventure, knowledge, and riches. The empires of Spain and Great Britain were driven by the hopes of finding a naval trade route that would connect Europe to Asia and secure their dominance as an economic power. The story of the Northwest Passage is one of bold explorers and great empires fighting for a distant corner of North America.

Despite the lure of the imagined Northwest Passage, more than 100 years would pass before Spain, or any other nation would attempt such an exploring voyage again. In 1775, Bruno Heceta set out from present-day Puerto Vallarta, looking for Juan de Fuca’s fabled passage. He reached as far north as the west coast of Vancouver Island, then turned back south. On August 15th, Heceta arrived at the mouth of the Columbia River. Heceta thought that this was the passage discovered by Juan de Fuca. Heavy currents made it impossible for him to explore the bay, but he was sure that it was the mouth of a great river. He named it the St. Roc River.

In 1788, English fur trader John Meares was traveling south from Vancouver Island in search of pelts. He had heard about the big bay and surge of fresh water discovered by Bruno Heceta and set out to find it. On July 6th, Meares rounded a headland expecting to find the mouth of the St. Roc River. There he found a bay with treacherous sandbars. Conditions did not allow Meares to tell that the bay was the mouth of a river, so he called it Deception Bay and he named the headland Cape Disappointment, because of his disappointment at not finding the river. Cape Disappointment is now a Washington State Park. 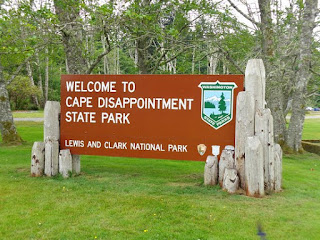 Have you ever been disappointed? Has someone let you down or have circumstances not worked out the way you hoped they would? Have you experienced the truth of Proverbs 13:12 (MSG). “Unrelenting disappointment leaves you heartsick.” We experience disappointment when life doesn’t go according to our plan. The problem with disappointments is that they can color our outlook on life, and can even change the way we see God. Chicago journalist, Sydney J. Harris, wrote, “a cynic is not merely one who reads bitter lessons from the past; he is one who is prematurely disappointed in the future.”

Many times, we as Christians allow our disappointments to color our view of God. I know that I have. We start out being disappointed by someone or some circumstance in our life, but when nothing changes, we become disappointed in God. 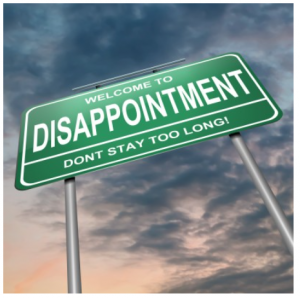 If disappointment is so inevitable, how do we recover from it? The disappointments we accumulate in a lifetime can stop us from seeing all the goodness God has planned for us. Here is the good news. “God, who has called you into fellowship with his Son Jesus Christ our Lord, is faithful.” 1 Corinthians 1:9 (NCV)

Remember that Jesus knew deep disappointment from his days on this earth. His disciples let him down continually. All forsook him, one denied him, and one even betrayed him. He knows the pain and frustration you are experiencing. “We have a high priest who can feel it when we are weak and hurting. We have a high priest who has been tempted in every way, just as we are. But he did not sin.” Hebrews 4:15 (NIRV)

Gentle Reader, when life’s disappointments come, the Christian still has a heavenly hope that no amount of earthly disappointment can take away. Paul wrote in Romans 5:2-4 (NCV), “we are happy because of the hope we have of sharing God’s glory. We also have joy with our troubles, because we know that these troubles produce patience. And patience produces character, and character produces hope. And this hope will never disappoint us, because God has poured out his love to fill our hearts.” When disappointments come in your life, remember that there will be a time when “God will wipe away every tear from their eyes; there shall be no more death, nor sorrow, nor crying. There shall be no more pain, for the former things have passed away.” Revelation 21:4 (NKJV)