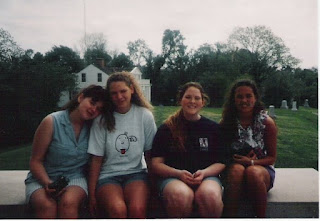 It was a beautiful fall day in 1994, and we were sitting on the front porch of our new home enjoying the evening. We heard the phone ringing, and my wife got up and went inside the house to answer the phone. Picking up the brick-sized cordless phone, she pushed the talk button and said, “hello.” Our daughter replied, “Mama, I need to talk to you about Thanksgiving. Can I bring someone home with me?”

Our daughter was attending a boarding school in northwest Arkansas. That evening, the dean had come to her with a request. “Domira, a new foreign exchange student from Ukraine, has just arrived at school and doesn’t know anyone yet,” the dean said. “Do you think she could spend the Thanksgiving holiday with you and your family?” “I will ask my parents,” my daughter replied.

When our daughter told us about the foreign exchange student and her need for a place to stay over Thanksgiving, we told her the girl was welcome at our house. Domira spent Thanksgiving with us, and we enjoyed getting to know her and learning about Ukraine. She experienced her first shopping experience in the U.S. at the Mena Wal-Mart. She told us that she would have to go to separate shops for milk, bread, fruit, etcetera at home. When Domira first saw our home, she wanted to know how many families lived there. She was surprised when we told her that only our family lived there. 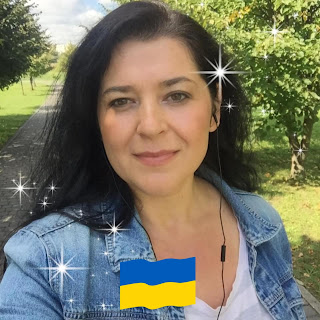 When Russian troops invaded Ukraine and headed for Kyiv, we were concerned for Domira’s safety. We had kept up with her through social media, but there was no information from her. We were relieved when Domira posted a video telling her harrowing story and letting us know she was safe on the seventh of April. I wanted to share her story with you, my readers. Here is Domira telling her story in her own words.

“Thank you, my dear family and my friends, so much for your support and prayers. It means a lot to me and helped me go through what I went through. I’m sorry I couldn’t answer all your phone calls and messages. I know that it’s not easy to understand everything going on now. 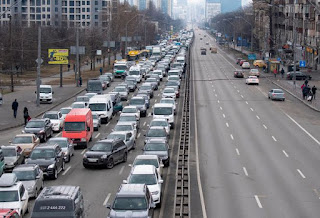 My apartment is located on one of the main streets where everybody gets into the city and gets out. Most of the time, between 6:30 and 12:00, we have a traffic jam because people outside of Kyiv are trying to get to Kyiv to get to work. At 6:30 in the morning on the twenty-fourth of February, everything stopped. Not a single car was trying to get here. But at the same time three lines were just packed; Three lines that wanted to get out of Kyiv. All those cars and buses, everything was just full, and I knew that it was impossible to get out of here by car or bus.

I went to the train station, and it was also full. At the same time, our bank system was shut down, so that means that you cannot buy any tickets online, you cannot pay by card, and you cannot buy any food or anything if you don’t have cash. So everybody was trying to get cash from the bank and we had lines of about 20-30 people who were trying to stay in the line to get some cash. 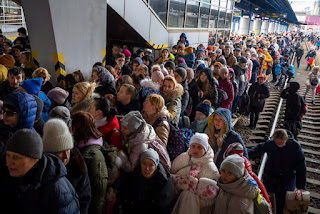 On the first day, I heard my first sirens. I’ve never heard in my life such a crazy sound. When I was trying to get home, I was almost there. I just needed a couple of minutes to get to my apartment when I heard the sirens; that meant that the bombing was starting the second time. When I looked around, everybody was just in panic, running around trying to find the safest place. Since that time, we have had sirens almost every hour. Sirens mean that somewhere there was a bombing and there were explosions. I could not get home that day. I couldn’t get home to get the most important things. That means that everything you packed in five minutes, everything that you can take with you in just one suitcase or one bag. You pack all your life in five minutes in one bag and just try to go somewhere in a safe place.

I knew that in the same day it was impossible for me to get out of here, and I went to see my friend. She stayed by herself, and she was also scared and panicked, so we stayed overnight there. The next day at 7:30 in the morning, we tried to get out of Kyiv. We heard sirens all night and shooting. We knew that we could not stay here; we had to get out. We knew that it was impossible to get out on the Main Street and the main highway. So we needed to find the small roads and get through the small towns, somehow, someway, to the place where it’s going to be not so far from Romania where it’s safe. We don’t know how we’re going to get there. We don’t have any plan, I guess nobody had, we just needed to go. 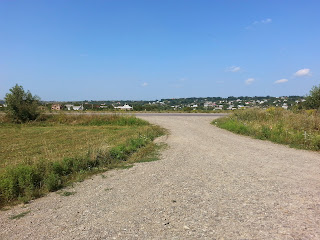 We got in the car and started to drive. It took us twenty hours to get to Chernivtsi. We went through small villages and towns on the way. We saw many tanks and military, and sometimes we didn’t even know if it was Russian military or Ukrainian. We drove through small towns and villages, and we drove through the forests and places that had no lights at all. We heard explosions all the time, but we had no idea when we were going to get to Chernivtsi or if we would get there. Because every time you hear an explosion, every time you see a tank somewhere, you don’t know if that’s your last minute, or if you’re going to make it, or if you’re going to still be alive. For twenty hours, it seemed like it was just impossible.

We got to the safe place at about 4:00 o’clock in the morning, and I just wanted to check the news to see what was going on in Kyiv. I saw that just a couple of minutes from my apartment, in the same place where I walked just a few hours before, Russian tanks had destroyed everything that’s around there. I know that I am one of the blessed people; that had a chance to get out and be in a safe place. 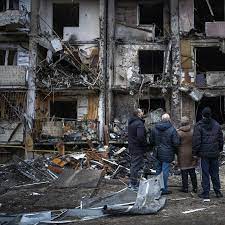 I know so many kids and women that were just trying to get out of Kyiv or many other places, and they were shot. They didn’t have a chance. It’s hard to understand and explain what’s going on and why kids were killed, why women were killed, and why they were raped. It’s especially hard to understand why some family members and some of your friends don’t believe you when you tell them what’s going on. I am not going to lose my energy explaining to somebody who doesn’t believe that the war is going on, that people were killed and I was one of them who could have been shot.

I’m just praying with everybody else that Ukraine will survive. We are praying and dreaming about the day when the war is going to stop. We are dreaming about the time when families can reunite. We’re dreaming about the time when Ukraine is going to be rebuilt. But so many people were killed, and you can’t forget that. I know that I can do as much as I can from my side, and I’m trying every single day to support and help people who stayed in Kiev and different parts of Ukraine. If you have a chance to help in any way, if you want to support, you can write me or you can call me. Thank you for your prayers. Thank you that you believe. God bless you.”

Gentle Reader, those affected by the war in Ukraine are not just nameless people. Please pray for Domira and all of the Ukrainians. “First and foremost, I urge God’s people to pray. They should make their requests, petitions, and thanksgivings on behalf of all humanity. Teach them to pray for kings (or anyone in high places for that matter) so that we can lead quiet, peaceful lives—reverent, godly, and holy.” 1 Timothy 2:1,2 (VOICE)