My An Arkie's Faith column from the April 6, 2022, issue of The Polk County Pulse. 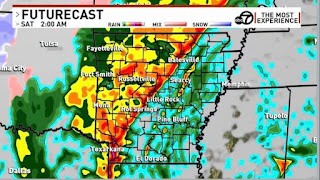 The weather alert blared on my phone as I ate my breakfast. A tornado warning was in effect for areas of Polk County. I pulled chairs into our downstairs hallway safe place, the only place in our house without exterior walls and windows. We sat in the hallway, watching the live feed from KATV. The path of the storms seemed to be heading right towards us. With the memories of experiencing two tornadoes in the back of our minds, tornado warnings are always a stressful time.

As the winds intensified, lightning flashed, and heavy rain began to fall, we could hear the tornado siren wailing in the distance. The storms were very fast-moving, and before long, they raced through Mena and pushed on to the northeast. We breathed a sigh of relief when the weatherman assured us that the storms had moved past us and we were in the clear. When the tornado warnings expired, I headed to work, arriving a few minutes late.

When I heard a crash that seemed to rattle the sheet metal on my shop building, my nerves were still a bit on edge from the morning's storms. "What could that be," I wondered. "Did a branch from a tree hit the shop?" I walked outside but couldn't see anything that could have caused the sound. A few minutes later, I heard it again. It sounded like a dull thud that rattled the tin siding. "That is very strange," I thought, but I was too busy to investigate. 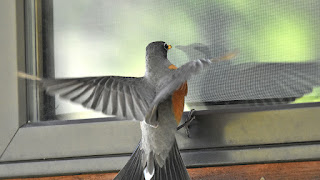 The mystery was solved when I walked past the shop window just as a robin crashed into it. The crash was so violent that I looked out the window to see if the robin was hurt, but he was sitting on a branch near the window. He would fly from the tree and crash into the window every so often.

When I researched the reason for the robin's behavior, I found that "the root of this behavior is territorial," according to the Mass Audubon website. "When birds select a nest site, the surrounding area becomes their territory, and they defend it vigorously. Bird territories vary in size depending on the bird species and available resources. A typical suburban songbird such as an American Robin needs only a small backyard. When a bird, searching for a nesting site, accidentally sees its image in a reflective surface on its territory, it mistakes it for a rival and tries to drive the "interloper" away. This activity may continue throughout the breeding season." 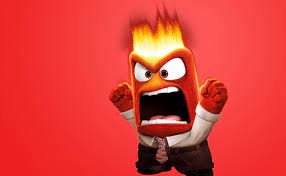 As I watched the robin battering the window day after day, I thought about my own experience and the times that I have attacked a phantom menace repeatedly. Anger and bitterness seem to make me irrational. I beat myself up by constantly crashing into the window of these emotions. It feels like my life is spinning out of control, and I can't make sense of it anymore. When I feel like I have been wronged, my feelings often intensify as I dwell on the situation. The more I think about it, the angrier I become. Bitterness begins to consume me if I can't get my feelings in check.

When I find myself crashing into the window of anger, bitterness, and hatred, I remember Paul's counsel found in Ephesians 4:26,27 (NIRV). "When you are angry, do not sin. Do not let the sun go down while you are still angry. Don't give the devil a chance." Some things make us angry. People mistreat us. We witness injustice in the world. But when we dwell on these things and hold a grudge, it gives the devil a foothold in our lives. When we continue to bash into the window of our anger, it can consume us, and if we can't control it, it will destroy us. Paul continues his counsel in Ephesians 4:31,32 (NIRV); "Get rid of all hard feelings, anger, and rage. Stop all fighting and lying. Don't have anything to do with any kind of hatred. Be kind and tender to one another. Forgive one another, just as God forgave you because of what Christ has done."

People hurt us, and life can be unfair. Sometimes anger is justified. But when we hang on to the anger and bitterness, it can be like repeatedly bashing our head against a window. God asks us to forgive to help us heal. But too often, we perceive forgiveness as condoning the behavior. Does forgiveness eliminate accountability or the need for restitution? If I have forgiven, can I still hold the person accountable for their actions? Some Christians teach that forgiveness and accountability are mutually exclusive. That holding someone responsible means that I haven't forgiven them. But that is not the message of the Bible. Even when God forgives us, there are still consequences. He still expects us to make things right as best we can. 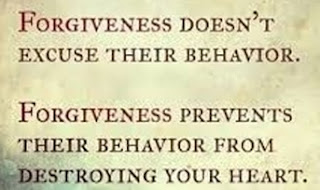 Forgiveness means you accept the wrongs against you, let go of those wrongs, calm your heart with God's love and patience, and begin again—with or without that person, it's up to you. You are no less of a person for knowing when you need distance from people who have broken you. You are not spiteful, hateful, bad, or evil for removing yourself from a toxic relationship and taking time to heal. You are not wrong for setting boundaries and leaving that person in your past.

Gentle Reader, "try to understand other people. Forgive each other. If you have something against someone, forgive him. That is the way the Lord forgave you." Colossians 3:13 (NLV) God wants us to let go of our anger and forgive. He doesn't want us to hold a grudge because he knows it is toxic. But he permits us to remove ourselves from unhealthy relationships and situations. Don't be like the robin and continually crash into the window of anger. "Walk away from the evil things in the world—just leave them behind, and do what is right, and always seek peace and pursue it." 1 Peter 3:11 (VOICE)