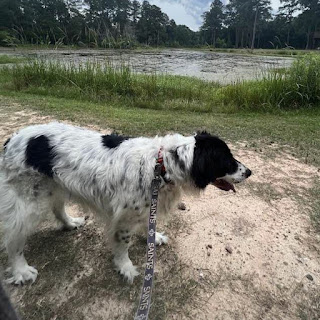 The weather outside was hot and muggy as I packed for my summer vacation. Bright and early the next morning, Daddy and I were driving to Dallas to catch a flight to Berlin, Germany. Earlier this year, Daddy had asked me if I would go on an overseas tour with him. He showed me a tour company brochure and told me to pick any tour I wanted. I chose a history tour of Germany. After months of waiting, it was finally time to go. When my suitcase was packed and I was sure that I had everything I needed, I was able to relax.

Before I left, the plants and flowers needed to be watered. When I went outside to water, the dogs went with me; my two dogs, Maggie and Tucker along with my granddaughters’ dog, Jake. Jake is a large, hairy, white dog with a black head and lots of black spots. His size and bark are intimidating, but he is a lovable, goofy, gentle dog who considers himself a house pet and spends as little time as possible outside. If he thinks there is the smallest chance of a raindrop, he refuses to go out. 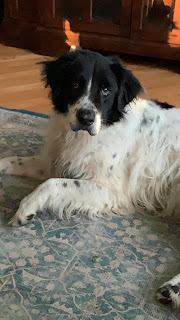 Jake was staying with us while his family vacationed in Colorado. In just a few hours they would be here to pick him up. As I started to water the plants, I could hear the rumbling of thunder in the distance. I said, “Jake isn’t going to like this.” Jake is extremely traumatized by storms and will find a place to hide when he hears thunder. A few raindrops began to fall, and I put my dogs in the house. But Jake wasn’t there. I walked around to the backyard looking for him, but he wasn’t there. I expected to find him at the back door wanting in the house. “Jake, here Jake, come on Jake,” I called. But he didn’t come. “Where can he be,” I wondered. 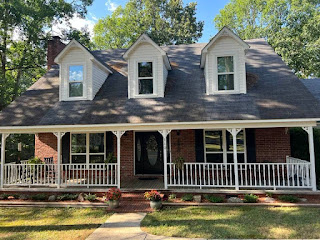 My wife and I looked through the house. Maybe he came back in the house. We looked in every room and in every closet and hiding place, but he was nowhere to be found. By this time the thunder was louder and there were streaks of lightning in the distance. I knew that Jake had a history of becoming frantic during storms and running from them. We knew that he wasn’t in the house and he wasn’t in our yard. I walked up and down the street calling for him, but he was nowhere to be found.

I started driving up and down the streets in our area. As I slowly drove past each house and looked in the yards, I wondered what people thought. I kept looking, slowly expanding the radius around our house, but there was no Jake. While I was driving the car and looking, my wife went to neighbors houses and was looking under decks and anyplace she imagined Jake could hide. When our neighbors learned that Jake was missing, they helped us look for him. Some were on foot and some were driving. The whole neighborhood was looking for Jake but with no success.

After searching for an hour, we took a few minutes to post on Facebook and ask for anyone who might have seen Jake to call us. There was one comment from someone who thought they might have seen him on Bethesda Road. I had searched that area several times, and I knew that the neighbors had looked there, but I drove back to look again. By now we had been searching for two hours and we began to give up hope. Where could Jake be? There continued to be occasional thunder and lightning, a now it was raining. A friend who lives a couple of mile from us saw our Facebook post and let me know that he was going to search the area between his house and Bethesda Road. We appreciated all the help that friends and neighbors were giving us, but it seemed we were no closer to finding Jake. 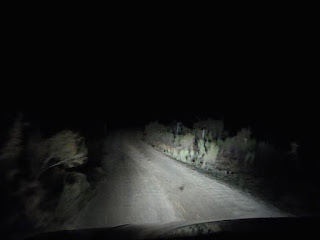 As night fell, we knew that it was pointless to continue the search. I continued to drive up and down each street between Hwy 71 and south Bethesda Road, but I didn’t see Jake. About the time I returned to the house with a heavy heart and a feeling of hopelessness, my friend who had been helping me search called and told me he had called the search on account of darkness. He held out hope by telling the story of a dog of his that was also afraid of thunderstorms. In a similar circumstance, his dog ran away during a storm and he couldn’t find her. When night fell and he had to give up the search, he turned on every light on his property. When the storm subsided, his dog found her way home. “Don’t give up hope,” he said.

That night when my granddaughters arrived, Jake was still missing. They and their Daddy searched for Jake, calling his name. But we had to call off the search and go to bed. When we got up in the morning, Jake still wasn’t home. We discussed options such as making fliers and notifying the police. There were sad faces and heavy hearts as we discussed what our options were. My wife was preparing breakfast when she let out a squeal as exclaimed, “it’s Jake!” There he was limping across the back yard. The back two thirds of his body was wet and dirty, and the pads of his feet were raw. When he walked into the house, Jake was immediately smothered with hugs of affection. The mood in the house changed in an instant. 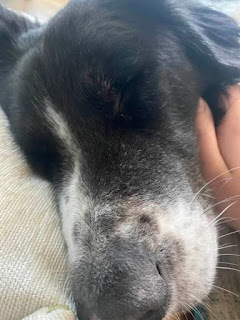 Are you looking for the lost? Are you celebrating and rejoicing when they are found? In Luke 19:10 (NRSV) Jesus says that He “came to seek out and to save the lost.” And the same Jesus who came to seek out and save, tells us in John 20:21 (NIV), “As the Father has sent me, I am sending you.” The focus of too many Christians is pointing out the sin in others. Daniel Darling states, "we must not allow our protest against values with which we disagree to overshadow our responsibility to show Christ's love for the world. It may very well be the person who offends us the most whom God is in the process of saving. And our gracious response might be the bridge that the Spirit uses to usher him from death to life.”

Gentle Reader, do you have compassion on those who are lost? Many people who claim to love God don’t have genuine love for other people. But 1 John 4:8 (NKJV) tells us, “He who does not love does not know God, for God is love.” I challenge you today to see the lost the way that Jesus sees them and to rejoice with Him whenever one of his lost sheep comes home!

Posted by Richard Lawry at 5:10 PM