My An Arkie's Faith column from the July 6, 2022, issue of The Polk County Pulse. 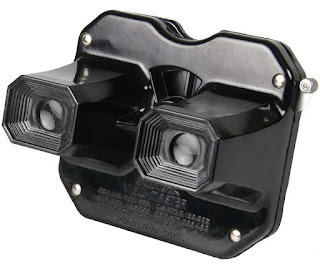 There are many things that I remember about visiting my grandparents. There was the old antique farmhouse cupboard where they kept the flour in a large bin. I wanted my drink in the plastic insulated glasses with the photos on them. On the breakfast table, there was always a box of Apple Jacks. We never had sugary cereals at home, so eating Apple Jacks at Grandma's house was a treat.

One of my favorite things at Grandma's house was looking at her View-Master. We had to ask to play with the View-Master, and my stern grandfather always reminded us that it was not a toy. "You be careful with that," he would say. And when we finished, even if we had carefully put each reel in its sleeve, he would bellow, "make sure you have put everything away properly!" But when we got out the View-Master and the many reels with it, it always transported me to other places in the world. I had to share it with my sister, but I wasn't very good at it. I wanted to see what was next, and I didn't want to wait for her to have a turn. 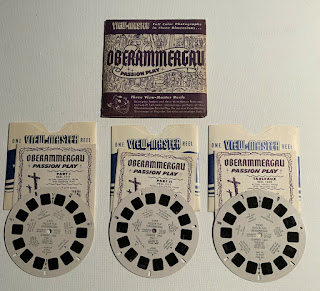 My sister and I would look at beautiful nature scenes we couldn't imagine seeing in real life. I remember the View-Master reels of Butchart Gardens in Victoria. There were reels from Cyprus Gardens in Florida and Sun Valley in Idaho. But the reels I repeatedly returned to were of the Passion Play in Oberammergau, Germany. I was intrigued by the Bible scenes and fascinated by the fact that they were from far away Germany.

Earlier this year, my Daddy asked me if I would take an overseas trip with him. We booked a tour with Tabgha Tours that focused on the history of Martin Luther and WWII. When I looked at the itinerary, I saw that we would see the famous Pergamon Museum in Berlin, visit Martin Luther's home and the church where he nailed his 95 theses to the door in Wittenberg, and spend the weekend at the monastery where Luther became a monk and priest. Then we would visit the Nazi rally grounds where Hitler spoke in Nuremberg and the Dachau Concentration Camp outside Munich. 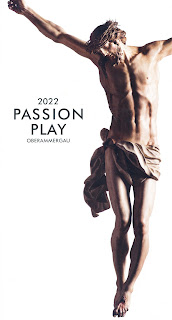 It was the next item on the itinerary that grabbed my attention. “Depart for Oberammergau. World-renowned, this quaint Bavarian town is the site of the extravagant Oberammergau Passion Play – performed only once every ten years. Take part in this once-in-a-lifetime experience." My mind drifted back to a little boy looking at amazing 3-D photos of the passion play on his grandparents' View-Master. With disbelief, I realized the little boy looking at the View-Master reel of the Passion Play in Oberammergau would be attending almost sixty years later.

While in Oberammergau, I learned about the origins of the Passion Play. In 1633, the plague was raging in Europe, including in the town of Oberammergau. The local people vowed: If the dying stops, every ten years, we will stage the "play of the passion, death, and resurrection of our Lord Jesus Christ." No one died of the plague from that day on. Since then, the people of Oberammergau have been performing the Passion of Jesus Christ every ten years. For 200 years, the play was staged in the cemetery near the church. In the 19th century, when more and more people started coming from all over the world to see the play, it was moved to the current location. This year there will be 103 performances with over 5,000 people at each performance. 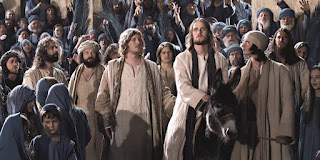 The production involves over 2,000 performers, musicians, and stage technicians, all residents of Oberammergau. This is a large percentage of the village's 5500 residents. There are only 124 speaking roles, but up to 1,000 people appear on the stage at one time. There are 64 vocalists and 55 instrumentalists. To be a performer in the Passion Play, you must either have been born in Oberammergau, married to a local for ten or more years or lived there personally for 20 years. There are no exceptions to these rules.

Even though the play was in German, and I only knew a few words, the story still came through. As I watched, the words found in Isaiah 53:11,12 (NCV) came to mind. "After his soul suffers many things, he will see life and be satisfied. My good servant will make many people right with God; he will carry away their sins. For this reason I will make him a great man among people, and he will share in all things with those who are strong. He willingly gave his life and was treated like a criminal. But he carried away the sins of many people and asked forgiveness for those who sinned." 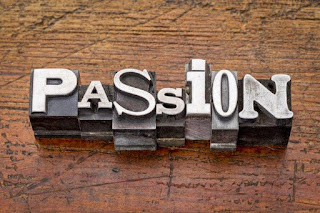 Have you ever wondered why we refer to a play about the final week in the life of Jesus as a passion play? You may have never thought about it, but I have a curious mind and needed to know. I looked the word passion up in the dictionary and found the following meanings. "1. Extreme compelling emotion. 2. Object of any strong desire or fondness. 3. Any one of the emotions: hate, grief, love, fear, joy. 4. The suffering of Jesus."

I studied the origin of the word passion and found that in approximately 1175, this word was adopted from Old French to Old English and meant the sufferings of Christ on the Cross. The word passion picked up romantic connotations in the late Middle English period. During the 16th century, the word passion described a fit or outburst of anger or rage. By the mid-17th century, passion had expanded its meaning again by describing anything pursued with extreme enthusiasm.