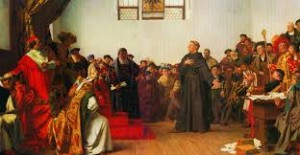 It was a spring day in 1521, and Martin was on his way home from the city of Worms. He had been on trial before a council of religious and political leaders for his religious beliefs. In January, the church excommunicated Martin because his writing and teaching contradicted the church leaders.

A new emperor, Charles V, had ascended the throne of The Holy Roman Empire, and the church pressed him to punish Martin. Frederick the Wise, who was instrumental in Charles gaining the throne, asked him not to sentence Martin before granting him a hearing. The emperor was between a rock and a hard place. The church wanted an imperial edict sentencing Martin to death. But, according to Jean-Henri Merle d'Aubigné’s book, The History of the Reformation, Frederick the Wise "declared firmly that 'neither his imperial majesty nor any other person had shown that Luther's writings had been refuted;' therefore he requested 'that Dr. Luther should be furnished with a safe-conduct, so that he might appear before a tribunal of learned, pious, and impartial judges.'" 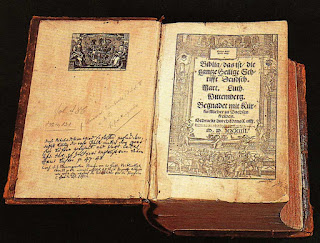 In his trial before the tribunal, the prosecutor asked Martin to renounce his writings. Martin answered that he would need a day to consider the matter and give a complete answer. The next day Martin reappeared before the tribunal. He reported that before giving his answer, he had prayed for long hours. He stated that his conscience was captive to God's Word and that relying on anything other than the Bible as an ultimate source of authority was impossible.

Martin  was given one last chance to recant and was told, "If you do not retract, the emperor and the states of the empire will consult what course to adopt against an incorrigible heretic." Martin said, "unless therefore I am convinced by the testimony of Scripture or by the clearest reasoning, unless I am persuaded by means of the passages I have quoted, and unless they thus render my conscience bound by the word of God, I cannot and I will not retract, for it is unsafe for a Christian to speak against his conscience. Here I stand, I can do no other; may God help me. Amen." - Jean-Henri Merle d'Aubigné

As a result of Martin's trial, The Emperor issued a decree that allowed anyone to kill Martin without any repercussions from the authorities. Because of a prior agreement to get Martin to appear before the tribunal, he had a guarantee from The Emperor of safe passage home. But Martin's friends didn't believe the agreement would be honored given the trial's outcome. They hatched a daring plan to keep Martin safe. It would take cunning and secrecy to carry it out. 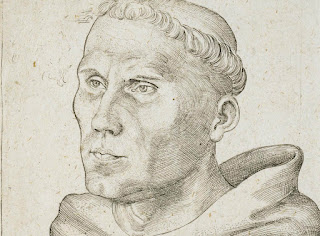 While Martin was on his way home from Worms to Wittenberg on May 4, 1521, he was captured by four armed bandits. Frederick the Wise had arranged for Martin to be seized on his way by a company of masked horsemen. He gave the men careful instructions to keep Martin safe but to tell no one where they were taking him, not even Frederick. The ruse allowed Frederick to escape charges of harboring a heretic and outlaw.

Martin was tossed to the bottom of the wagon and covered with a blanket. The bandits drove him through the dense forest to Wartburg Castle, an isolated mountain fortress perched 1200 feet above the city of Eisenach. There he lived incognito, replacing his usual monk's habit with a black robe with a high collar. He let his hair and beard grow out to complete his disguise. He carried a sword and used the name Junker Jörg, "Knight George." Only one man in the Castle knew who he was because Martin needed his identity to be kept secret from other knights who lived there. 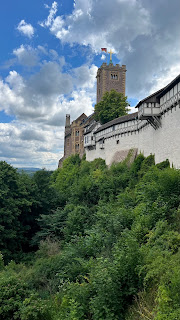 Martin's seizure and concealment were so involved in mystery that even Frederick himself did not know where Martin was for a long time. His ignorance was by design. If Frederick knew nothing of Martin's whereabouts, he could reveal nothing. He satisfied himself knowing that Martin was safe and was content with this knowledge.

As I was touring Wartburg Castle, the tour guide pointed out a painting on the wall. There a man in a black robe seemed to look my way. His hair was dark, with curls on his forehead. A trim mustache accentuated a full bushy beard. As I studied the painting of Junker Jörg, "Knight George," the tour guide told the thrilling story of Martin's contentious appearance before the Diet of Worms and the sentence that amounted to a death sentence. Anyone could kill Martin without any repercussions from the authorities. He told the story of the kidnapping on the highway. We learned that this man, known as Knight George, translated the entire New Testament of The Bible into German while he was in hiding. 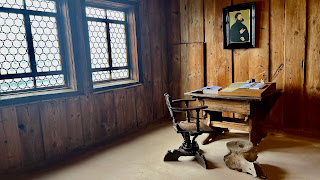 Knight George, aka Martin Luther, was a champion of the Bible. He believed that every Christian should read the Bible for himself and was able, with God's help to understand the truths it contained. He wrote, "We must make a great difference between God's Word and the word of man. A man's word is a little sound, that flies into the air, and soon vanishes; but the Word of God is greater than heaven and earth, yea, greater that death and hell, for it forms part of the power of God, and endures everlastingly." He often quoted the words of Jesus found in Matthew 11:25 (AMP). "I praise You, Father, Lord of heaven and earth [I openly and joyfully acknowledge Your great wisdom], that You have hidden these things [these spiritual truths] from the wise and intelligent and revealed them to infants [to new believers, to those seeking God's will and purpose]."

Gentle Reader, I want to leave you with these words penned by Knight George. "We cannot attain to the understanding of Scripture either by study or by the intellect. Your first duty is to begin by prayer. Entreat the Lord to grant you, of His great mercy, the true understanding of His Word. There is no other interpreter of the Word of God than the Author of this Word, as He Himself has said, "They will all be taught by God" John 6:45 (NCV). Hope for nothing from your own labors, from your own understanding: trust solely in God, and in the influence of His Spirit. Believe this on the word of a man who has experience."