My An Arkie's Faith column from the November 23, 2022, issue of The Polk County Pulse.

Thanksgiving is fast approaching, and I am getting excited. We will be heading to Ashland, Missouri, on Thursday morning to celebrate Thanksgiving with my sister and her family. Thanksgiving is such a fantastic holiday. To me, Thanksgiving is a holiday that focuses on family even more than Christmas. I am very thankful for my family.

How we celebrate Thanksgiving in America has its roots in British harvest festivals and U.S. history. In 1620, a group of more than 100 Puritans fleeing religious persecution settled in a town called Plymouth in what is now Massachusetts. The Pilgrims' first winter was so harsh that fewer than 50 survived the season.

The following spring, Native Americans taught them how to get sap from the maple trees and plant corn and other crops. The harvest was successful, and the Pilgrims had enough food for the winter. Plymouth Colony's Governor, William Bradford, decided to throw a harvest festival and invited the colony's native neighbors to take part. 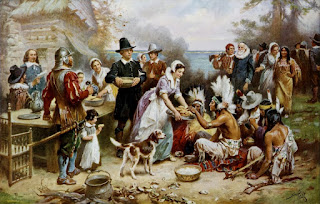 Historians believe this celebration occurred sometime in the fall, though there are few clues to reconstruct the feast. What we know about it comes from a letter Edward Winslow wrote to a friend in England: "Our harvest being gotten in, our governor sent four men fowling, that we might rejoice together after we had gathered the fruit of our labors. They, in one day, killed as much fowl as served the company almost a week. At which time, with many of the Indians coming among us, for three days, we entertained and feasted; and they went out and killed five deer, which they brought to the plantation, and bestowed on our governor."

The harvest in 1622 was a poor one for the Pilgrims in Plymouth. The following summer, they were running out of food. The outlook was grim as they were waiting for the fall harvest. The weather was hot and dry, and the crops were failing. The Pilgrims lived on a few grains of corn for days at a time. Their hopes rested on a good fall harvest. But a drought began in June, and they watched as the crops turned brown and slowly withered away. The Pilgrims turned to the only hope they had. They appointed a solemn day of prayer to ask God to intervene. 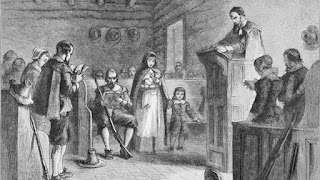 The Pilgrims assembled one July morning under a hot, clear sky and prayed for nine hours. God answered their prayers the following day. Edward Winslow wrote, "For the next two weeks distilled such soft, sweet, and moderate showers that it was hard to say whether our withered corn or drooping affections were most quickened and revived."

Later that year, the governor of the colony, William Bradford, issued a proclamation. "Inasmuch as the great Father has given us this year an abundant harvest, has spared us from pestilence and disease, and has granted us freedom to worship God according to the dictates of our own conscience. Now I, your magistrate, do proclaim that all ye Pilgrims, do gather at ye meeting house, on Thursday, November 29th, there to listen to ye pastor and render thanksgiving to ye Almighty God for all His blessings." 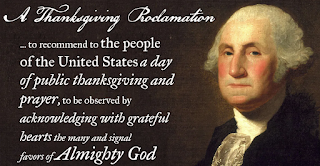 For the Christian, Thanksgiving shouldn't be a day; it should be a lifestyle. In Philippians 4:4-6 (NET), Paul wrote, "Rejoice in the Lord always. Again I say, rejoice! Let everyone see your gentleness. The Lord is near! Do not be anxious about anything. Instead, in every situation, through prayer and petition with thanksgiving, tell your requests to God." He added in Colossians 3:17 (ESV), "whatever you do, in word or deed, do everything in the name of the Lord Jesus, giving thanks to God the Father through him."

The Greek word, translated in the Bible as thanksgiving, is "eucharistia." The English spelling is eucharist. One of the definitions in my dictionary is "the giving of thanks; thanksgiving." The root word in "eucharistia" is "charis." Charis is translated into English as grace. That makes sense. What happens at the beginning of your Thanksgiving meal? Someone says "grace." Saying grace is giving thanks. 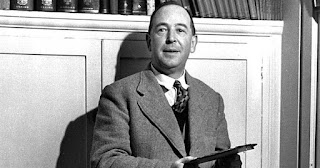 At a British conference on religions, experts from around the globe debated what, if any, belief was unique to the Christian faith. They began eliminating possibilities. Incarnation? Other religions had different versions of gods appearing in human form. Resurrection? Again, other religions had accounts of return from death. The debate went on for some time until C.S. Lewis wandered into the room. "What's the rumpus about?" he asked and heard in reply that his colleagues were discussing Christianity's unique contribution among world religions. Lewis responded, "Oh, that's easy. It's grace."

After some discussion, the conferees had to agree. The notion of God's love coming to us free of charge, no strings attached, is singularly Christian. Of all the world's religions, only Christianity dares to make God's love unconditional. "For God saved us and called us to live a holy life. He did this, not because we deserved it, but because that was his plan from before the beginning of time—to show us his grace through Christ Jesus." 2 Timothy 1:9 (NLT)

Gentle Reader, Paul tells us in 2 Corinthians 4:15 (NET), "For all these things are for your sake, so that the grace that is including more and more people may cause thanksgiving to increase to the glory of God." What causes Thanksgiving in God's people? It is grace! I am so thankful for God's grace and the gift of His Son that makes grace possible. When you celebrate Thanksgiving, be sure to give thanks to God for grace.