My article from the August 26, 2015 issue of The Polk County Pulse

Local woman, Betty Sobeski , 67, ran the Pike’s Peak Ascent which took place in Manitou Springs, Colorado on August 15, 2015.  The Pikes Peak Ascent is a racing event that begins at the base of Pike’s Peak, in Manitou Springs, Colorado, and over the course of 13.3 miles climbs over 7,815 feet to the top of the 14,115 foot peak.  Runners consider the Pike’s Peak races America’s ultimate challenge.  Eighteen hundred runners from all over the U.S and from as far away as Japan participated in the 2015 event. 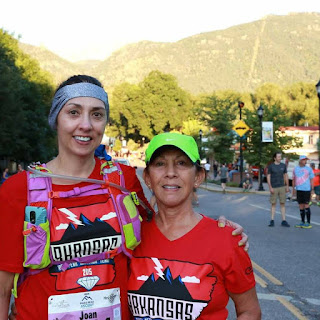 Betty completed the Ascent along with her daughter, Joan Rendon, 50, of Waldron, Arkansas.  They trained together for six months.  They did all of their training on Rich Mountain, simulating the steep Pike’s Peak course.  Due to the heat they trained with very early morning runs.  Betty has been running for 25 years and Joan has been running for the last 10 years.

2015 was the first time that Joan ran the Pike’s Peak Ascent.  Betty had previously run the Pike’s Peak Marathon five times from 2001 to 2007. In 2003 she brought home a trophy for placing second in her age class, just two minutes short of first place.  The marathon course is to the top of Pike’s Peak and back down again.

Posted by Richard Lawry at 3:53 PM