I Want To Be A Shepherd 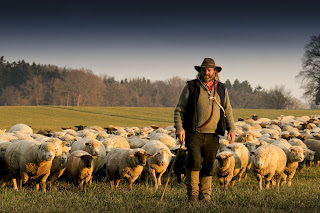 I want to be a shepherd. No, I don’t want to live alone with a herd of sheep, but I want to experience what the shepherds in the Christmas story felt. God could have chosen to announce the arrival of Jesus on planet earth to anyone. But instead of asking angels to visit some of the most important people on earth, God sent the angels to speak to humble shepherds.

The shepherds were watching their flocks while the sheep rested or grazed on grass from the hillsides. They were prepared to deal with any danger that threatened their animals, but they were frightened by the angels' appearance. That’s why the angels told them, “don’t be afraid.”

The fields around Bethlehem would have been very dark. Suddenly a bright light filled the darkness, as the sky above Bethlehem filled with a multitude of angels. The angels calmly reassured the frightened shepherds that they had good news for them. 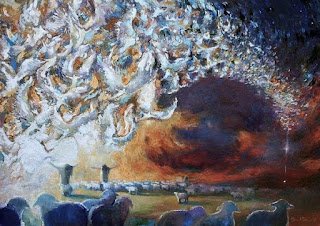 The announcement of the birth of Jesus was marked by the light of many angels appearing in their heavenly glory.  As amazing as that experience must have been, that’s not the part of the experience that intrigues me the most. It is what happened next.

The Bible tells the story in Luke 2:15-18: "When the angels had left them and gone into heaven, the shepherds said to one another, “Let’s go to Bethlehem and see this thing that has happened, which the Lord has told us about.” They rushed into town and found the baby. When they had seen baby Jesus, they told everyone they could about the baby and what the angels had told them. Everyone they talked to was amazed by the story that the shepherds told them. 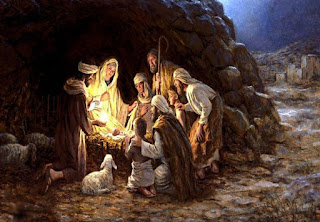 I can only imagine what it must have been like to be one of the first people to see the baby Jesus!  I can just feel the excitement the shepherds felt. They just had to tell people of their experience. Can you imagine being a part of those conversations! Even in the days before media such as television and the internet, word traveled fast that something amazing was happening.

Even though I will never be a shepherd or experience the things that the humble shepherds of Bethlehem experienced on that first Christmas, I can follow their example. I can spread the word about the baby Jesus. I can be excited about Jesus and what he means to this world. And so can you. That is what Christmas is all about. Let’s all be shepherds!

Posted by Richard Lawry at 9:14 AM