My An Arkie's Faith column from the December 14, 2016, issue of The Mena Star 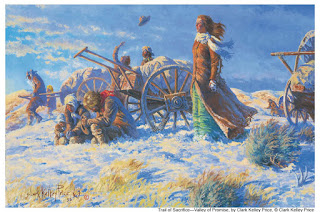 A few years ago my wife started doing some genealogy research. Early on in her research, she ran across the fascinating story of her great-great-grandmother, Sophie. Sophie Cathrine Wilhelmine Klauen Petersen and her children emigrated from Denmark in 1856. She traveled from Denmark to England where she sailed from Liverpool to New York City. From New York, she traveled by train to Iowa City, Iowa where she became a part of the Willie Handcart Company.

1n 1856, over nineteen hundred European immigrants signed up to make the thousand-mile journey from Iowa City to Salt Lake City pulling handcarts. They were organized into companies, with Sophie and her children becoming a part of the Willie Handcart Company. Although Sophie and her children arrived safely in Salt Lake City, over sixty members of the Willie Handcart Company died on the trail. 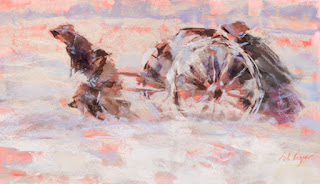 My wife has been very interested in the details of this story and has done a lot of research. As these pioneers pulled handcarts across the plains and the Rocky Mountains they faced starvation, hypothermia, frozen limbs and death. Jens Nielsen of the Willie Handcart Company wrote, “No person can describe it, nor could it be comprehended or understood by any human living in this life, but those who were called to pass through it.” 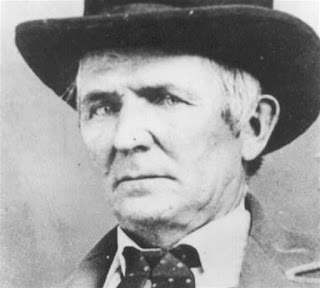 While she was researching her family tree, my wife found that some of her ancestors were very interesting historical figures including Alfred the Great and Charlemagne. Along with royalty she also found some less savory ancestors. One relative that she found in her research was John D. Lee. He was infamous because of his involvement in the Mountain Meadows Massacre that took place in Utah on September 11, 1857.  On that day, Native Americans and members of the Mormon church attacked a wagon train and slaughtered 120 people including women and children. The Mormon Church turned John D. Lee over to the Federal authorities as a scapegoat. He was the only person convicted out of the estimated 50 to 70 Mormon participants and was executed for his crimes.

I’m sure that all of us have some bad ancestors. Some people are ashamed of the actions of their ancestors and think that it reflects badly on them. If the thought of unsavory ancestors bothers you, you probably should not attempt genealogy. I do not know of anyone doing genealogy that has not uncovered something from the past they are not proud of. I'm sure glad I'm not responsible for anything my ancestors did. 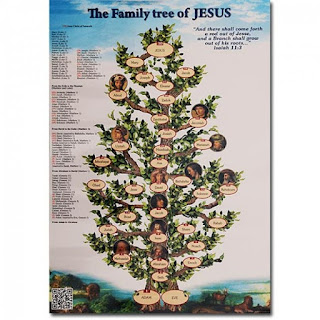 In Matthew 1:1-17, we find the genealogy of Jesus. Whenever I find genealogies in the Bible, I usually skip over them to read something more interesting. But recently as I was reading the Christmas story I started with Matthew 1 and read from the beginning. I wondered why Matthew started his gospel with a boring genealogy. As I read, I noticed something unusual. Matthew included four women.

If you read all of the other genealogies in the Bible or from any literature from the time, none of them include women. Matthew not only included women in the genealogy but women with poor reputations.

In Matthew 1:3 we find Tamar listed as an ancestor of Jesus. Tamar was a widow who disguised herself as a prostitute to trick her father-in-law into getting her pregnant and bore a child named Perez. A disturbing story introduces an illegitimate Perez into the lineage of Jesus.

In Matthew 1:5, Rahab, a prostitute, is listed in the genealogy. She is not an Israelite, but a heathen Canaanite. She bore a son named Boaz. The wife of Boaz, the Moabite woman Ruth,  is specifically mentioned as an ancestor of Jesus. The fourth woman listed is Bathsheba, with whom King David had an adulterous affair that resulted in the birth of King Solomon.

Matthew decided to open his gospel by saying that Jesus descended from the incest of Tamar, the prostitution of Rahab, the Moabite Ruth, and the adultery of Bathsheba. Why would he begin his book this way? It shows that Jesus was one of us. He was human. John 1:14 (NKJV) tells us that He, “became flesh and dwelt among us.” But all of the moral failures of the ancestors of Jesus did not stop Him from achieving His purpose. Jesus, just like each one of us, had unsavory ancestors. But Hebrews 4:15 (NCV) tells us, “For our High Priest is able to understand our weaknesses. He was tempted in every way that we are, but he did not sin.”

Gentle Reader, the message of Christmas is that God is love. “For God so loved the world that He gave His only begotten Son, that whoever believes in Him should not perish but have everlasting life.” John 3:16 (NKJV) No matter what is in your past, no one is beyond redemption. Matthew 1:21 (NKJV) gives us the focal point of the Christmas story; “she will bring forth a Son, and you shall call His name Jesus, for He will save His people from their sins.” Jesus did not give up on the world but chose to enter into this turbulent human experience as a baby in order to reconcile the world to himself. That is what Christmas is all about, and that is good news.

Posted by Richard Lawry at 6:35 AM