At a recent cousins reunion I was given a copy of this story that was written by Ivan Reeve about my Uncle Delbert. 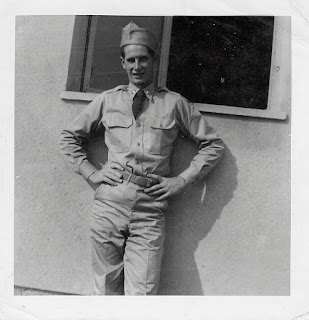 I REMEMBER DELBERT
by Ivan Reeve

For as long as I can recall, I remember Delbert. He was certainly a "best friend cousin" that everyone should be blessed with.

We were nourished together, first in the "home church," at the Cowan's home, then in Neodesha, Kansas, at the Adventist Church. It certainly was an incentive to go to church; one, because we'd get to see all our cousins; two, we didn't have to work that day; and three, we could check out all the girls!

Family gatherings were especially fun. Since we were close in age, we hung around together. One of the highlights of our youth was we attended the same school, Star School.

For awhile, Uncle Ben owned and farmed 20 acres of our home place, which gave Delbert and I a chance to work and play together. For some time, he and his family moved to Missouri, then to Michigan, following the fruit harvest. It seemed like an eternity before we saw each other again. Eventually they bought acreage a few miles from our place. We really enjoyed sleepovers at each other's home.

Before we knew it, we were old enough to go to Enterprise Academy in Kansas, where we roomed together. Our working hours differed somewhat, causing us to have to purchase an alarm clock to keep us on our schedules. The clock was especially bothersome to Delbert. The constant ticking finally caused Delbert to stab the clock with his compasses, thus contributing to the demise of the pesky clock.

Since we were farm boys, we applied for work and got jobs at the academy farm. It turned out to be v-e-r-y l-o-n-g work days as well as a long, hot summer.

Sometime in August we decided to relocate ourselves to the state of Oregon. Being responsible teenagers, we drew out some of our wages, which together amounted to about $35.00 and promptly spent $25.00 for a portable Wards Airline Radio. That left us $10 for expenses and relocation costs.

On our hitchhiking trek, we were fortunate to be picked up by a long distance trucker that took us as far as Denver, Colorado. Opal, Delbert's sister, and Lillian Spady were residing in Boulder. They were gracious enough to feed us and give us a place to sleep.

Shortly thereafter, we continued on our way to Oregon. Wyoming greeted us with an unexpected snow storm. This caused us to put on nearly all our clothing that we had with us just to keep warm, which gave a whole new meaning to "layering."

In Wyoming, in a fortuitous turn of events, we were picked up by a congenial guy that was driving a snazzy car that went like the wind. The gentleman was happy to have Delbert share in the driving, which suited Delbert just fine. In no time, we were well on our way to our destination.

For Kansas kids that hardly ever saw anything higher than an ant hill, the spectacular Columbia River Gorge was like seeing the Garden of Eden. The waterfalls. the greenery, the majestic firs, the cool breeze, and the warm sun tantalized us.

It was dusk when we arrived in Portland. We were not broke; we still had 3 cents between the two of us. We decided to splurge on a gumball apiece to convince ourselves that we weren't hungry!

Fortune smiled upon us again when a prosperous Caterpillar salesman gave us a lift towards our final destination, which was Tillamook. Oregon. He generously shared his recent wealth with us by treating us to a steak dinner and paying for a night's lodging.

By the end of the first day'in Tillamook, we each had found a job; Delbert at a grocery market and I at the Bungalow Cafe "diving for pearls," a glorified way of stating that l was a dishwasher.

Thanks to my sister, Viola, we had a roof over our heads for a couple weeks with a generous family that lived on the outskirts of Tillamook. Whether it was because of our boisterous spirit or truly the rains that were anticipated, they advised us to move into town so we wouldn't have to walk to work every day.

Bertha, a sister to Delbert's boss, ran a boarding house. She had a vacancy and rented us a room for which we were grateful. Everything went well until we smuggled in a washing machine, which was prohibited. Viola rescued us again, by taking the washing machine off our hands.

After high school. our paths went different ways, including Delbert's service in the Army and I in the Navy. We saw each other from time to time and kept tabs on each other through the family grapevine.

Delbert, you were always special to me. My memories of you will forever warm the cockles of my heart.