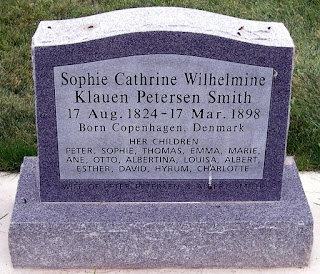 When my wife started doing some genealogy research she ran across a fascinating story.  It is the story of her great-great-grandmother, Sophie.

Sophia Klauen was born in Copenhagen, Denmark on August 17th, 1824. When she was a young girl she married Peter Peterson.  In 1853 he died of a contagious disease.  Some time after his death, Mormon missionaries from America studied with her.  One thing that they focused on was the faithful gathering in Zion. To them, Zion was the new Mormon settlement in Salt Lake City, Utah.

Sophie was baptized on December 27, 1855, and later sold her homestead in preparation to go to America.  She trusted two Elders with the money from the sale of her farm but it was never returned to her.  On May 4, 1856, Sophie and her children sailed from Liverpool, England on the ship Thornton. 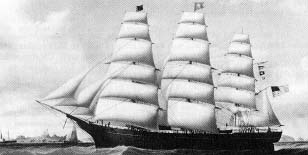 On the voyage across the Atlantic, her eight-year-old son Thomas fell from the upper deck and was killed.  He was buried at sea.  Still she was determined to go to Salt Lake City and she never lost faith. She believed the Lord would help her reach her destination.

After arriving in New York, she along with hundreds of other converts from Denmark and England traveled by train to Chicago and then to Iowa City which was as far west as the train went in 1856.

There she became a part of the Willie Handcart Company.  Prior to 1856, pioneers traveled to Utah in heavy, expensive wagons.  To save money, Brigham Young came up with the idea of Handcarts that could be pulled by humans rather than animals. The plan was to bring as many people as possible, for as small an amount of money as possible.

Over nineteen hundred European converts signed up to cross the Plains with handcarts in 1856.  The handcarts were designed to serve four or five persons each.  At Iowa City, the emigrants were organized into companies of about 100 handcarts each.  Each adult was allowed only 17 pounds of personal belongings.

Sophie and the rest of the Willie Company left Iowa City in August 1856.  There were over 400 people in the company pulling 100 handcarts with 5 support wagons.  From Iowa to Missouri the roads were good and the game was plentiful.

When the Martin Company arrived at Florence, Nebraska a council was held, and they decided to press on, though there were those who advised against it because they felt it was too late in the summer to begin the journey. Three hundred miles later, a herd of buffalo stampeded the Willie Company's oxen and cattle, so the provisions from the stranded wagons were moved to handcarts and much of their possession had to be left behind.

The plans were to replenish their provisions when they reached Fort Laramie in Wyoming, but the Fort either had no food to spare or wouldn't sell it to the Mormon immigrants.  The people lived on mostly flour that was rationed out daily.  The portion of flour for each man was cut from 16 ounces to 10 ounces when they were not able to get provisions at Fort Laramie.

The strenuous work of pulling the handcarts on short rations caused much suffering and a number of deaths.  When a harsh winter storm arrived on October 19, 1856, the exhausted pioneers faced starvation, hypothermia, frozen limbs, and death. Deep snow then made it impossible for them to move forward. On October 20th, the group was completely out of food. They did not have adequate clothing and blankets to keep warm.  Their situation was desperate and it looked like everyone would be lost. 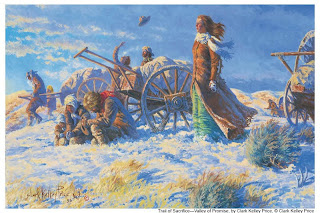 In early September, Franklin D. Richards, returning from Europe where he had served as the Church's mission president, passed the Willie handcart company as he was traveling to Salt Lake City. Richards and the 12 returning missionaries who accompanied him were in carriages and light wagons pulled by horses that were able to travel much faster than the handcarts.

On October 4 the Richards party reached Salt Lake City and told the church leaders of the dire circumstances of the handcart company. The next morning the Church was meeting in a general conference, where Young and the other speakers called on the Church members to provide wagons, mules, supplies, and teamsters for a rescue mission. On the morning of October 7, the first rescue party left Salt Lake City with 16 wagon-loads of food and supplies.  Throughout October, more wagon trains were assembled, and by the end of the month 250 relief wagons were on the road.

On October 21st, the first relief wagons reached the starving company. Although 68 of the 404 emigrants died on the way to Salt Lake City, the losses would have been much greater if the relief wagons had not reached them when they did. 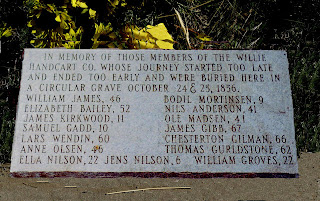 Jens Nielsen of the Willie Handcart Company wrote, “No person can describe it, nor could it be comprehended or understood by any human living in this life, but those who were called to pass through it.

Sophie Peterson and her children all made it to Salt Lake City. Through all of the hardships and disappointments she endured, she never lost sight of her goal.  She lost all of her money.  Her son died on the voyage to America.  She endured extreme hardship and hunger on the handcart journey.   Most of the few belongings she was allowed to take on the journey had to be left on the trail when the carts had to be used to haul provisions.

Sophie's granddaughter Mary Smith Westover wrote about her grandmother; "Grandmother and her family were sent to Manti. She knew no one there. Albert Smith who later became my grandfather took Sophie and her children and gave them a place to stay.

Grandmother was good to grandfather's children by his first wife. Sophie was the mother of 14 children. My father was named after his father and was the 3rd child of this marriage. He was an only son as two sons died while in their infancy. Grandfather also died before she did, but he left her well provided for with a nice home.

Grandmother lived a wonderful life and was always ready to help others. Her road of life wasn't strewn with roses but she never complained. When she passed away she was laid to rest by her husband's side in Manti Cemetery. Her children and children's children should live lives worthy of such a mother and grandmother."

I have to agree with Sophie's granddaughter, Mary Smith Westover, Sophie lived an amazing life.