My An Arkie's Faith column from the November 30, 2016, issue of The Mena Star 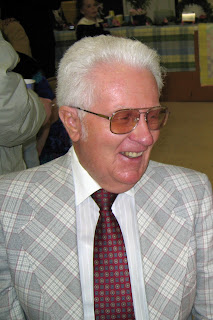 My friend, Lou, passed away early Monday morning, November 14. We attended the same church together for over 25 years. We both had a passion for missions. My favorite memories of Lou are from a mission trip that we made to Belize.

In 2003 Don and Minnie Johnson moved to Cove, Arkansas and started attending our church. They had spent a year living in Belize. They were passionate about the people of Belize and suggested that our church get involved there. 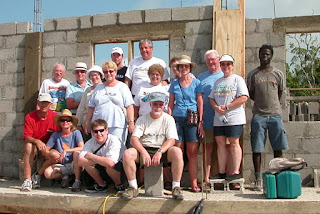 The members of the church liked the idea and after much planning, money-raising and preparation, it culminated in a mission trip to Belize in early 2004 and the building of a church in San Pedro. My wife and I, my son, my parents, and Lou were among the seventeen members of our church that made the trip to Belize.

After one week, our group had to return home, but we left with the walls of the new church in San Pedro completed. We left the building project in the hands of the local congregation, but we wondered if the church would ever be completed. 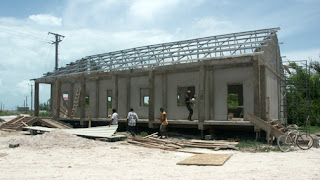 During the following months, the church members in San Pedro did finish the church building. Plans were made for a church dedication service to be held in February 2005. I was invited to come to the dedication service. I wanted to go. The church building project had been very important to me, and I had made many friends in San Pedro that I wanted to see again. There was just one problem. I couldn’t afford the trip.

One day I received a letter in the mail from Fare Finders Travel. Why were they sending me a letter? When I opened the letter, I was surprised by what it said. Please come to Fare Finders to make arrangements for a round trip ticket to Belize. Someone has paid for the ticket, but they want to remain anonymous. I couldn’t believe it. My wife immediately tried to figure out who the anonymous donor was. She still hasn’t cracked the case. It is still a mystery. The mysterious ticket has to be one of the best gifts I have ever received. 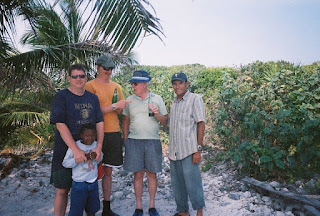 Lou and his son made the trip with us back to Belize. Lou’s son is a diver, and San Pedro Belize is a great place to dive the Belize Barrier Reef, the largest barrier reef in the western hemisphere. We had a great time vacationing together. We rented bicycles to get around the island. Lou was in his eighties, but I was amazed by his stamina as we rode our bikes everywhere we needed to go. At the end of the trip, Lou said, “he never wanted to ride a bike again!” 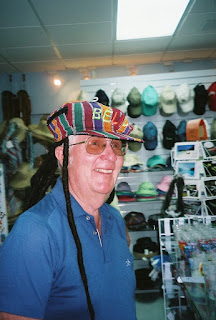 It is hard to say goodbye to friends and family. But I am sure that one day before long Lou and I will be reunited. He passionately believed that Jesus was returning soon. It was the focus of his life.  I find comfort in the words that Paul wrote in 1 Thessalonians 4:13-18 (NKJV), “But I do not want you to be ignorant, brethren, concerning those who have fallen asleep, lest you sorrow as others who have no hope. For if we believe that Jesus died and rose again, even so God will bring with Him those who sleep in Jesus. For this we say to you by the word of the Lord, that we who are alive and remain until the coming of the Lord will by no means precede those who are asleep. For the Lord Himself will descend from heaven with a shout, with the voice of an archangel, and with the trumpet of God. And the dead in Christ will rise first. Then we who are alive and remain shall be caught up together with them in the clouds to meet the Lord in the air. And thus we shall always be with the Lord. Therefore comfort one another with these words.” 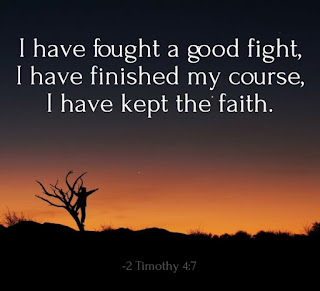 I’m comforted by the fact that Lou has fallen asleep. He is resting peacefully. He is no longer fighting the daily battles of life. Paul’s words in 2 Timothy 4:7 (NLT) could be Lou’s words. “I have fought the good fight, I have finished the race, and I have remained faithful.” I’m comforted by the fact that God has promised that if we believe that Jesus died and rose again, we can be sure that those who sleep in Jesus will live again. When the Lord Himself descends from heaven with a shout, with the voice of an archangel, and with the trumpet of God, the dead in Christ will rise again.

Gentle Reader, if you have experienced the loss of a friend or family member, remember that God does not want you to be ignorant “concerning those who have fallen asleep, lest you sorrow as others who have no hope.” 1 Thessalonians 4:13 (NKJV) God has said that they are blessed. We read in Revelation 14:13 (NIV), “Blessed are the dead who die in the Lord from now on. ‘Yes,’ says the Spirit, ‘they will rest from their labor, for their deeds will follow them.”’ I’m confident that my friend Lou could repeat the words of the Psalmist found in Psalms 17:15 (NASB) “As for me, I shall behold Your face in righteousness; I will be satisfied with Your likeness when I awake.” I’m looking forward to the day that Jesus returns and Lou will awake and look into the face of Jesus, his Savior.