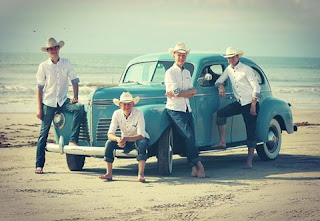 Last month, the producer of the Advent Heralds Quartet contacted us about the possibility of using one of our classic cars. They were planning a video shoot in multiple locations in Texas, including Houston, Galveston, San Antonio, and Wimberley, for their upcoming DVD and wanted to feature a classic car. After several calls and reviewing photos of some of our cars, he decided to use the 1940 Plymouth.

I enjoyed meeting the producer, Craig, and his family when they came to pick up the car. I learned that the video was much more involved than I had originally thought. I had assumed that the car would be used in a music video for one song. The plan was to spend a week shooting video for the songs from an entire album. The 1940 Plymouth was to be used to help tie all of the songs together. The quartet members would discuss the key spiritual thoughts that lead the audience through the gospel; building on the messages of each song and tying it all together while driving in the old car.

Throughout the week, I enjoyed getting messages and photos from Craig about the progress of the video shoot and how the car was doing. The constant message that I got from him was how God was leading. Their schedule was very tight, and they had numerous problems with the weather and their vehicles. But in each instance, things worked out, and Craig gave the glory to God and even considered them miracles. 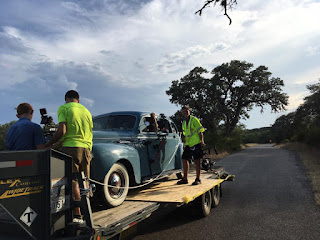 To begin with, he had planned to shoot with one cameraman. The group had a video director who loved to shoot solo, and that was his style. Not long before the video shoot he resigned and took another job, so to fill his place for this shoot, Craig reached out to another cameraman. The miracle was that this cameraman took the job on short notice, and said that he had two young men who had just returned from an extensive shoot in Europe who would love to come along and assist him for the experience. Craig said, “God knew what He was doing—we could never have made it without all three men on the team! Working as we did, to film as much as possible in the ‘golden hour’ lighting near sunup and sundown, we desperately needed the efficiency that three on the team brought. God is good!”

Craig added, “The greatest miracle, honestly, was the classic car. I had followed leads on several cars, and one seemed to really be settled. It was a friend of my cousin who lives in Wimberley, TX. However, just as I was so happy that the search for a classic car was over - I had talked at length with an owner in Tennessee, and another in Michigan and one in southeast Texas - I got the call that explained that their insurance would not cover anyone else driving the car. God provided Bob and Pat Lawry. They believed in the music evangelism project we were doing. Not only that—God does everything all the way—the car they were willing to loan us fit our project perfectly.” 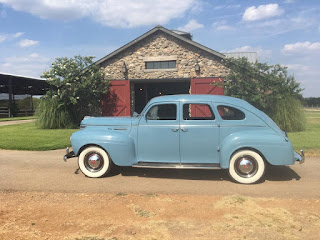 Well, maybe the 1940 Plymouth wasn’t quite perfect. One morning I received a call from Craig. The day before, the Plymouth hadn’t cooperated. It was a very hot day, and the car overheated and refused to run. The starter wasn’t working, so they had to push it to get it started. He wanted to know if I had any ideas about what they needed to do to get the car to run.

Later, Craig told me, “we lost a lot of time pushing that dear car in the stifling heat. That night we all fervently prayed that God would fix that car for us. We had fallen so far behind in filming discussions—the key spiritual thoughts that lead the audience through the gospel story—building on the messages of each song and tying it all together. The next day we filmed with that car for almost eight hours, and it never gave us any trouble. We did have to roll-start it a few times, so we got some exercise pushing it, but aside from that—it purred along so faithfully that we could hardly believe it has been so stubborn in refusing to run the day before! God answered our prayers again!” 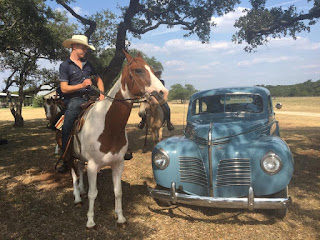 When Craig returned the car to us, he recounted to me what was probably the most dramatic miracle of the video shoot. It happened on the last day of shooting. Craig said, “we had been getting to bed quite late and getting up very early day after day due to our travel and filming schedule trying to catch the early and morning daylight hours. So, every minute of sleep was precious. I arranged for the crew to rise at 4:30 am that morning. However, rising a bit earlier myself, I started doing the math on the time and realized that I had made a real mistake. We could have risen a whole hour later and enjoyed that precious sleep! I realized this about the time that the crew began to get up and pack. So, I left our schedule unchanged, and we arrive at the Alamo for what was probably the most critical shoot a bit early, for our 5:30 AM permit. 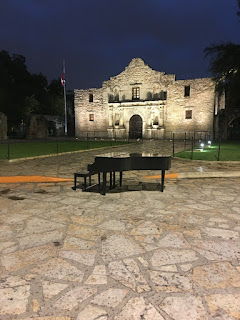 We had the permit for a whole 4 hours, and we generally only need 2 hours to shoot a song. However, the sentry on duty at the Alamo greeted us by saying, ‘You guys better hurry up with that piano and whatever singing you plan to do—a real downpour is due to hit here in half an hour!’ I must say, one look up into the night sky did reveal dark, ominous clouds, so we got into high gear and filmed for all we were worth, with God’s help. Raindrops were just beginning to fall as we put away our gear and ran to drop the ramps to load the classic car, which we had filmed driving to and from the Alamo. In just the few minutes it took us to load the classic car, the rain fell so hard that those of us doing that job were soaked all the way through to our socks—we were completely drenched! It was a miracle, a real miracle that we had awakened and started our day when we did! God had arranged that I am sure. We had had to book that film permit weeks in advance, and it was the most regulated and difficult permit of our whole production. If we had missed that 30-minutes to film that song—we could not have had the Alamo in our production. But, God knew all of that and arranged everything for us.”

Raw video montage of the photo shoot. It will be about 8 months before the DVD is ready to release.

Posted by Richard Lawry at 6:10 AM