While I was doing genealogy research, I came across an interesting story from many years ago. When I was in school, I learned that one of the causes of the War of 1812 was that Americans were outraged by the British Royal Navy’s practice of impressment, or removing seamen from U.S. vessels and forcing them to serve in the British Navy. Impressing American sailors became a common practice, with an estimated 15,000 American sailors impressed into the British Royal Navy in the years leading up to 1812.

Although I knew about the impressment of American sailors, I was not aware of the impressment of sailors from the Maritime Provinces in Canada. The Crown claimed a permanent right to seize men of seafaring experience for the Royal Navy. The men pressed into service were usually sailors in the merchant fleets, but would often be ordinary apprentices and laborers.

The Royal Navy used press gangs to force men into service. Press gangs operated in British North America with the legal backing of the British Parliament. A commissioned officer would lead the press gang with ten or so sailors under his command. A ship would come to a seaport, and if they needed men, the press gang would go ashore and force men to serve on the ship. 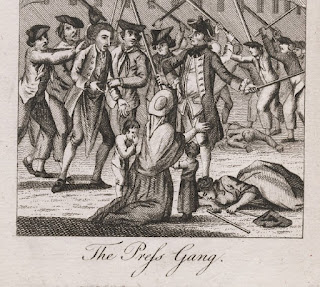 As you can imagine, these press gangs were extremely unpopular. They took men from their families by force and left many cities with a diminished work force. The use of press gangs sparked resistance, riots, and political turmoil in seaports such as Halifax, St. John's, and Quebec City. In spite of its unpopularity, the Royal Navy increased the use of press gangs in coastal areas of British North America. In response, sailors and residents fought back with a range of tactics. They sometimes reacted violently.

The story that I uncovered happened in St. John’s, Newfoundland in 1794. In October of that year, the warship Boston was ready to set sail from St. John’s after taking on supplies for a long voyage. The Boston was short eighteen men, so Lieutenant Richard Lawry led a press gang ashore to impress men into service. Lieutenant Lawry and several other sailors were escorting two recently impressed sailors when a mob attacked them.

According to reports from that time, the crowd behaving in a “riotous and tumultuous manner,” liberated the two pressed sailors and then beat “Lieutenant Lawry in so unmerciful a manner that he died the next morning of the wounds he had received in this fray.” Lawry’s murder was the only large-scale press gang disturbance in Newfoundland’s history and is considered one of the most serious crimes ever committed in Newfoundland. The incident brought press gangs into the spotlight, and they were used much less after the murder of Lieutenant Lawry. The last use of press gangs in Newfoundland was in 1815. 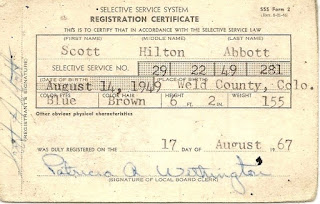 I’m glad that I don’t live in a place and time where it is legal to kidnap people and force them to work on a ship. The United States has other ways to keep its military forces properly manned. I was in high school during the Vietnam War. The military used the draft to keep the armed forces at full strength.

In 1969, President Nixon ordered a lottery system for selecting men to be drafted. I remember the tension that all of us boys felt when the lottery dates were announced. The draft was ended on Jan. 27, 1973, just a little more than a year before I turned eighteen. The relief that I felt was immense. Because I have experienced the possibility of being drafted, I have empathy for those who feared the press gangs of the 18th and 19th centuries.

Now, the United States operates under an all-volunteer armed forces policy. The military relies on recruiters to find men and women interested in the military and by explaining the benefits of military service, entice them to join. 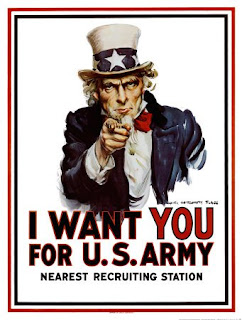 God doesn’t use a draft to get people to serve Him, and He doesn’t use press gangs. God created us to be in a mutually loving relationship with Him. He doesn’t force us into a relationship, but He gives us the free choice to decide for ourselves to love and serve Him or not.

God says, “I have loved you, my people, with an everlasting love. With unfailing love I have drawn you to myself.” Jeremiah 31:3 (NLT) God wants to draw us to Himself with loving kindness. He pursues us and tries to win us over with His goodness, His mercy, and His blessings. When we reject God through disobedience and ask Him to leave us alone in our sin, God does not force us to change. He will pursue us, but when we ask Him to leave us alone through our disobedience or our direct requests, He does what we ask. 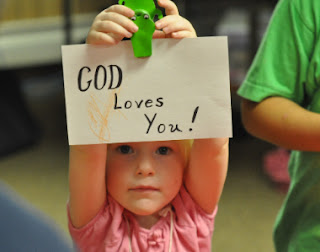 God doesn’t force His love on us, and He does not force us to love Him. He doesn’t use press gangs or the draft to obtain followers. God draws and woos us through His kindness, to win our affection. Since God wants to have a genuine loving relationship with us, He gives us the freedom of choice to love Him or not.

Gentle Reader, God will never force you to serve Him, but He wants a relationship with you. He loves you, and He longs for you to love Him in return. “We love Him because he first loved us.” 1 John 4:19 (KJV) David understood this when he wrote in Psalms 27:8 (NLT)  “My heart has heard you say, ‘Come and talk with me.’ And my heart responds, ‘Lord, I am coming.’” I hope that you will respond to God’s love for you and volunteer to join His forces. God is “longsuffering toward us, not willing that any should perish but that all should come to repentance.” 2 Peter 3:9 (NKJV)