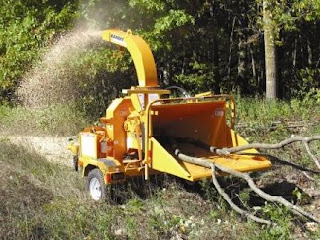 In my occupation as an auto bodyman and painter, I have painted many unusual things. One of the most unusual was a Bandit Wood Chipper that I painted for my cousin. Wood chippers have powerful feed systems with large chipper openings that allow you to break down limbs and branches. One of the things that I had to do before I could paint the wood chipper was to remove all the decals and stickers. So that I would know where to put the new decals when I finished painting, I took pictures of all the decals and locations for reference.

Wood chippers are very dangerous machines. I have never used one, but after reading all the warning decals, I have a new found respect for the dangers involved. 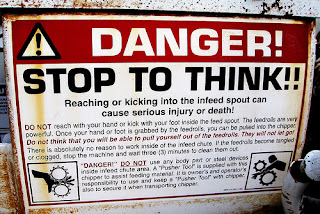 One warning label reads “DANGER! STOP TO THINK!! Reaching or kicking into the infeed spout can cause serious injury or death! DO NOT reach with your hand or kick with your foot inside the feed spout. The feedrolls are very powerful. Once your hand or foot is grabbed by the feedrolls, you can be pulled into the chipper. Do not think you will be able to pull yourself out of the feedrolls. They will not let go!” Another one reads “DANGER! SEVERE INJURY OR DEATH CAN OCCUR! UNLESS THESE INSTRUCTIONS ARE FOLLOWED.” 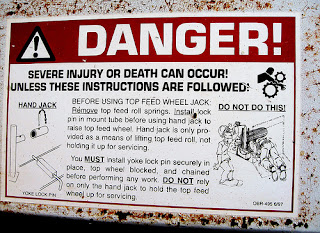 Do you think that Bandit Industries Inc. is serious about their warnings? Are they plain enough for you to understand? The wood chipper was covered with these warnings. I took 30 pictures of warning labels. The manufacturer wants to make sure that you understand the dangers of working with this machine. 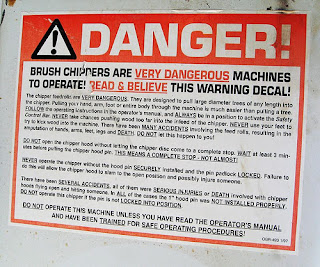 The wording on this label made me smile; the company is very serious about their warnings. “BRUSH CHIPPERS ARE VERY DANGEROUS MACHINES TO OPERATE! READ AND BELIEVE THIS WARNING DECAL!” They want you to read and believe. One line on this warning decal reads "There have been MANY ACCIDENTS involving the feed rolls, resulting in the amputation of hands, arms, feet, legs, and DEATH. DO NOT let this happen to you!”

These warnings made me think of the Bible and all the directions and warnings that God has placed in it. In Jeremiah 6:10 (NET) the prophet says, “Who would listen if I spoke to them and warned them? Their ears are so closed that they cannot hear! Indeed, what the Lord says is offensive to them. They do not like it at all.” Why is it that we don't want to listen to the word of the Lord? When I read the warnings on a piece of machinery, I take them seriously, but if I read it in the Bible, I don't want to listen.

It seems that all products come with warning labels. Some of them seem very silly. A can of air freshener has the warning, “do not spray on face or eyes.” That seems reasonable, but I couldn’t quite understand why it contained the warning, “keep out of reach of children and teenagers." Nytol sleep aid tablets have the warning, “may cause drowsiness.”  Vidal Sasson hair dryers want to make sure that you “do not use while sleeping.” A Superman costume comes with this warning; “This costume does not enable flight or super strength.” 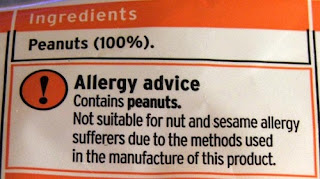 Some warnings are very obvious such as, "May irritate eyes,” found on a can of self-defense pepper spray. Or, "do not use orally," on a toilet bowl cleaning brush. A hammer manufacturer thought it was necessary to include the warning, "may be harmful if swallowed." A bag of peanuts has the warning, “may contain peanuts.” But other warnings make you scratch your head and wonder why. Like the bottle of shampoo that contains the following warning; “Caution: The contents of this bottle should not be fed to fish.” Or the clothing washing instructions that say, "do not wear for sumo wrestling."

Because of these often silly warnings, Most of us don’t pay any attention to the warnings placed on the products that we use. But some of them are very important, such as the ones found on the wood chipper that I painted.

The Bible contains a clear warning in Romans 6:23 (KJV).  As clear as the warning decals on a wood chipper. It says "The wages of sin is death." That is clear. Thankfully the verse doesn't end there. It also says "But the gift of God is eternal life through Jesus Christ our Lord." 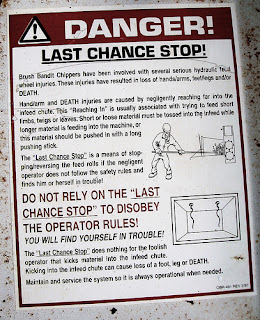 Gentle Reader, many times we look at God's law as a jail. We feel that it creates uncomfortable restrictions. We need to ask God to give us a love for his commandments, to instill in us a desire for the peace and safety of His law. 1 John 5:3 (NKJV) tells us "For this is the love of God, that we keep His commandments. And His commandments are not burdensome.” God’s warnings aren’t there to keep us from having fun. It is just the opposite. “Joyful are people of integrity, who follow the instructions of the Lord. Joyful are those who obey his laws and search for him with all their hearts.” Psalms 119:1,2 (NLT)