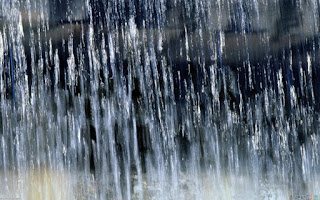 The stately two-story house stood on the banks of Lake Houston. In the forty years since she had been lovingly built by her family, she has never seen anything like it. Wave after wave of heavy rains batter her. The winds are swirling around her, and she is creaking and groaning as she struggles to withstand the storm. In the yard, trees are swaying madly, screaming as their limbs strain against the onslaught. The house begins to be tested: the roof, the windows, the walls were all under attack. The house worries that she will be damaged and that her family will not be able to live there anymore.

When the winds finally die down, the stately house realizes that she is still standing. She has made it through the storm. Her mind drifts back to the time that the family built her. Dad was a builder by trade, and he built the stately house where he would raise his family. Mom loved the new house, and it’s delightful setting on the shores of Lake Houston. The kids enjoyed bringing their friends home to the stately house. They especially liked the swimming pool in the backyard. Mom was happy when laughing kids were having a good time at her house. The stately house was thankful that she was still standing and that soon the family would be able come back home. 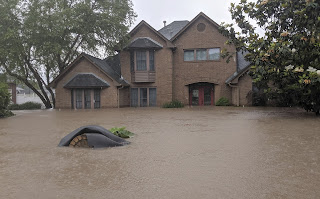 Even though the winds stopped battering the stately house, the rains continued to fall. Over the next two days, over 30 inches of rain fell in the area. The water levels of Lake Houston rise until they are lapping at the front door of the house. But it keeps raining, and the water keeps rising. Soon there are several inches of water on the floor, and the water is rushing in at the front, the sides, the back. To the stately house, it feels like an invasion. By the time the lake reaches its highest levels, deep water covers the entire first floor of the stately house. She is waterlogged and very sad. When the water levels start to recede, the house wonders what will become of her. Will her family ever be able to live in her again.

Inside, there’s at least an inch of mud on the floor, and the mold on the walls is chest high. It looks like someone broke in and ransacked the house. Everything from the shelves covers the floor. The knife block, with the knives still in it, sits in the living room. The refrigerator is full of spoiled food, and the house stinks like an entire army of dirty feet. The front door is blocked by a bookcase so swollen with water that it collapsed in a huge pile of books and shelves. The once stately house is a stinky mess. 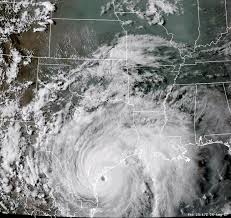 Hurricane Harvey was a Category 4 hurricane that caused this historic, catastrophic flooding in August 2017. The family displaced from the stately house were among 30,000 families in the area that had no place to stay. They wondered if their family home would be able to be saved. When Dad first inspected the damage, his heart sank. There was so much damage. There was debris everywhere. How could they ever make the stately house liveable again?

When the family started the daunting task of cleaning up, friends started showing up to help. Mom was standing at a second-story window and looking out over the mess where there had once been a yard full of laughing children. She couldn’t believe what she was seeing. She looked out at a group of her kids' friends partying. Her kids had become adults many years ago, but here were their friends, the same kids who had spent so much time at the stately house when they were young, once again having a great time in her yard. There was loud music, laughing and dancing. They were working hard with shovels and brooms cleaning up the debris. It was dirty, smelly, nasty work. But they were having a great time.

Mom couldn’t believe that so many people were there to help with the cleanup. While they were cleaning debris, a carpenter drove up in his pickup, pulling a trailer with his tools. He told Dad, “when I heard that your house was flooded and that you were doing the repair work yourself, I came as soon as I could. I have brought my tools, and will stay and work with you until you are finished.” Many other people donated their time. Before long the house was once again stately; ready for the family to move back in. 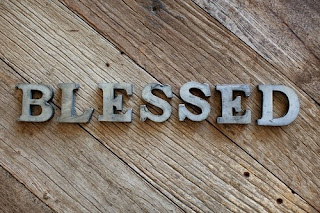 When Mom, from the stately house, was telling me the story; she told me, “I have never felt so blessed in my life as I did in the aftermath of Hurricane Harvey.” I thought, “how can someone feel blessed when they are dealing with such trying circumstances.” I know that the Bible says, “God can give you more blessings than you need.” 2 Corinthians 9:8 (NCV) But who needs to have their home devastated by a hurricane?

As Mom continued the story, she told me that as a builder, Dad had given many of the people that came to volunteer their start in the business. They loved and respected him, and when they heard that he needed help, they came. Mom had shown love and kindness to her kids' friends. She had let them know that they were always welcome to share in the happiness of the stately house. 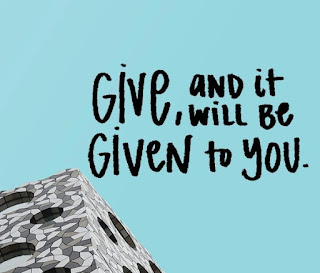 Gentle Reader, “give to people and they will give to you. They will fill your cup, press it down, shake it, and let it run over. That is what they will give to you. How much you give to others is how much God will give to you.” Luke 6:38 (WE) Our blessings are based on our willingness to bless others. How we treat others will determine how we are treated by others and by God. God has been gracious with us, so we should share that graciousness with others. If we do, the blessings in our cup will be pressed down, shaken, and running over.

Posted by Richard Lawry at 5:00 AM