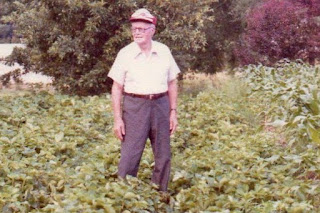 My Grandpa Lawry loved to tell stories, sing, and recite poetry. Some of my fondest memories of my childhood were spending time with my Grandpa and listening to him. One of my favorite poems that he would recite is "So Did I." Recently I found a digital copy on the internet of the book, Uncle Charlie's Poems, written by Charles Noel Douglas that includes the poem. Reading "So Did I," and reminiscing about my Grandpa made me miss him.

SO DID I - Charles Noel Douglas

That long, lank dude as sparks our Sue was to the house last night,

An' talk of having fun, well, say, I thought I'd die outright.

I've only got to think, an' then I durned nigh have a fit.

He came to supper, an' we had, o' course, a dandy spread.

Sue trotted out her chocolate cake, an' Mom her fancy bread.

An’ that long dude he stuffed hisself with cake, preserves an' pie,

Till every plate was cleared, then Jim he guessed he'd had enough.

Most folks in love don't eat at all, but Jim ain't one of such,

For he allowed love always made him eat just twice as much.

Up from his chair Jim staggered, you could almost see him swell.

He'd eat so much, how he got up that's more than I can tell.

I saw him beckon Sue, an' she just answered with her eye,

Then to the parlor off they sneaked, an' so did I.


They made for that old settee in the corner by the door,

An' I crawled in an' hid behind, where oft I hid before.

An' then I heard him whisper: "Sue, just let me give you one!"

An' then she giggled foolish-like; you know how young folks spark

A-fore the parlor lamp is lit, an' things is kind 'er dark.

Then jabbed her fist in Jim Snagg's neck, an' so did I.


I bobbed down quick, Jim didn't see, for love, you know, is blind;

An' then with cord I started in Jim's swell coat-tails to bind.

He'd on his new Prince Albert, for Jim was quite a card,

An' 'neath the settee then I crawled, an' laid flat on the floor,

With Sue's steel hatpin in my band, six inches long, or more.

Then, just as Jim was kissing Sue, I jabbed it in his thigh;

He yelled an' rolled in fourteen fits, an' so did I.


You should have seen the circus, when that pin got busy - you

Must know Jim hit the ceiling, an' the settee went there, too,

An' 'round the room he dragged it, like a mule hitched to a truck,

Till both his coat-tails they tore off, an' Jim just cussed his luck.

An' stumbled over Sue, who lay unconscious on the floor.

Pop dashed right off for water; say, you should have seen him fly;

He soused ten buckets in Sue's face, an' so did I.

At last they got Sue on a chair, poor gal, she couldn't stand,

While Jim stood there an' rubbed hisself, a coat-tail in each hand.

An' Sue no sooner saw him than she started in to grin,

Then flopped down on the floor, an' chucked another fit again.

We soused her "to" with water, then an argument arose

Just as to what old animal had bit Jim through his clothes.

Sue guessed a snake, Ma said she thought 'twas lightning from the sky, 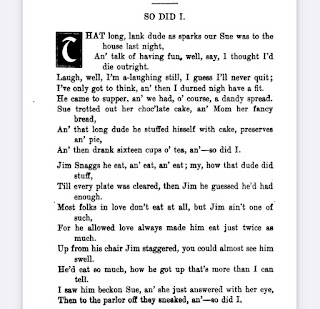 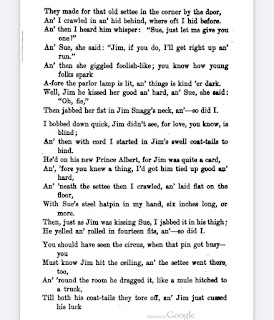 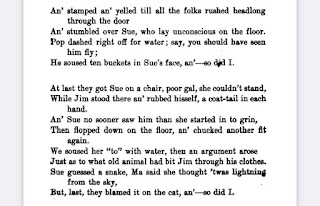 Posted by Richard Lawry at 9:49 AM