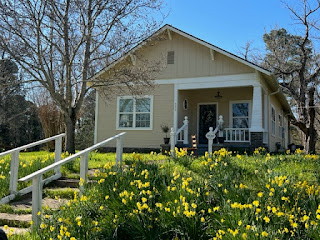 The baby blue sky and the warmth of the sun pushing away the cool of the morning lifted my spirits. The cold, damp dismal weather of the previous day was a thing of the past as I looked forward to the promise of spring. "Today will be awesome," I thought as I prepared for our outing to the Jonquil Festival in Old Washington.

As we drove south out of the Ouachita's into the flat land of Southern Arkansas, the changes were noticeable. The pastures and roadsides were green, and many homes along the road had patches of bright yellow daffodils. Spring was already making its mark, with the white blossoms of wild plum and serviceberry trees dotting the landscape. The soft glow of green tinged trees promised the glory of rebirth as their buds opened and tiny new leaves unfurled. 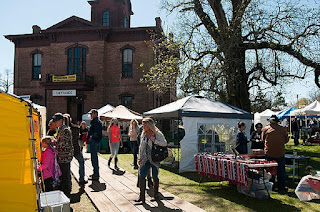 When we reached Old Washington, traffic came to a standstill. Thousands of people had converged on the small town. Vendors had set up booths around the old courthouse, and people crowded into the area. After looking around the festival area, we headed into the old part of town, where it seemed that jonquils filled every yard. Each bloom seemed to be lifting its head to the heavens and trying to soak up the sun's rays.

Old tractors and collector cars filled an open field a few blocks from the courthouse. As I was walking around looking at the vehicles, I heard "PUTT whoosh whoosh whoosh whoosh PUTT whoosh whoosh whoosh PUTT" The sound was coming from an engine, but it was bizarre. There was no definite rhythm to the sound. I investigated and found a row of trailers with antique stationary engines on them. The unusual sounds they made were the result of their design. The engine fires and then coasts until the speed decreases, and it needs to fire again to maintain its average speed. 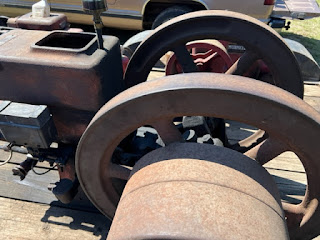 These engines are called hit and miss engines because they don't fire or "hit" on every rotation. The engines misfire by design. When stationary engines were first designed in the late 1800s, the technical problem inventors needed to solve to make engines usable was how to keep the engine running steadily under varying loads. Your foot on the gas pedal does that in your car, but a stationary engine needs automated speed control. The solution for most manufacturers was the centrifugal governor.

These machines use ingenious and complex governors developed to maintain a constant speed as the loads vary. Most hit-and-miss engines had a horizontal piston with two heavy flywheels connected to the ends of the crankshaft. If the motor was spinning at the desired speed, the exhaust valve was held open, and there was no compression and no engine firing, creating the "whoosh, whoosh, whoosh" sound as the piston idled back and forth, pushing air in and out of the cylinder through the open exhaust valve. 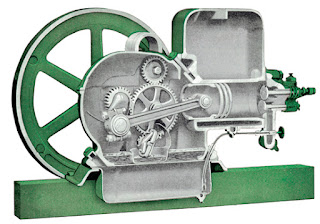 As the wheel's rotation slowed, the weight was drawn toward the center of the wheel, where it nudged a lever that closed the exhaust valve. The piston created a suction that opened the intake valve and drew in the fuel/air mixture with the exhaust valve shut. The engine emitted one loud "PUTT" as the power stroke spun the flywheel faster. The faster spin caused centrifugal force to move the weight toward the flywheel's rim again, which canceled firing until it slowed, and the weight was drawn back down and the cycle repeated. Under heavy load, it would fire on every other stroke. It would fire every sixth or eighth stroke when it was just idling.

The first engines appeared about 1890, but by the early 20th century, the number of manufacturers was in the hundreds. These engines cost up to 200 dollars, but almost every farm had one or two by 1910. Although called stationary, the machines were almost always mounted on iron wheeled dollies that could be moved to different places on the farm. For the first time, mechanical power was available to the small-scale farm. Today these engines are prized by collectors who lovingly restore them to perfect running order to show them at historical fairs and festivals like the one in Old Washington. People are fascinated by the ingeniously complicated mechanical works exposed to view. The piston, connecting rod, driveshaft, and flywheel are all open to view as they run. And that PUTT whoosh whoosh whoosh whoosh PUTT sound is so alluring.

As I watched and listened to the engines running, I thought about things in my life that are hit and miss. One of those things is my relationship with God. I attempt to create routine and consistency in my life, but I often sacrifice my time with God for consistency in other areas. I become a hit and miss Christian.

Jesus tells us, "Abide in Me, and I will abide in you. A branch cannot bear fruit if it is disconnected from the vine, and neither will you if you are not connected to Me." John 15:4 (VOICE) To abide is to continue in a place, remain stable, and be consistent. Abiding is simply spending time together, day in and day out. A relationship can't thrive when it is hit and miss.

Posted by Richard Lawry at 7:24 AM