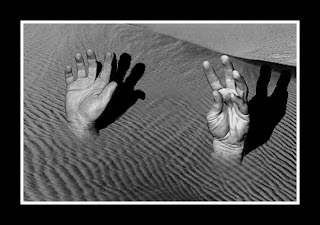 Recently I was reading from the Max Lucado book, The Applause Of Heaven, and the following passage really captured my attention.

Grudge is one of those words that defines itself. Its very sound betrays its meaning.

It starts with a growl. “Grr …” Like a bear with bad breath coming out of hibernation or a mangy mongrel defending his bone in an alley. “Grrr …”

Remove a GR from the word grudge and replace it with SL and you have the junk that grudge bearers trudge through. Sludge. Black, thick, ankle-deep resentment that steals the bounce from the step. No joyful skips through the meadows. No healthy hikes up the mountain. Just day after day of walking into the storm, shoulders bent against the wind, and feet dragging through all the muck life has delivered.

Is this the way you are coping with your hurts? Are you allowing your hurts to turn into hates? If so, ask yourself: Is it working? Has your hatred done you any good? Has your resentment brought you any relief, any peace? Has it granted you any joy?

Max's words made me think of the time that I was going Geocaching in Tyler, Texas. If you are not familiar with Geocaching, It is a modern day treasure hunt powered by a GPS. I had found the geocache that I was searching for, and was finding my way back to my car when I got a bit lost. I had forgotten to put the coordinates of my cars location in the GPS, so I was just trying to remember my way back through the woods. I came into a brushy clearing and was trying to decide which way to go. There was an area that looked a bit wet and muddy, so I stepped carefully across it to avoid getting my shoes dirty. Imagine my surprise when the "solid" ground gave way, and I sank up to my armpits in stinky mucky quicksand. At first I was just angry that I was filthy, but then I started trying to get out and realized that I was in a serious predicament. Fortunately I was able to reach a small shrub than was strong enough for me to pull myself out.

I was now on the opposite side of the quicksand from where I needed to be and was trying to decide how to proceed. I layed out spread eagle and "swam" to the other side. It wasn't until I thought back on the experience as I was driving back to the condo that it dawned on me how much trouble I had actually been in. I was by myself, and my wife had no idea where I was. I never saw another person while I was out in the woods. As I was driving back I gave a special prayer of thanks to God for keeping me safe.

This is what I looked like after I got out.

Holding a grudge is a lot like being in quicksand. When we hold a grudge, we just can't seem to get out of it's grasp. The more we think about it and struggle with it the more we sink, and the deeper we go. I really think that the only way we can get ourselves out of the quicksand of holding a grudge is through the power of God. Paul writes in Ephesians 4:26,27 "Don’t sin by letting anger gain control over you. Don’t let the sun go down while you are still angry, for anger gives a mighty foothold to the Devil.

Don't give the Devil a mighty foothold by holding a grudge.
Posted by Richard Lawry at 1:16 PM