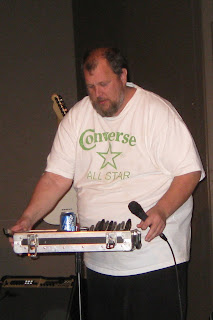 Today I was asked to say a few words at my friend Bear Barton's memorial service.  Here are the thoughts that I shared.


It has been my privilege to be a friend of Bear’s for almost 15 years.  As I thought back over the time I knew him I was impressed by the things that were important to him.

Family – Those of you in his family know how much he loved and cared for you.

Friends – If you were a friend of Bear's he was very loyal and would do anything he could for you.  If you were hurting, he hurt with you.

Animals – Bear loved his wolves and went to great lengths to take care of them.  Proverbs 12:10 tells us that a righteous man cares for the needs of his animal.

Music – Everywhere Bear went he was known for his music.  Music was the breath of life to him.

God – Bear loved God, and knew his Bible.  He studied for himself, and didn’t let others sway his convictions.

What also impressed me about Bear were the things that weren’t important to him.

Material Things – Bear never sought after the wealth of the world.  The things that he did have he would gladly give you if you were in need.

Acclaim – As great a musician as he was, Bear always wanted to be in the background.   He just wanted to be a part of the experience.

Shortly after hearing Friday morning that Bear had passed away, I sat down and wrote these words and posted them on my blog.

Today my friend Larry "Bear" Barton passed away. I can still remember the first day that he walked into church and into my life. Bear was a big guy with a huge heart. Helping others was a priority for him. When the company that he worked for began hiring a number of Spanish speaking workers, Bear began learning Spanish so that he could talk better with them. He became a friend and advocate for many. I'm sure that he will be sorely missed.

Bear's love and concern for others makes me think of the text found in Matthew 25:37-40 "Lord, when did we see You hungry and feed You, or thirsty and give You drink? When did we see You a stranger and take You in, or naked and clothe You? Or when did we see You sick, or in prison, and come to You?’ And the King will answer and say to them, ‘Assuredly, I say to you, inasmuch as you did it to one of the least of these My brethren, you did it to Me." That is the way Bear lived.

One of my favorite memories of Bear was attending his 50th birthday party. I have never been to a birthday party like it. Richie Owens and Bear have been playing music together for over 15 years. Bear is a harmonica player extraordinaire. Richie rented the Ouachita Little Theater, and invited many musicians that he and Bear had played with over the years to come and jam.

Richie projected video on stage of Bear playing with a number of different musicians, with some of the video being a number of years ago. We enjoyed seeing Bear with hair.

The party lasted until late into the evening.  It was after 10:00 when the jam session ended, and then I enjoyed getting to visit with Bear for a while. I am happy that I got to be with him at his birthday party.

Today the world lost a truly wonderful person; Someone who was always helping people and loved everyone. Goodbye and rest in peace my precious friend Larry "Bear" Barton, you will be missed by to many to count.

I was amazed by the fact that over 550 people read this post online, showing that  Bear was loved by so many.

My cousin Bear Barton was born with a tender heart, which only deepened and expanded throughout his too short stay on this earth. He was born caring - about animals, who are easy to love, and about people, who are not.

He was a healer, who knew how to come alongside those who were hurting and listen, and gently guide, and he would tell you straight up what he felt you needed to hear...and then again, if you needed reminding.

He healed his wolves, cooking special meals for them, patiently nursing them through injuries and illnesses, never neglecting their needs, even though it could be totally time consuming sometimes.

And he mentored so many young people, keeping them accountable, being the one who cared whether they messed up their lives, and encouraging them to give life another chance.

When I heard the doctors' diagnosis: heart failure, I had to disagree. Bear's heart didn't fail. Bear's heart triumphed, and this often bitter and despairing world will never be the same because of him.

I appreciate reading what you had to say about him, and especially the text from St. Matthew.

I have to agree with Carol.  Bear's heart didn't fail. Bear's heart triumphed, and this often bitter and despairing world will never be the same because of him.  Bear’s big heart touched so many of us.

In Thessalonians 4: 13-18 The Bible tells us;  "But I do not want you to be ignorant, brethren, concerning those who have fallen asleep, lest you sorrow as others who have no hope. For if we believe that Jesus died and rose again, even so God will bring with Him those who sleep in Jesus.  For this we say to you by the word of the Lord, that we who are alive and remain until the coming of the Lord will by no means precede those who are asleep.  For the Lord Himself will descend from heaven with a shout, with the voice of an archangel, and with the trumpet of God. And the dead in Christ will rise first. Then we who are alive and remain shall be caught up together with them in the clouds to meet the Lord in the air. And thus we shall always be with the Lord. Therefore comfort one another with these words".

Bear is sleeping, waiting for the trumpet of God, waiting for his Lord to return, waiting to meet him in the air; to always be with the Lord.  Let’s take comfort in this promise.

Here is music that was played at the memorial WAYFARING STRANGER - BEAR BARTON, HARP AND RICHIE OWENS, GUITAR AND VOCALS