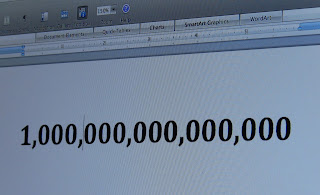 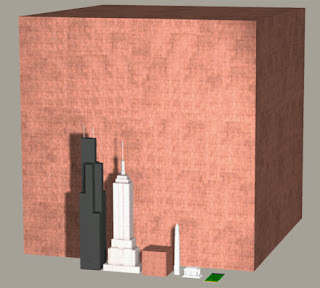 To try and get an idea of what a quadrillion is take a look at this cube.  It represents 1,000,067,088,384,000; or just over one quadrillion pennies stacked in a cube. To get an idea of the scale we have from right to left, a football field, then the Lincoln Memorial, then the Washington Monument (555 feet tall), then a cube of one trillion pennies, then the Empire State Building (1,250 feet tall), then the Sears Tower (1,450 feet tall).  The cube is roughly a half-mile wide, (2,730 feet) and would weigh an astonishing three billion tons. That's a lot of pennies. 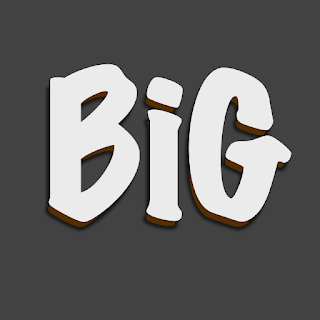 When people think of big numbers it is interesting the things that are used as symbols of big numbers.  Matthew 10:30 in the Bible says, “but the very hairs of your head are all numbered”.  So how big a number is the very hairs of your head.  According to the Harvard university website Bionumbers, the number of hairs on a human head range from 90,000 to 150,000.  Interestingly the number of hairs is different for different hair colors.  Blondes have 150,000 hairs, people with brown hair have 110,000 hairs, those with black hair have 100,000 hairs and redheads have just 90,000 hairs. 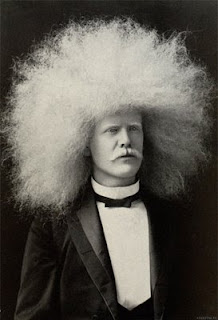 Other symbols of a big number in the Bible are found in Genesis 22:17, “I will multiply your descendants as the stars of the heaven and as the sand which is on the seashore”.  First let’s look at sand which is on the seashore.  Science writer David Blatner, in his new book Spectrums, says,  "a group of researchers at the University of Hawaii, being well-versed in all things beachy, tried to calculate the number of grains of sand.  They said, if you assume a grain of sand has an average size and you calculate how many grains are in a teaspoon and then multiply by all the beaches and deserts in the world, the Earth has roughly, and we're speaking very roughly here, 7.5 x 10 to the 18th  grains of sand, or seven thousand five hundred quadrillion grains". That's a lot of grains of sand. 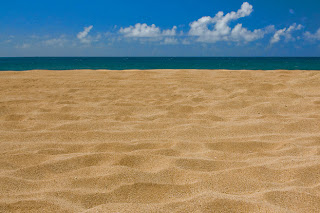 What about the stars of the heavens?  To get an idea of how many stars are in the universe, let’s look at a photo taken by the Hubble Space Telescope called The Hubble Ultra Deep Field. Astronomers picked a seemingly empty spot in the sky. Staring at the spot in the sky for ten days, The Hubble Telescope kept taking pictures one after another for the entire exposure time, accumulating data. Astronomers put the exposures together into one final picture. Each time they added an exposure, the view got deeper, revealing fainter objects. When they were done they had the deepest picture ever taken of the heavens. 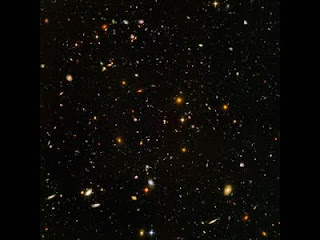 The image is of a small region in the constellation Ursa Major. It covers an area 2.5 arc minutes across, one part in a million of the whole sky. The image contains an estimated 10,000 galaxies. That would mean that the whole universe contains a million times 10,000 galaxies. Astronomers estimate that our home galaxy, the Milky Way, contains around 400 billion stars. How many stars are in the universe?  10,000 million times 400 billion or 4 times 10 to the 21st.  That is 4 million quadrillion.  So that makes stars the champion of big numbers, right?  Yes, the number of stars in the heavens is "an unbelievably large number, but you will find the same number of molecules in just ten drops of water.   If you took 10 drops of water (not extra-big drops, just regular drops) and counted the number of H2O molecules in those drops, you'd get a number equal to all the stars in the universe.  I can't imagine how big the number is that describes the number of molecules of water that are in the earth's oceans. 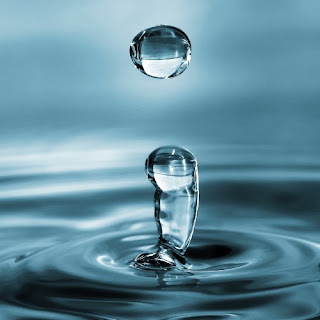 This is amazing to me. For some reason, when someone says million, billion or trillion, quadrillion, I see an enormous pile of something, great sweeps of desert sand, twirling masses of stars. Big things come from lots of stuff; little things from less stuff. That seems intuitive.  But that's wrong. Little things, if they're really little, can pile up just like big things.  So next time I look up at the sky at all those stars, I will be impressed, of course, by the great numbers that are out there. But I will remind myself that at the other end of the scale, in the nooks and crannies of the physical world, in the teeniest of places, there are equally vast numbers of teenier things.