Article published in the January 15, 2014 issue of The Polk County Pulse featuring my wife as the Citizen of the Week.  Written by Jaclyn Rose. 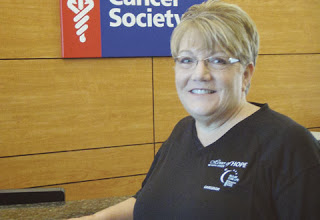 Regina Lawry was born in Denver, Colorado and lived in the same house until she was married.  In grade school she attended Denver Public Schools.  Upon entering high school, Regina transferred to a private Christian boarding school in Loveland, Co, called Campion Academy.  It was there that Regina met her husband and made lifelong friends that she still stays in touch with to this day.  “My father wasn't a rich man, he worked hard as a tile layer and took on extra jobs so he could allow my siblings and I to attend this great school.  It was the most wonderful experience of my life.”

Regina and her husband of 38 years, Richard, or Richie, as he is known by his friends, became friends while in American History class and were assigned to work together on a project.  “Richie was painfully shy but we became great friends and after high school we didn't want that friendship to end.  We started dating and then got married.  The key is to just be best friends.  As life goes on the romance sometimes fades so you have to enjoy being together.”

Regina and her husband have two children, Cynda and Gavin, and family is of extreme importance to them.  “Family has always come first.  When Cynda was little, Richie commuted 50 miles each way to work, so he left before she woke up in the mornings and was home after she was in bed. He came to me at that time and said he wanted to move to Arkansas, where his parents were living.  In two weeks we sold the house and moved to Mena.  It was culture shock to me.  I am such a city girl but Polk County has been so good to us.  We love it here, we love the people.  We are active members of Mena Seventh Day Adventist Church, where Richie is the head elder.”

Regina is now a grandmother to three sweet granddaughters which is a role she cherishes.  “My granddaughters: Autumn, Rebekah and Elisabeth are the light of my life.  I was born to be a grandma.  I waited my whole life for it, I just didn't know it.  I tell my oldest granddaughter that I was so full of joy when she was born that it just kept running out of my eyes,” Regina said with a grin.

Regina ran a fabric shop in Mena for a while before closing it to homeschool her son.  When he left to attend boarding school in Gentry, Arkansas, she decided to go back to work and began working at the USEM Mena Federal Credit Union.  “I’m the CEO and the Janitor.  I love my job.  I love the people.”

In 1975 Regina’s mother was diagnosed with Leukemia and began treatments, which at that time consisted of blood transfusions because no other treatment was available.  Regina’s mother was approached to do a study on the progression of the disease in the bone marrow.  Her family discouraged her from participating, knowing it would likely not help and would cause a great deal of pain.  She insisted on the study, however, and her reason behind it has given Regina her passion in life.  “We tried to talk mom out of the study and her response was, ‘you never know who this will help along the line.’  Twenty years later those studies saved my sister’s life and gave her an additional fifteen years to live.”  Cancer is a disease that has not only affected Regina’s mother and sister, but every member of her immediate family has been diagnosed with some form.  Because of her desire for a cure, Regina has worked tirelessly for the cause through the Relay for Life program.  She was chairperson for the local chapter for five years, has served on the State Leadership Council and is a Hero of Hope for the Mid-South Division.  It is truly her life’s desire to find a cure.  “I've seen firsthand the work the American Cancer Society has done and how it has helped my family.  It may not seem like [cancer] has anything to do with you, it doesn't affect you until it affects you.  But you never know who you are going to help.  If my children or grandchildren are ever diagnosed I don’t want it to be like it was for my mother.  I want there to be a cure.”
Posted by Richard Lawry at 4:13 PM