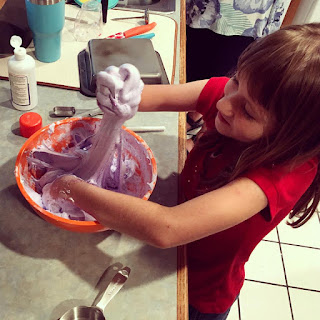 This summer, our granddaughters have been spending time with us. Each one gets to spend a week at Grandma’s house. They like the extra attention that comes from being the only grandchild at Grandma’s. My nine-year-old middle child granddaughter was the last visitor to Camp Grandma. While she was here, one of her favorite activities was making slime with Grandma.

Every night of the week she made slime. She made plain slime, colored slime, glitter slime and fluffy slime. She enjoyed making the slime and playing with it after it was made. Grandma helped her find recipes for slime on the internet and Papa was sent to the store to buy the ingredients. Some recipes worked better than others. 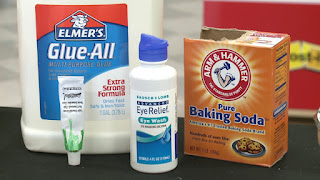 Her favorite recipe used one bottle of Elmer’s Clear School Glue with ½ tablespoon of baking soda mixed in and then one tablespoon of contact lens solution added. To this basic recipe, she would add food coloring and glitter to make different varieties of slime.

She isn’t the only kid that likes making slime. Slime is everywhere. Kids around the world are a part of this fad. Whether they live in South America, Asia, Europe, Australia, New Zealand or just about anywhere in the world, the slime craze has spread like wildfire through social media.

Many stores can’t keep the glue needed to making slime in stock. There are many recipes and video tutorials for making slime on the internet. Instagram alone lists more than 2 million posts with the hashtag #slime. The slime mania has led to a spike in sales of Elmer’s School Glue. Caitlin Watkins, a spokeswoman for Elmer’s Glue, said the company had seen a recent surge in liquid glue sales “due in large part to slime mania.” The firm plans to increase production of Elmer's White School Glue, the most popular glue for making slime. 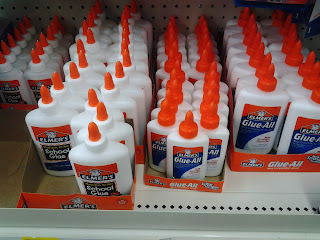 According to Wal-Mart spokesperson Michelle Malashock; “Walmart has seen a rise in glue sales, and we are rolling out a plan to respond to the increase to make sure kids and parents can find the glue they need to have fun with the latest crafting trend.”

I wondered what was so intriguing about this squishy, oozing, not quite solid, not quite liquid substance. Why had this become a worldwide fad? I asked my granddaughter why she liked making and playing with slime. I told her that it was a disgusting substance with no point or purpose. She said, “but Papa, it’s fun.” 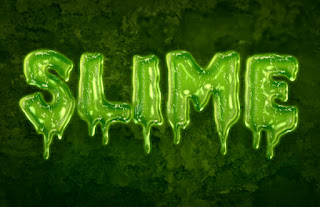 In our Christian experience, we often go looking for slime. We want to play with things that are forbidden to us. We want to see how close we can come to the edge of what God has forbidden. We want to see if we can enjoy the pleasures of Satan without it sticking to our hands and staining our clothes.

How often do we allow ourselves to play with sin? How often do we tell ourselves that we’re justified in our behavior? We tell ourselves that the slime is fun to play with and it doesn't have any lasting consequences, but Jesus tells us that there are consequences. In the parable of the sower, He talks about Christians who allow their desires for other things to choke them out. “Now these are the ones sown among thorns; they are the ones who hear the word, and the cares of this world, the deceitfulness of riches, and the desires for other things entering in choke the word, and it becomes unfruitful.”  Mark 4:18,19 (NKJV) 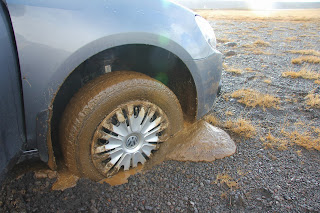 Several years ago my wife and I were driving on a dirt road not long after a heavy rain. We came up to a tee in the road, and I asked my wife which way we should go. She didn’t answer me, so being the smart aleck that I am, I pulled straight through the intersection right up to the edge of the road. Because of the recent heavy rain, the edge of the road was very soft. As I pulled up to the edge of the road, my front tires sank deep into the mud. I put the car in reverse and tried to back up; the front wheels just sank deeper and deeper into the mud. We were stuck. I had to get the small jack out of the trunk of the car and with great difficulty jack the car up and find something to put under the tires so we could back out. By the time I finally got the car out of the mud, I was covered in mud myself.