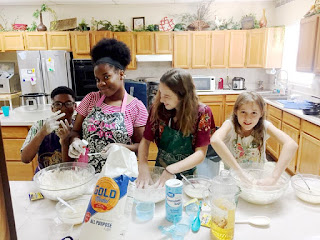 The sounds of youthful conversation and laughter echoed down the hall. I walked through the corridors of the church to investigate. As I approached the fellowship room, I could hear more clearly. The cheerful noised seemed to be coming from the kitchen. What was in the kitchen that could create such joy and happiness in a group of kids?

When I poked my head into the room, I saw that the youngsters were busily working away as they talked and giggled. There were large mixing bowls on the counter, and the kids were kneading mounds of dough with their hands. Flour seemed to be everywhere; on the counter, on the floor, and on the kids. They were preparing for a homemade Chicago style deep dish pizza party that evening. 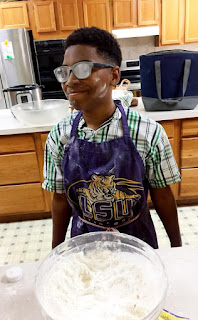 The kids were part of the Jesus First youth group. They were hosting an End of Summer Student Dedication party. They had invited area school-aged kids to an evening of pizza, fun, games, singing, and worship to mark the end of summer vacation and the beginning of a new school year.

After the pizza dough had risen, the kids were back in the kitchen placing the dough in a dozen large pans. I was amused as I watched them put the dough in each pan and try to spread it out over the bottom and up the sides. The dough wasn’t cooperating, but eventually there was dough in every pan; ready to become a Chicago Style deep dish pizza. When the rest of the kids arrived, the pizzas were ready to be made. 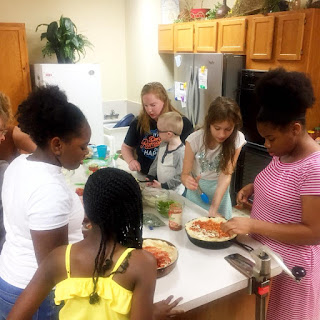 The kids paired up, and each pair was responsible for building a pizza. They started by pressing a nice thick layer of Mozzarella cheese into the dough. Next, they covered the cheese in tomato sauce followed by toppings such as olives, onions, peppers, and mushrooms. To top off their pizza creations, they covered everything with another layer of Mozzarella cheese. When all of the finished pizzas were ready to be placed in the ovens, it was time for fun and games.

Pastor Tony lead out in lively, uplifting songs with the kids eagerly singing along. One of the evenings favorite activities was the cocoon race where each participant was wrapped tightly in a sheet, then tried to make it to the finish line as quickly as possible. The cheering and laughter filled the fellowship hall in a cacophony of noise. 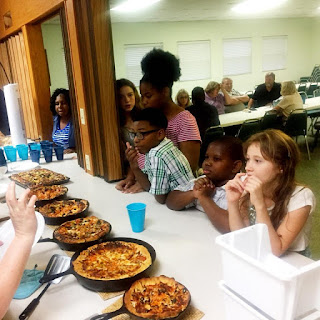 When the pizzas had finished baking, it was time to eat. I had my reservations about pizza made entirely by the kids, but they turned out great. Each pizza was more than two inches of Chicago style goodness and flavor. It didn’t take long for all of the pizzas to be devoured. After everyone had a full stomach, the evening concluded with object lessons about school, friendships, and sticking together. Then the adults gathered around the students and prayers were offered for the success of the new school year.

I enjoyed being a part of the pizza party. I liked the idea of preparing the kids for a new school year by dedicating and blessing them; By letting them know that God and the church want them to have a successful school year. 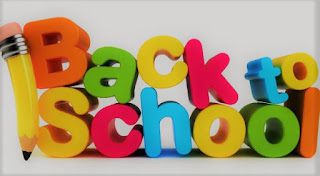 Spiritually, many Christians are like those students who aren’t excited about going back to school. They don’t want to have to study. They enjoy summer vacation and don’t want to to be required to study and learn. God knows that not everyone is interested in learning, but He says that “if you really want to gain knowledge, you must begin by having respect for the Lord. But foolish people hate wisdom and instruction.” Proverbs 1:7 (NIRV)

King David was the type of student who wanted to go back to school. He said, “Lord, teach me what you want me to do, and I will live by your truth. Teach me to respect you completely.” Psalms 86:11 (NCV) God wants excited and eager students. In 2 Timothy 2:15 (AMP) Paul wrote to young Timothy, “Study and do your best to present yourself to God approved, a workman who has no reason to be ashamed, accurately handling and skillfully teaching the word of truth.”

We should never get tired of studying and learning from God’s textbook, the Bible. It outlines God’s commands for successful living and wisdom for our life’s journey. Just like a student who refuses to study and learn will not be equipped to be a success when they grow up, if we as Christians don’t study the text that God has given us, we won’t be successful.

Gentle Reader, Are you excited about going to school? Do you love studying? When was the last time you took the time to study God’s Word in depth? You don’t want Jesus to say, “you don’t understand, because you don’t know what the Scriptures say, and you don’t know about the power of God.” Matthew 22:29 (NCV) Instead, ask God to “teach me how to do Your will, for You are my God. Allow Your good Spirit to guide me on level ground, to guide me along Your path.” Psalms 143:10 (VOICE)