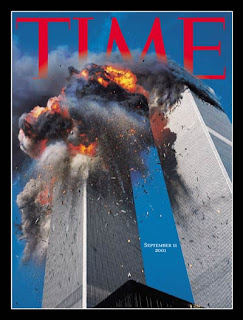 Every year when September 11th comes around, the emotions of Americans are heightened as we remember September 11, 2001. Most Americans can remember where they were and what they were doing when they heard the awful news that airplanes had crashed into the World Trade Center. I was at work when my wife called me to tell me what she was seeing on TV. I turned on my radio and listened all day as the news reports came in. I first wrote of my feelings about this terrible event in 2008 shortly after I started writing on this blog. You can read that post by clicking here.

While my wife and I were studying our family histories, I came across a historical event that I had never heard about before. A couple of things struck me about this event. It happened on September 11th and was one of the worst massacres in American history. The date was September 11, 1857, and the place was Mountain Meadows in Southern Utah. 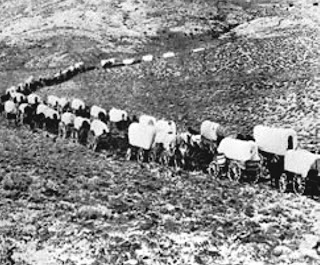 The story starts when Alexander Fancher and John T. Baker along with 140 men, women, and children and 40 wagons left Caravan Springs in northwest Arkansas and headed west to California. Their path took them through Utah. Brigham Young, the leader of the Mormon Church and the territorial governor of Utah had forbidden the Mormons to sell anything to the wagon train. He also declared that, "the Almighty recognized Utah as a free and independent people, no longer bound by the laws of the United States". There was extreme distrust of any non Mormons by the Mormon people.

In early September, the wagon train made camp at a place called Mountain Meadows where there was grass and water for their horses and cattle. On September 7, the group was attacked by Indians and the Mormon Militia disguised as Indians. A child who survived the massacre said, "Our party was just sitting down to breakfast when a shot rang out from a nearby gully, and one of the children toppled over, hit by a bullet." The shots came from forty to fifty Indians and Mormons. The well-armed emigrants returned fire. Soon the gun battle turned into a siege. 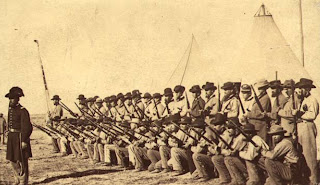 Over the next three days, Mormon reinforcements continued to arrive at the scene of the siege. William Dame, the head of the southern Mormon Militia, was determined to not let the emigrants pass: "My orders are that all the emigrants, except the youngest children, must be done away with." The siege was a standoff and continued for several days. The commanders of the Mormon Militia came up with a treacherous plan for ending the stand-off.

On September 11, they marched across the field to the emigrants' camp waving a white flag. When they reached the camp they promised that they could guarantee the emigrants' safety if they would agree to their terms. The desperate emigrants agreed to the terms: They would give up their arms, wagons, and cattle, in return for the promise that they would be taken past the Indians to safety in Cedar City. They looked upon the Mormons as their saviors. One of the wagons was loaded with the youngest children. A woman and a few seriously injured emigrant men were loaded into a second wagon. Following the two wagons, the women and the older children walked behind. An armed Mormon "guard" escorted each emigrant man. 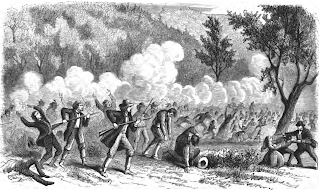 When the escorted men had fallen a quarter mile or so behind the women and children, the command was given, "Halt!  Do your duty!" Each of the Mormon men shot and killed the emigrant at his side. Then they began the slaughter of the women and older children. It was over in just a few minutes. 120 members of the wagon train were dead. The militia did not kill some small children who were deemed too young to relate the story. None of the survivors was over seven years old. The children were taken into Mormon homes. Once the story of the massacre got out, the relatives of the children made an attempt to get them back, but it took over two years and the help of the U. S. Army to return the children to their relatives.

Members of the militia were sworn to secrecy. A plan was set to blame the massacre on the Native Americans. This train was undoubtedly a very rich one. It is said the emigrants had nearly nine hundred head of fine cattle, many horses and mules. They also had a great deal of money and gold besides. Large amounts of their valuables and cattle were taken by the Mormons in Southern Utah. Some of the cattle were taken to Salt Lake City and sold or traded. The remaining personal property was taken to the tithing house at Cedar City and auctioned off to local Mormons. 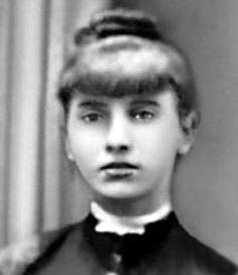 Once news of the massacre began to trickle out, the nation was horrified. Mark Twain wrote about it in his book "Roughing It".  "A large party of Mormons painted and tricked out as Indians, overtook the train of emigrant wagons some three hundred miles south of Salt Lake City, and made an attack. But the emigrants threw up earthworks, made fortresses of their wagons, and defended themselves gallantly and successfully for five days! Your Missouri or Arkansas gentleman is not much afraid of the sort of scurvy apologies for "Indians" which the southern part of Utah affords. He would stand up and fight five hundred of them. At the end of the five days, the Mormons tried military strategy. They retired to the upper end of the 'Meadows,' resumed civilized apparel, washed off their paint, and then, heavily armed, drove down in wagons to the beleaguered emigrants, bearing a flag of truce! When the emigrants saw white men coming they threw down their guns and welcomed them with cheer after cheer." 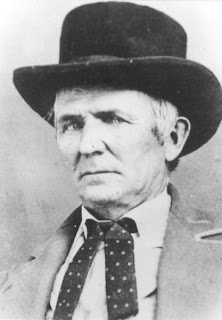 It was twenty years before anyone was convicted in the massacre. Because of Mormon control of the judicial system in Utah, no one was brought to justice. When the Federal government finally stepped in, John D. Lee was offered as a scapegoat and was the only person convicted out of the estimated 50 to 70 Mormon participants.  He was executed at the Mountain Meadows Massacre site on March 23, 1877.

The terrible events of September 11, 1857, have a clear parallel to the terrible events of September 11, 2001. It shows us that throughout history there have been people who believe their religion gives them the right to kill other people. Just look back at the Salem Witch Trials, or the Inquisition, or the Crusades, or the Holocaust. Although many times in history it has been Christian people who have been involved in these killings, true Christianity, following the teachings of Jesus, requires Christians to "Love your enemies, do good to those who hate you", Luke 6:27 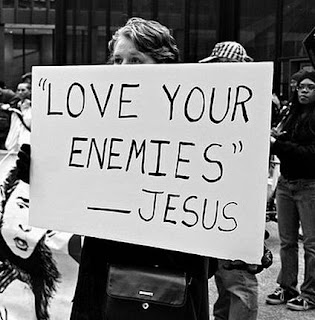 Posted by Richard Lawry at 5:26 AM