It was shortly after eight in the morning when we pulled up in front of the building. Outside was a sandwich board sign with the words “vote here” written above a rippling American flag. Even though it was early, there were several cars parked out front. My wife and I were headed out of town and decided to vote before we left. When we walked into the room to vote, all of the voting machines were in use, and there were a couple of people in line ahead of us. The people working the polls were friendly and helpful. Before long, both my wife and I were standing in front of our respective voting machines. 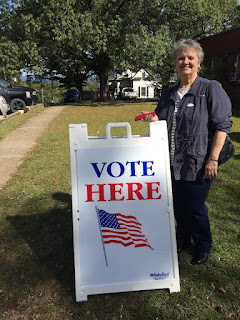 After voting for the statewide races, for the U.S. representative, the state senator, local races, and the ballot initiatives, I carefully reviewed the ballot before giving my final approval. I was now one of the more than two million voters who have cast early ballots. Many people are expecting an above-average turnout for this year's mid-term elections. Political pundits on both sides are calling this election crucial, and are trying to convince those who are on their side to get out and vote. The rhetoric has been harsh, caustic and bitter. 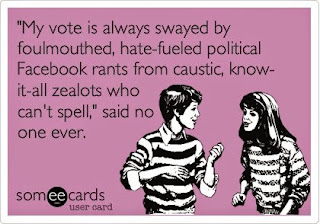 The past weeks and months my Facebook and Twitter feeds have been filled with ugly, hateful, and often downright false political posts. Most of the time they are reposts of someone else's memes or articles. I wonder if anyone's mind has ever been changed by the hateful vitriol that they read on social media. Is this really what Christians want to be known for?

One of the best-known sayings of Christianity is the Golden Rule; “Do to others what you want them to do to you.”Matthew 7:12 (NCV) Most Christians believe this. They would not only agree that it’s correct to treat others right, but also believe in showing respect and kindness. But there’s one area of life where it seems that Christians forget the Golden Rule, and that’s politics. I am amazed by how many Christians become completely uncivil when it comes to discussing politics. In everything else they are polite, but once they start talking about politics or politicians, they become vicious. It seems that they forget that the Bible says in Romans 12:10, “Love each other with genuine affection, and take delight in honoring each other.” 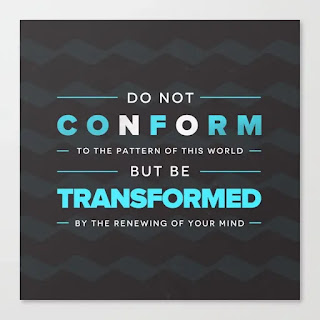 When we as Christians are tempted to fire back when confronted with beliefs that we don’t agree with, we need to listen to the advice given in Romans 12:2 (NKJV). “Do not be conformed to this world, but be transformed by the renewing of your mind, that you may prove what is that good and acceptable and perfect will of God.”

When we feel that our beliefs are under attack, the basic human response is to fire back. We let our natural, carnal, human emotions dictate our behavior. We feel anger and want to lash out. We feel fear and want to defend our beliefs or attack perceived wrongs. But, is that how a Christian should handle conflict? In Proverbs 15:1 (NET) Solomon wrote these words of wisdom, “A gentle response turns away anger, but a harsh word stirs up wrath.” And James wrote in James 1:19,20 (ISV) “You must understand this, my dear brothers. Everyone should be quick to listen, slow to speak, and slow to get angry. For human anger does not produce the righteousness that God desires.” 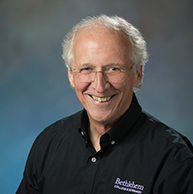 I am not suggesting that there is never a time when Christians should speak up for their beliefs, but I have noticed that often we as Christians are slow to listen but quick to speak and get angry. My social media feeds are filled with angry Christians. Some answer every difference in opinion by angrily returning fire. Your political opinions do matter. Your vote does matter. But your opinions and votes should not be the most important things in your life. As Christians, our ultimate hope does not rest on political candidates or political power or political initiatives. Speaking of voting in elections, John Piper wrote, “Its outcomes do not give us the greatest joy when they go our way, and they do not demoralize us when they don’t… We deal with the political system. We deal with the news. We deal with the candidates. We deal with the issues. But it is not the great thing in our lives. Christ is. And Christ will be ruling over his people with perfect supremacy no matter who is elected and no matter what government stands or falls.”

I’m thankful to live in a country were your vote matters and my vote matters. I’m thankful that we can be a part of the political process. By all means vote. But remember that the Bible informs us that “the world is passing away along with its desires, but whoever does the will of God abides forever” 1 John 2:17 (TLV) Don’t let politics consume you and cloud your judgment. Don’t be complicit when slander is explained away as righteous anger, and winning arguments is more important than being truthful. 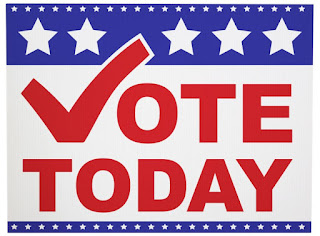 Gentle Reader, your vote matters. When you vote for someone to represent you, whether in the local, state, or national government, it is important to vote for someone who shares your principles. But your vote this year is not the most important vote you will cast. Every day you have to vote for who you want to represent you that day. Do you want Jesus to represent you, or are you willing for Satan to be your representative? “If you don’t want to serve the Lord, you must choose for yourselves today whom you will serve… As for me and my family, we will serve the Lord.” Joshua 24:15 (NCV)  Who will you choose to vote for today? Your vote matters!